Given that they’ve just launched an entire new consumer product line, this group of UVM employees is surprisingly calm, even content. Alfina gazes at a stranger and flicks an ear. Gillian nibbles a student’s sleeve. 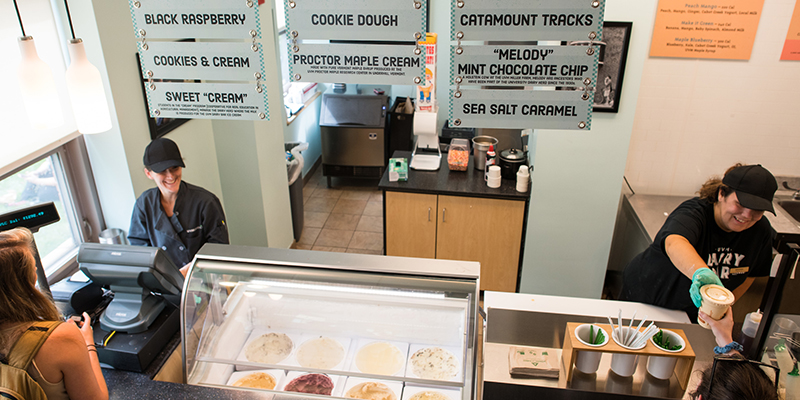 Both are members of UVM’s teaching herd, 48 cows under the care of students in the university’s Cooperative for Real Education in Agricultural Management, or CREAM, program.

Until recently, the nearly 100,000 gallons of milk the cows produce each month at a high-tech teaching barn and milking parlor at UVM’s Spear Street farm went to Agri-Mark Cooperative mostly to make Cabot cheese. But beginning in the late summer, ice cream in seven flavors (and counting) was added to the herd’s, and the students’, portfolio.

“Anything that helps UVM students realize what we do in CREAM” – that is feed, milk, and attend to the health of the herd 24/7 and run a complex business – “is awesome,” she says.

The opportunity is also culinary.

Those ice cream flavors, from Proctor Maple Cream, made with maple syrup from UVM’s Proctor Maple Research Center, to Sweet CREAM to Catamount Tracks, are earning rave reviews from students, faculty, staff and community members at a revamped version of a university legend – the UVM Dairy Bar – that opened in the Davis Center Marketplace on the first day of classes this semester.

The new dairy bar has big shoes to fill.

Its predecessor opened in 1950 in Carrigan Hall – razed in 2006 to make way for the Davis Center – as the retail outlet for the ice cream Dairy Science faculty and students made using milk from the UVM herd. It was a favorite for generations of UVM students and Burlington residents. But the operation became too costly as time went on. The university was forced to shutter it in the early 1990s, leaving legions of fans bereft.

“The question I got more than any other when I met alumni or people in the community was, ‘When are you bringing the Dairy Bar back?’” says Tom Vogelmann, dean of the College of Agriculture and Life Sciences.

The answer was always a vague one until Kate Finley Woodruff arrived in the deans’ office in 2015 as associate dean for student services. Finley Woodruff had spent 18 years at Cabot Creamery learning how a commodity like milk can be transformed into a range of branded products with wide appeal. “As soon as I got the job, I began thinking about the value-added aspect and how what we represent here at the college” could form the basis of a compelling brand, she says.

Vogelmann, who had been thinking about the same issue with other members of his team for years, was intrigued. When Finley Woodruff broached the idea of re-launching UVM ice cream, he gave her the green light to investigate further.

Milk from the CREAM herd at the beginning of the supply chain was a given. Next step, the St. Albans Coop signed on to produce the mix of milk, cream and sugar that provides the raw material for ice cream. Final production would come from Wilcox Ice Cream in Arlington, Vermont, where the “Ice Cream Master” is Howard Wilcox, a 1966 UVM grad who first honed his skills at the original UVM Dairy Bar.

Wilcox’s ice cream bears more than a passing resemblance to the old Dairy Bar product.  “I would say that the formulas that we are making for UVM today are very similar or maybe exactly what was used at the Dairy Bar,” Wilcox says.

Retail was the last critical step, and UVM Dining quickly partnered on the effort.

“It was a good fit for our Vermont First program,” which sources locally grown food for the university’s dining program, says UVM Dining director Melissa Zelazny. When, late in the spring 2017 semester Ben & Jerry’s announced it was vacating the space it rented in the Davis Center, a plan to reboot the Dairy Bar in DC went into overdrive.

The production team came through; Wilcox delivered its first shipment of ice cream to UVM Dining in mid-August. UVM Dining did its part, installing ice cream storage and serving equipment in the old Ben & Jerry’s space by early August.  And Finley Woodruff’s old friends at Cabot donated design services; the Dairy Bar had a logo, color scheme, signage and large wall mural, all in a fitting retro style, by late August.

The effort paid off. Since the opening, the Dairy Bar has sold over 300 gallons of ice cream, serving more than 250 people on its best day. For Family and Homecoming Weekend, the Dairy Bar held a throwback 75 Cent Cone Day and doled out more than 650 scoops. And Brennan’s and the residence halls have served another 2,000 gallons.

The space has also given UVM Dining a venue for smoothies, which are popular with students.

“We’re happy,” says Zelazny.  “Every day it seems sales go up, and people definitely like the ice cream.”

There’s an added bonus for Vogelman, over and above bringing back a dearly loved campus tradition.

“UVM ice cream highlights the food system we are creating here on campus, and the economic ripples created throughout Vermont,” he says. “The students in CREAM are getting hands-on understanding — not only of dairy management, but of how their work fits into the overall food system.”

To one alum, it only makes sense that the Dairy Bar is back.

“I think it’s great to have something that reconnects to the past and connects to such an important part of UVM’s history,” says Fred (Chico) Lager, Class of ’75, who with his wife, Yvette Pigeon ’80 G’87 ’99, has supported other efforts to preserve the Dairy Bar’s memory.

Lager should know. He’s the former CEO of Ben & Jerry’s.