Author Michael Moss Exposes How the Food Giants Hooked Us

Have you ever snacked on a bag of salty, crunchy chips and gotten the feeling that you just couldn’t stop? You’re not alone. That irresistible sensation is completely by design. It’s just one of the ways the processed food industry tempts us to eat more of “the food we hate to love,” as author and journalist Michael Moss illuminated at the 2017 Aiken Lecture on Nov. 1. 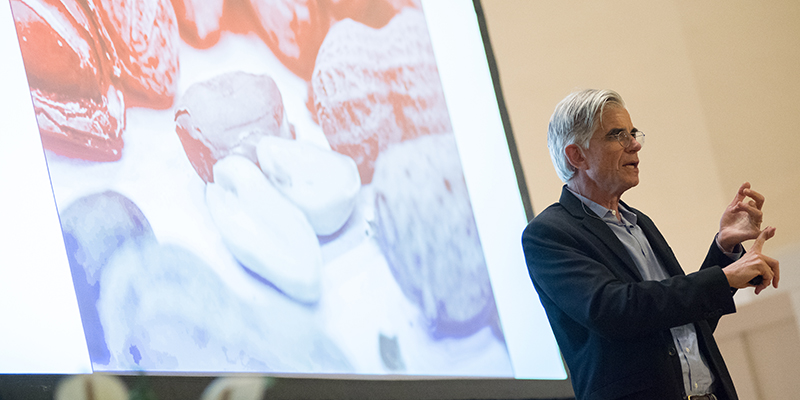 Drawing on his best-selling book, “Salt Sugar Fat: How the Food Giants Hooked Us,” Moss took the audience, sitting in a packed Ira Allen Chapel, on an exposé of this “unholy trinity,” the ingredients the trillion-dollar industry “relies on to make their products easy, irresistible, and cheap.”

Moss used potato chips as an example. The satisfying “mouthfeel” you get, said Moss, is exactly what the industry is after; chips can be as much as 50 percent fat. Another key part of the chip equation is their crunch: The industry has figured out that the more noise a chip makes, the more of them you’ll want to eat.

And consumers seem to be paying the price. According to the NIH, more than one in three adults, and one in six children and adolescents, are considered to have obesity in the United States. Those numbers have big implications – some estimate associated healthcare costs at more than $150 billion nationwide.

“Crawling around the food system is like reading a detective story,” said Moss, whose work as an investigative reporter with the New York Times on the dangers of contaminated meat won him a Pulitzer Prize in 2010.

What Moss has unearthed in his food systems detective work is lots of deliberate product development, and marketing, to make us consume more. Some tactics, says Moss, echo those used by big tobacco. (In fact, Philip Morris owned Kraft Foods until 2007.)

Moss points to Lunchables as a case study. In addition to the salty, fatty chow inside every package, it’s marketing that makes the product so successful with children, said Moss. “Lunchables give kids the feeling of empowerment.” Their slogan: “Lunchtime is All Yours.”

Where do we go from here? Moss said the work starts when we’re young, when our strongest food memories and associations are formed. “In talking with kids, we need to help them see information about food as empowerment.”

Since information is power, when you’re reading an ingredient list, Moss suggested paying attention to what order things are listed (the biggest item comes first, and the smallest comes last). “You have to be careful in the grocery store,” said Moss, as he walked through the ingredient list of a frozen broccoli, potato and cheddar dinner, in which broccoli was the very last ingredient.

As for the larger food industry, Moss hopes produce growers and the makers of other whole foods will have fun marketing their goods, as processed foods titans have, rather than preaching. Moss worked with an ad agency to test this fun-first approach, and developed a marketing campaign for the much-loathed vegetable, broccoli. Taking a page out of the processed food industry’s handbook, the campaign was built on a fictitious brand battle, pitting broccoli against kale, the trendy vegetable of the moment. One ad from the campaign read: “Broccoli: Now 43 percent less pretentious than kale.”

During his visit to campus, Moss also spoke with a group of 25 food systems students (below). He seemed to speak to them as he ended his talk with a call for exposing the truth behind the things we eat. “We have to take an investigative reporting approach to food systems.”

-Andrea Estey is a writer and digital content strategist for the University of Vermont.