Making the Leap from Science to Sheep Farming

Annie Hopper never considered farming as a career. The Houston native, who studied conservation biology at Middlebury College, was going about her life pursuing a profession in science while interning for the U.S. Fish and Wildlife agency in Washington, D.C. But something felt off. Her heart wasn’t in it and she longed to be back in Vermont. 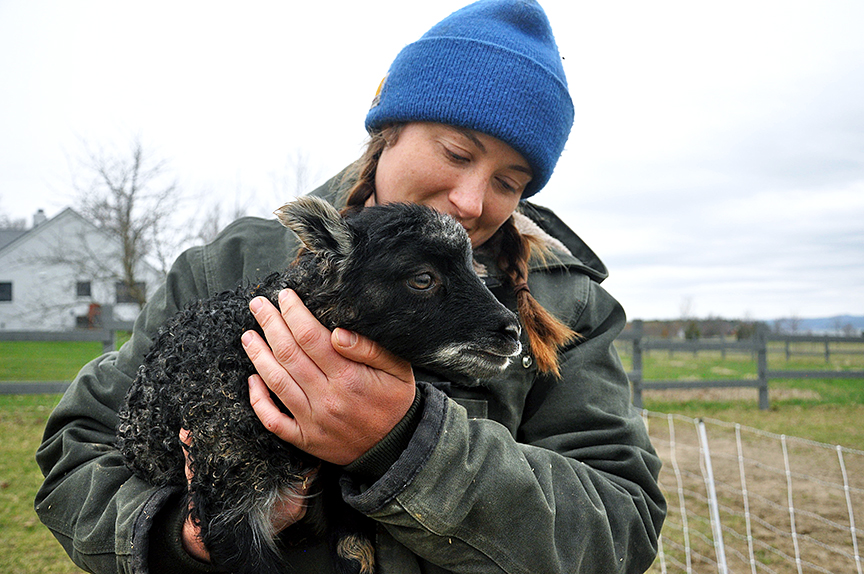 “I’ve always had a knack for science, but I’m also the person who wants to hold animals and be outside,” she says. “I was having an existential crisis. I was applying for jobs in Washington, D.C., and hoping I didn’t get any so I could just move back to Vermont and buy some sheep.”

That soul searching prompted Annie to return to Vermont in October 2015 with hopes of raising livestock. She spent the first few months building a barn and fence on her parent’s property in Panton. She bought five sheep and a few months later she enrolled in the UVM Farmer Training Program.

“It’s easy to figure out how to handle animals, but not how to make sheep into a product.” says Annie, whose grandparents were commodity farmers in Kansas. “You’re not going to learn marketing and finances from an apprenticeship working on someone else’s farm, and the Farmer Training program is where you can learn how to run a farm as a business.”

She focused on sheep because they are versatile for wool, sheepskin, and meat. Sheep are also small enough for Annie to handle on her own (she puts them in the back of her red pickup truck when she needs to transport them). She eventually added two alpacas to help guard the sheep, and eight baby lambs were born on the farm in April.

Annie is in the process of buying a flock of grass-fed meat sheep from Pennsylvania. About 20 of those sheep will be slaughtered on her property and processed by Green Pasture Meats, and she will sell her product to local farm stands.

An article in California’s Press Democrat points out that most Americans don’t eat lamb. The annual national average consumption is eight-tenths of a pound per person. In New Zealand, by contrast, it’s 50 pounds per person per year, and in Australia, it’s 37 pounds. Lamb consumption in the U.S. tends to be heaviest on the country’s coasts.

“I would love to have a medium-scale production,” says Annie. “Here in Addison County, there’s a real passion for local food, but there’s not a lot of local lamb available.”

She hopes her farm will change that. “When I came back to Vermont, I was really looking to tap into a market, and lamb seemed like a good choice,” says Annie. “I’m ready to make this happen.”