Farm to Preschool Movement Creates a Culture of Inclusion and Generosity

For close to a decade, the Burlington Children’s Space (BCS) been working to develop a culture of food security to benefit the children and families that they serve.

The preschool is located in Burlington’s Old North End and serves a racially and economically diverse community. Close to half of the school’s student base is below the poverty line, meaning children would qualify for free or reduced lunch. The school’s tuition works on a sliding scale. Families pay tuition based on their income levels, and different amounts are covered through state subsidies based upon need. Half of the students at BCS are subsidized completely. 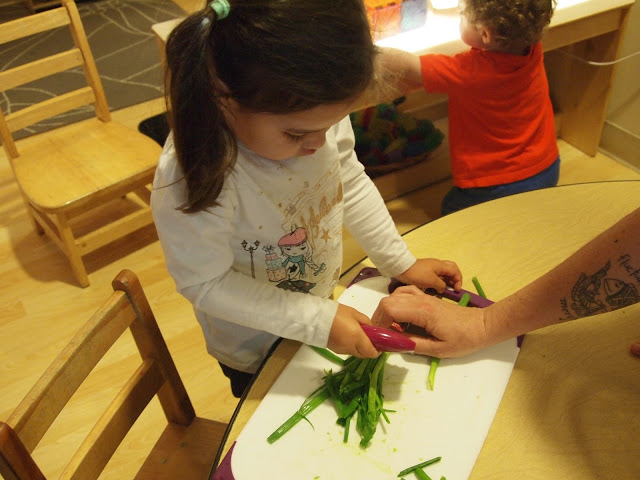 The school has often been described as a promising example in the burgeoning farm to preschool movement, an offshoot of the farm to school movement that has been developing in the United States for the past 20 years.

We talked to school director Sarah Adams-Kollitz and school chef Erinn Simon about their place in the national farm to school movement.

In reality, the school does not benefit from the same grant that would classify it as part of the USDA Farm to School Program. During Adams-Kollitz’ time as director, BCS enrolled in the Child and Adult Care Food Program grant, which provides federal funds to public schools and senior centers.

The grant money reimburses a certain amount for every breakfast, lunch, and snack that is served to children during BCS school hours. Erinn explained that guidelines for meals are very strict, and that appropriate food groups must be represented in each meal, while sugary drinks are outlawed from the program.

In addition, a certain amount of food must be served to each child at every meal. Erinn cited this guideline as one of the many reasons she respects the grant’s rules. Instead of cutting children off after a certain amount of food, they are encouraged to eat while being reassured there will always be enough food there for them. While BCS may not technically adhere to the guidelines that other schools do in the farm to school program, it exemplifies the culture of food that the farm to school movement inspires in others.

The school prides itself on developing an atmosphere where healthy, sustainable foods are a part of the children’s everyday reality. Kids help to cook fresh breads and baked goods and often take field trips to the Intervale to spend time in gardens.

Food is sourced locally whenever possible. Produce is bought from local farms, while the Intervale Center Gleaning and Food Rescue Program provides fresh produce between the months of July and October.

Perhaps even more significant is that BCS involves both parents and the wider community in its efforts to develop a healthy and loving culture surrounding food. They host a family dinner for the community every other month in which they regularly feed roughly 50 people. They offer cooking classes and are creating a cooking appliance lending library. Also, they send 12 take-home bags of food each week, enough to feed six people.

BCS is a unique institution in that it has nurtured a bond with the community that surrounds it in order to further strengthen the school’s food program. But both Sarah and Erinn stated that this was the key to their success.

They recited one of the directives and deeply held beliefs at BCS: “Use food to build a culture of generosity and inclusion. The cost of the food is a small investment compared to the trusting relationships you will be able to develop.”

-Alison Bell is a senior at UVM majoring in English.