Kate Daloz grew up in a geodesic dome in Glover and lived a rural, do-it-yourself lifestyle with her family. Her counterculture parents, who left Cambridge to flee the trappings of post-war America, found solace in raising a family in the Northeast Kingdom, Vermont’s most rural region.

Now a freelance journalist, Kate recently published her first book, “We Are As Gods: Back to the Land in the 1970s on the Quest for a New America.” 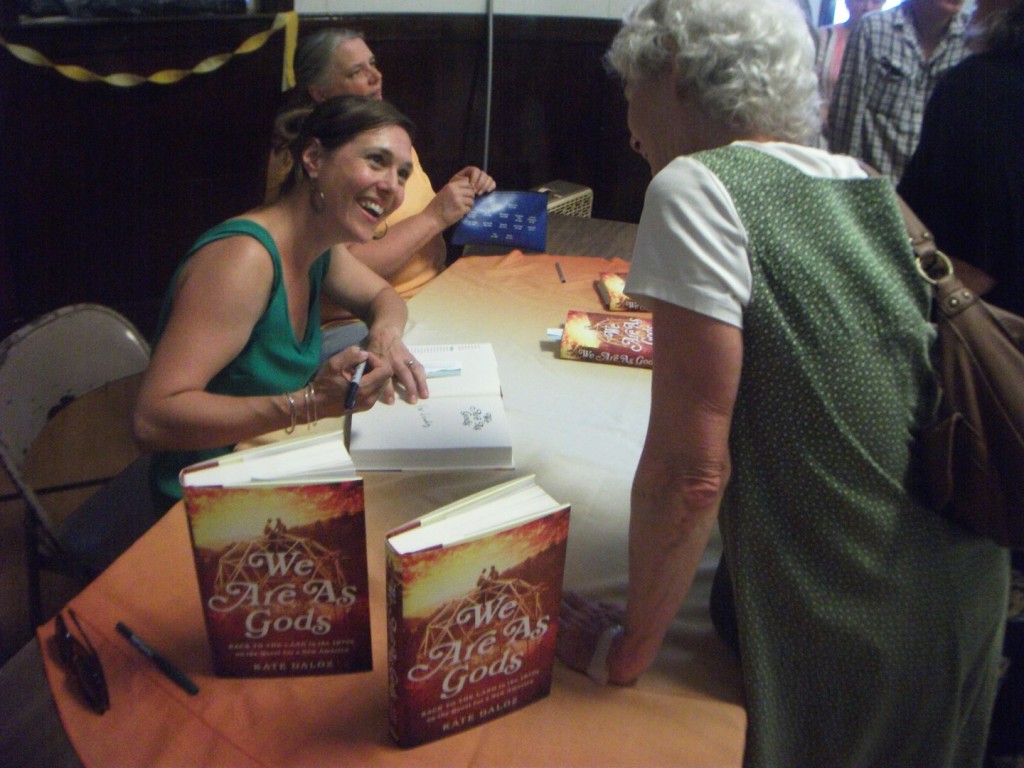 Kate Daloz signs copies of her new book “We Are As Gods: Back to the Land in the 1970s on the Quest for a New America” at a homecoming event at the Glover Town Hall. Photo by Kevin O’Connor/VTDigger

In her book, she notes “Every last leaf and crumb of today’s $39 billion organic food industry owes its existence in part to the inexperienced, idealistic, exurbanite farmers of the 1970s, many of whom hung on through the ’80s and ’90s, refining their practices, organizing themselves, and developing the distribution systems that have fed today’s seemingly insatiable demand for organic products.”

We talked to Kate, who now lives in Brooklyn, about her experience with the back-to-the land movement, the movement’s impact on food systems today, and her deep affection for Vermont.

What made you want to write this book?

Even though I grew up in a back-to-the-land community, I had a lot of questions about the movement. But when I went to look for a book that would help me understand, I found that none existed. That’s when I realized that my personal questions had become historical questions, and that other people might be interested in reading the answers I discovered, especially if I could embed them in a compelling story.

What were some of the questions you had about the movement?

How long did (the back-to-the-land movement) last? When and where did it start? Was it nationwide or just in Vermont? What was the relationship between rural communes and non-communal homesteaders? What was its impact on today’s food systems, organic markets, and American cuisine?

It seems like demand for local or organic food has only really started to gain momentum in the last decade. Why do you think it has taken this long, and do you think the back-to-the-landers had any idea they would have such an impact?

That’s such a great question. I’m not sure I know enough about the policy issues yet to say why it took until the last decade to catch on, but I will say that the back-to-the-landers’ sense of their own influence would depend entirely on when you asked. If you asked in the early to mid-1970s, I think many of them would be like, “Hell yes, we’re changing the world!”

But if you asked them at any point in the 1980s and most of the way into the 1990s, I think they would be extremely devastated and demoralized. A lot of back-to-the-landers, like people in the counterculture generally, felt that the movement failed entirely—or at least, sold out entirely—in the 1980s. The ones who held on in little ways until the past decade are just now really seeing the impact of their work, and I think it’s immensely gratifying for them.

It’s interesting that your parents moved from the city to Vermont, while you ended up leaving Vermont to go to the city. Do you think you’ll ever return?

I return as often as I can. But I don’t currently have any plans to move back full time. I really like living in Brooklyn, and I’m married to someone who likes it even more. But my ongoing relationship with Vermont and my ability to visit often is one of the things that allows me to be happy in the city.

I also try to make sure my children have long stretches of time in Vermont. It’s really important to me, not just that they feel comfortable in the woods, but that they feel an emotional and cultural connection to Vermont. My daughter, who is 7, often says that she is going to move to Vermont when she gets older, and I always tell her that nothing would make me happier.