From Africa to Vermont, and Still Farming

This piece was originally published on the UVM Food Feed in September 2014.

Refugees will often give up customs, language, and rituals in their new culture, but seldom their food. David Bonsana, born and raised in the Republic of the Congo and now a Vermonter, is no different. His journey from Africa to Vermont was difficult, but as we stand in his lush garden, taking in the scenery, his tranquil demeanor does not reflect his struggle. 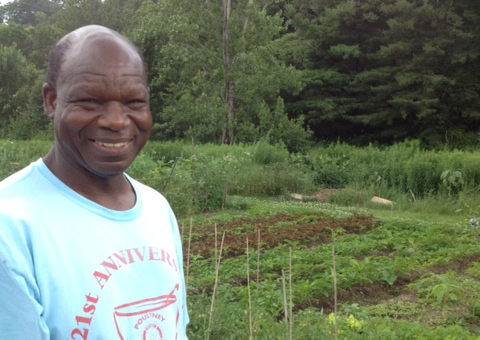 I met David two summers ago, in my Environmental Cooking class. He was there to learn to cook, he said, because his wife was working, and he wanted to help her. We are standing today at the New Farms for New Americans site in Burlington, next to the Ethan Allen Homestead, admiring his garden plot, so beautifully rowed with vegetable varieties that knit together his Vermont and African homes.

David told me about growing up in the capitol, Brazzaville, with his brothers and parents. With fond memories, he spoke of leaving the city every weekend to work on his parents’ 80-acre orchard with his father, brothers, and the hired men there. The orchard produced mangoes and safou (a buttery, calorie-dense fruit) for markets in the capitol. His father loved this ancestral land; when he died (and then his mother soon after), when David was 15, the youngest and hardest hit, David took it upon himself to continue his father’s legacy. He worked every day after work and on weekends. He became an expert at growing his own food, and when he grew up and took the helm as the assistant to the prime minister, he still worked on his father’s land every week. 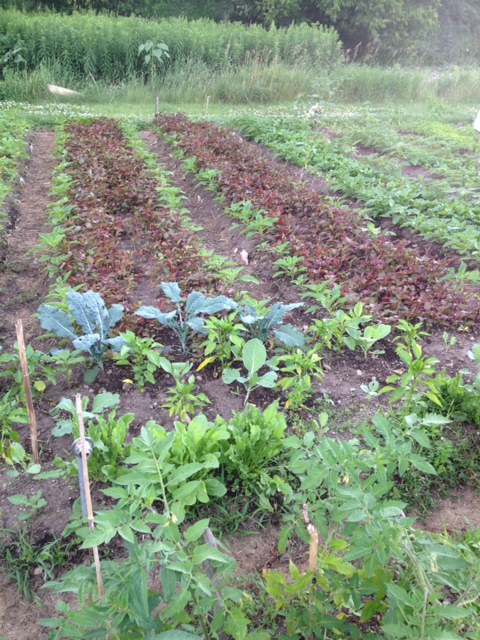 His Vermont garden is meticulous. There isn’t an inch of space unplanted. David is quick to point out that his wife, Helene, is central to what and how their food is planted, as she is particular about the garden’s aesthetics. He said they have worked together on their land almost every day during the growing season for ten years, and just last year they added another 10’-by-20’ plot.

He escaped the civil war in the Republic of the Congo with Helene and their three young children in 1997 for the Ivory Coast, believing their stay would be temporary. There was no land to farm, and as a refugee he was not allowed to work in his new home because of his refugee status. David, a religious man, said a Catholic priest gave his family a parcel of land in the diocese, where he was able to grow enough for his family and sell in the market. Helene grew cassava, also known as manioc or yucca, and made flour from it (as it is one of the main ingredients of the central African cuisine). Helene made her own baby food, especially pureed spinach, which gave her babies lots of iron. David said that without that piece of land, his family would have starved.

As we walk the rows, David identifies his vegetables. There are eggplant varieties (three different kinds), string beans, African spinach (with small, pointed leaves), bell peppers, sorrel, carrots, lettuce, cucumbers, peas, onions, endive, Chinese cabbage, and at least 10 varieties of amaranth. Between rows and on the sides of each earthen mound are herbs like Thai basil, sage, parsley, and cilantro. When I asked him where he got some of the more exotic seed varieties, he said they came from family back home.

David said the Ivory Coast was home for only seven years, until it, too, broke out in civil war. They fled with whatever they could grab, and once again became refugees uprooted from their home. Fortunately, through a church sponsorship, David and his family landed in Burlington to start life again. Today, David works for custodial services at UVM and will complete his Master’s in Education in December. Helene, once the accountant for Brazzaville’s city council, is an LPN at UVM Medical Center. Their three children all attended college and are working around the country. As David tells me about the difficulty of farming in a cold climate, he stops mid-sentence and talks about his land in the Republic of the Congo. He dreams of going back to his family farm when he completes his degree to start a foundation for vocational training for the area’s youth, who have little opportunity for skill development.

David points out the compost pile in the left-hand corner. He is adamant about the health of his soil, and his practice is organic. He’s vigilant about pests, carefully monitoring each plant as he walks, picking off bugs and dead leaves to prevent any infestation. When I ask him what some of his favorite vegetables are, he beams as he says, “American asparagus,” which reminds him of the wild asparagus that grows everywhere in the Republic of the Congo. There, it is thin and bitter; here, he says, it’s thicker and sweeter, and he’s going to plant some next year. 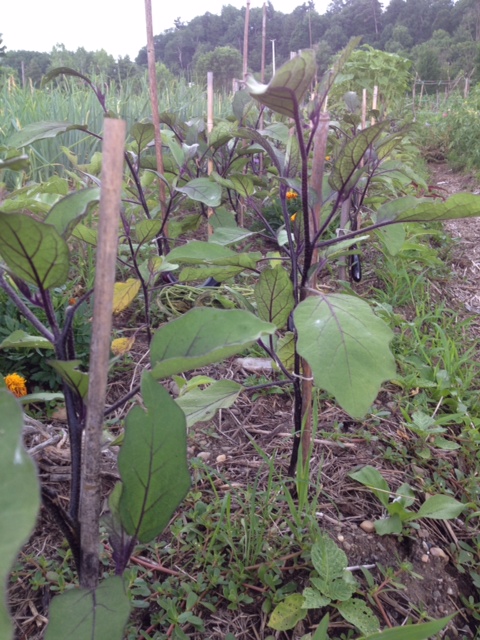 David’s native language is French (he speaks a total of four languages), and his cuisine reflects his Central African roots, with a Mediterranean flare. His dinner plate looks like this: many vegetables, a bit of dried fish or chicken, and rice or cassava ladled with peanut sauce. His staple foods include African spinach, amaranth leaves, peanut sauce, dried fish, eggs, chicken, eggplant, and, of course, the fresh vegetables in his garden. He wishes he could grow cassava for his starch, and a vegetable called moussoss, which he claims is a natural treatment for diabetes.

After 17 years in exile, and with an American passport in hand, David was finally able to return to the Republic of the Congo last year. He pauses, takes a deep breath, and speaks sadly of the beautiful land he once knew. Many members of his and Helene’s family died in the war. The ravages of what’s left are clearly painful to him. “Nothing is the same,” he says. “There’s no clean drinking water, corruption is at an all-time high, and worst of all, people have no hope.” His land is still there, now equally divided among his remaining brothers, and is able to support them.

David and Helene grow as much food as possible and freeze most of it for the winter. As a refugee who knows hunger, David understands that food is not always easily accessible. He is unbending in his need to have enough. His attention to what he calls “the cycle of life” means that he stay aware of what needs to be planted, harvested, replanted, rotated, protected, and eaten. Watching his garden grow “develops his mind,” he says.  “It’s relaxing and healthful,” he says, but most important, he and his family are food secure.

It starts to rain, so David and I huddle under the low-hanging roof of the tool shed. When I ask him what his favorite dish is, he tells me about Saka-Saka (Cassava Leaves). Here in Vermont, he substitutes the cassava leaves with African spinach and amaranth leaves from is garden, his eyes lighting up as he tells me how to make it.

Serve as a side with the fish or chicken and steamed rice. Top with peanut sauce.

*Many Central African cooks use baking soda, or a piece of rough potash, to give a salty flavor to soups and sauces. This replicates the flavor of traditional salts, which are obtained by burning the barks or leaves of certain plants. This was necessary because there is no other source of salt in much of Central Africa.

Serve over rice with fish or chicken.