Why Vermont Farms Are Exploring Pigs and Whey

“When people tell me they’re thinking about getting into cheese, I tell them to get pigs.” Mateo Kehler of Greensboro’s Jasper Hill Farm pauses. “In fact, I wish we’d gotten pigs before we got cows.” 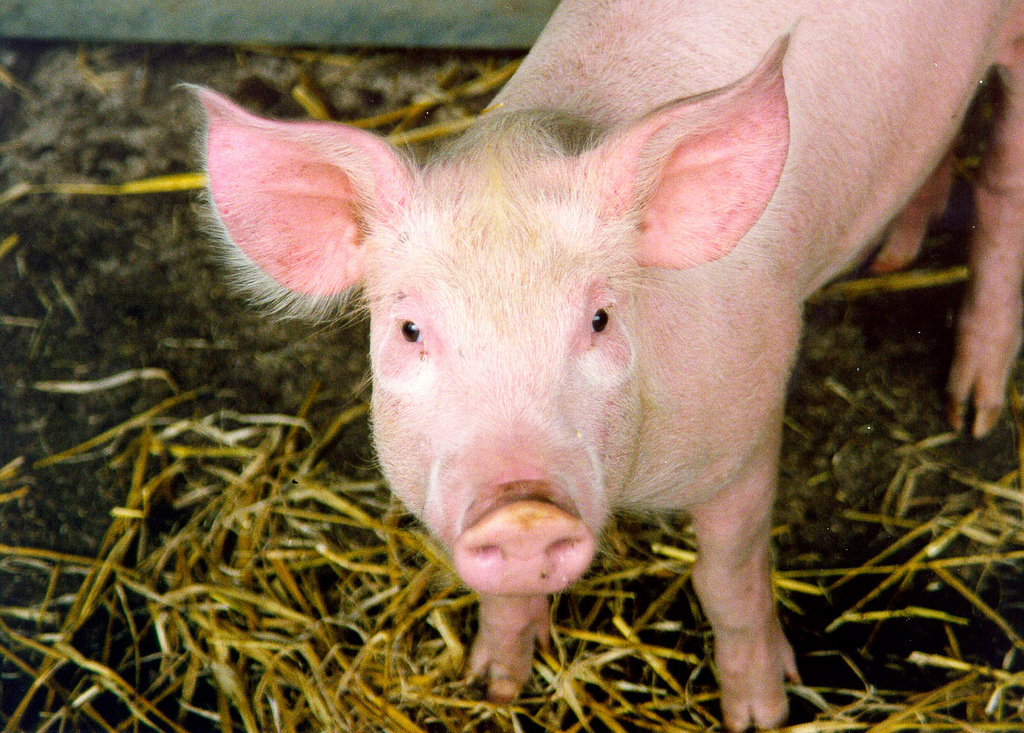 Pigs, of course, have long been central players in farmstead operations, turning the various inevitable wastes of any farm into valuable meat. And they have a particularly special place on traditional dairies, given that the typical conversion of fluid milk to cheese is only about 20 percent, meaning that 80 percent of the weight of the milk is left over as whey. Feeding whey to pigs is a tradition worldwide. For example, the hogs that become Italy’s famous prosciutto de Parma are traditionally raised largely on the whey from the production of the region’s other specialty, Parmigiano Reggiano. And pigs are generous fans of cheese itself, including scraps, overly experimental batches, or those that go awry.

Today, many large-scale cheese operations spray their whey on fields, or mix it into manure lagoons. It can’t just be dumped down the drain, because its high acidity and protein content can cause problems. Increasingly, large companies such as Cabot process whey into protein powder and similar supplements, but few American universities have seriously taken up the question of whey as a supplemental ration, and the perishable nature of the product seems to make it impractical for industrial-scale hog operations. Whey is a heavy liquid that doesn’t store very easily. In the winter it is prone to freezing; in the summer it can quickly spoil.

“Pigs will turn their noses up to whey when it passes a certain point,” says Evan Bendickson, project manager for VT99, a new project between Jasper Hill Farm and nearby Pete’s Greens.

Still, a handful of Vermont farms are experimenting with pigs and whey.

Jasper Hill Farm, based in Greensboro Bend, has had a pork operation for several years, powered by the whey left over from its renowned cheesemaking, but this year the farm has expanded its pork project. It has teamed up with Pete’s Greens in Craftsbury, a diversified vegetable farm, so that Pete’s is now providing vegetable scraps for the pigs, Jasper Hill is providing whey, and both farms are raising the pigs on their respective land, cycling between pigs, vegetables, forage crops, and grazing cattle. The project, called VT99, increases the land base available to both farms and provides additional feed for the hogs. The two farms’ primary products—cheese and vegetables—are incorporated into the end-stage of the pork: sausages featuring Pete’s Greens beets and Jasper Hill cheese.

To overcome the logistical challenges of slaughtering in Vermont (the state’s small slaughterhouses often can’t accommodate large batches of animals in the fall, when most livestock producers and homesteaders take their animals in to be processed), VT99 has chosen to keep its processing in-house; in fact, the name “VT99” comes from the number of the Vermont State license of their processing facility. Their animals are slaughtered at Northeast Kingdom Processing in Lyndonville, then processed at the new facility, located at Pete’s Greens. The pork products are currently sold to some of the same stores that sell Jasper Hill cheese in New York City, and the farm has plans to build the VT99 inventory and brand both locally and through Jasper Hill’s distribution network. 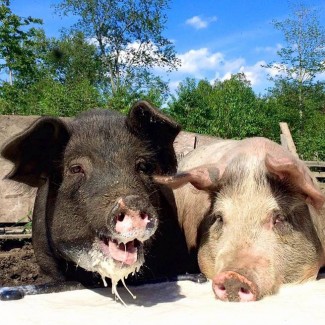 Blue Ledge Farm in Leicester, a goat dairy that also uses its whey from cheesemaking to feed pigs, is getting around the slaughtering bottleneck by purchasing feeder pigs in the fall and getting them slaughtered in the spring, the opposite of the typical schedule. “That’s when the piglets are the cheapest and the slaughterhouses have openings,” explains farm owner Hannah Sessions. “It also works well with our flow of milk production.”

Hannah gives the whey from Blue Ledge cheesemaking to pigs at her own farm and to a neighbor who feeds it to pigs as well as to beef cattle. although the production of pork is quite small at Blue Ledge—once peaking at 15 pigs per year and now down to just a few—Hannah echoes the general agreement that pigs belong on dairies. “It just makes sense,” she says.

But there’s another challenge facing Vermont farmers who feed whey to pigs: marketing their whey-fed pork.

“For a lot of people, it’s a new concept,” says Sebastian von Trapp, of von Trapp Farmstead in Stowe, where pigs were added to the dairy operation five years ago. At the time, the farm was beginning to shift to cheesemaking from shipping milk to Organic Valley. A friend and employee, Ignacio Villa, suggested that pork would be another way to add value to the farm, so Ignacio and the von Trapps partnered to create the brand Vermont Whey Fed Pigs. Pigs were raised at the von Trapp farm and fed whey from the cheesemaking operation, Ignacio was the marketer and production manager, and pigs were bought in from other local dairies in an attempt to build a brand and market demand.

Part of the goal of the operation was to create a set of guidelines and even a certification for a “whey fed” label in Vermont. The amount of whey a pig can consume varies based on breed, age, and type of whey being offered, but most of the farmers interviewed for this story said they were feeding an average of about 10 gallons per pig, per day. Of course, a farmer can always offer less whey and supplement with other rations such as grain feed, day-old bread, or culled vegetables, so at what point is a pig “whey-fed”?

The USDA Food Safety and Inspection Service regulates what meat producers can put on their labels; for terms that aren’t legally regulated, farmers must essentially provide paperwork to the USDA stating that their practice matches what they would like to put on their label. Ignacio Villa and Vermont Whey Fed Pigs received approval from the USDA in 2014 to use the claim “whey-fed” on their labels, defining their protocol as a minimum average of 2.5 gallons of whey per day, as well as clarifying that the farm must bring in piglets before two months of age, and have pasture and shelter available.

A larger project to create a whey-fed certification—similar to that for certified organic, although smaller in scale—has potential, although it’s not something that Sebastian von Trapp is working on at the moment. “It’s a very long-term project,” Sebastian says. “Maybe a 20-, 30-year project” to create a set of standards and a certifying body.

However, even with their protocol, Vermont Whey Fed Pigs found the market challenging. A pastured pig grows more slowly than one conventionally grain fed, and even with a “free” source of protein in the whey, expenses add up. For Ignacio, the costs eventually outweighed the amount of time he was willing to spend marketing the product rather than farming. “We have to be responsible about the environment, what we do with our genetic materials, how we treat animals,” he says. “All those things create costs.”

Last year, Ignacio and the von Trapp farm parted ways, and Vermont Whey Fed Pigs is in the process of selling its inventory of pork, although the von Trapps continue to sell whey-fed pork under their own name.

Despite the challenges of raising and marketing whey-fed pork, pigs continue to take their rightful place on dairies. Like many of Vermont’s small food businesses, these whey-fed pork producers are hoping that consumers will find the high quality of the product, and its philosophical underpinnings, worth the price tag. All the farmers interviewed for this article cited flavor as one of the key benefits of whey-fed pork. Mateo Kehler calls it “the best sausage I’ve ever had.”

Adam Longworth, chef-owner of the Common Man restaurant in Warren, is one of many chefs who agree. He finds whey-fed pork, which he buys from the von Trapp farm, “so delicate and tender that it doesn’t need any heavy sauce.” He likes to serve the pork with pasta—“I love it with pasta,” he says—along with broccoli raab and a good olive oil.

“Once you try whey-fed pork,” Adam says, “you can’t eat anything else.”

-Caitlin Gildrien is a writer and graphic designer in the Champlain Valley of Vermont.

This piece was originally published in the summer issue of Local Banquet and was republished with permission.