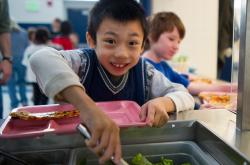 This fall is a big season for childhood nutrition in the U.S. The “Healthy, Hunger-Free Kids Act” (commonly known as the Childhood Nutrition Act) is up for reauthorization. This is particularly important for those of us who support stronger nutrition requirements (including more fruits and vegetables) in the 2010 Act.

Everyone is eager to know whether those mandates are working. Are students eating more fruits and veggies when offered – as required by law? Recently published research at UVM has preliminarily concluded “no.” Per usual, however, the reality is far more complex.

The complete study, published online by Public Health Reports, and reported on in the Washington Post and elsewhere, basically found that at two Vermont schools, children put 29% more fruits and vegetables on their trays at lunchtime after the federal standards were imposed, but consumed 13% less, and threw away 56% more. The study was based on a new research technique that took digital images of student trays before and after their meal.

So should this one study spell the end of the mandate? Absolutely not. (Happily, the authors would agree.)

The study only highlights what farm to school advocates have known for years: changing student food consumption habits takes more than a pen stroke. School food change happens when students are connected to food at multiple levels: in the classroom, cafeteria, and community – often at local farms.

Talk to Steve Marinelli, Food Service Director at Vermont’s Milton School District. He’s seen lunch participation grow from 38% to 65% since he instituted a comprehensive farm to school program. These kids have fresh fruits and veggies in their classroom and in the lunchroom every day, meeting the new nutrition standards.

The key is that the students are engaged in tasting, growing, cooking, and learning about the food. That’s what we at  VT FEED and National Farm to School know intimately. “Farm to school activities like taste tests and school gardens are the training wheels that help kids learn to try and to like new foods. Programs like Vermont Farm to School are making the National School Lunch Program stronger and more efficient, bringing more students into the lunch line and increasing fruit and vegetable consumption,” says Erin McGuire, National Farm to School Network Policy Director.

And there are other factors at work. How long do students have for lunch? As my daughter will tell you, “NOT LONG ENOUGH!” In one of the UVM study schools, the researcher reported that students had 13 minutes after the lunch line to eat. Whole fruits and veggies often take more time to consume. That’s not going to happen easily in a 13-minute window.

The UVM researchers also mention how presentation matters (it does!). Are fruits served already sliced? Are veggies offered with appetizing dips? Oh, and when do students have recess? If it’s post-lunch, they’re more apt to dump that tray in their hurry to get in some outdoor play (a topic for another day).

The UVM study notwithstanding, signs are promising that with this holistic approach, the nutrition standards can be part of the solution to childhood obesity and health issues.

In fact, this recent study of 12 schools, published in Childhood Obesity concludes precisely the opposite of the UVM study (here’s a simple summary). It found that more children are choosing and eating fruit with their lunches, and consuming more of their entrees and veggies since healthier school meals were introduced in the 2012-2013 school year. More locally, Vermont Community Garden Network estimates there are 250 school gardens in the state right now, getting kids engaged in growing food – and often selling some of it back to the cafeteria.

But of course, there’s work still to do. We all know it takes time to adjust to (not to mention evaluate) new standards. And certainly not every school has a robust farm to school program.

That’s where another act currently before Congress can help. It’s the Farm to School Act of 2015, co-sponsored by U.S. Senator Patrick Leahy of Vermont. The Act would significantly increase grant funding for schools to expand their farm to school activities and extend its availability to preschools – to start building healthy habits from an early age.

Before we judge the 2010 nutrition standards a failure, let’s support the work in farm to school that needs to be done to make it a success.