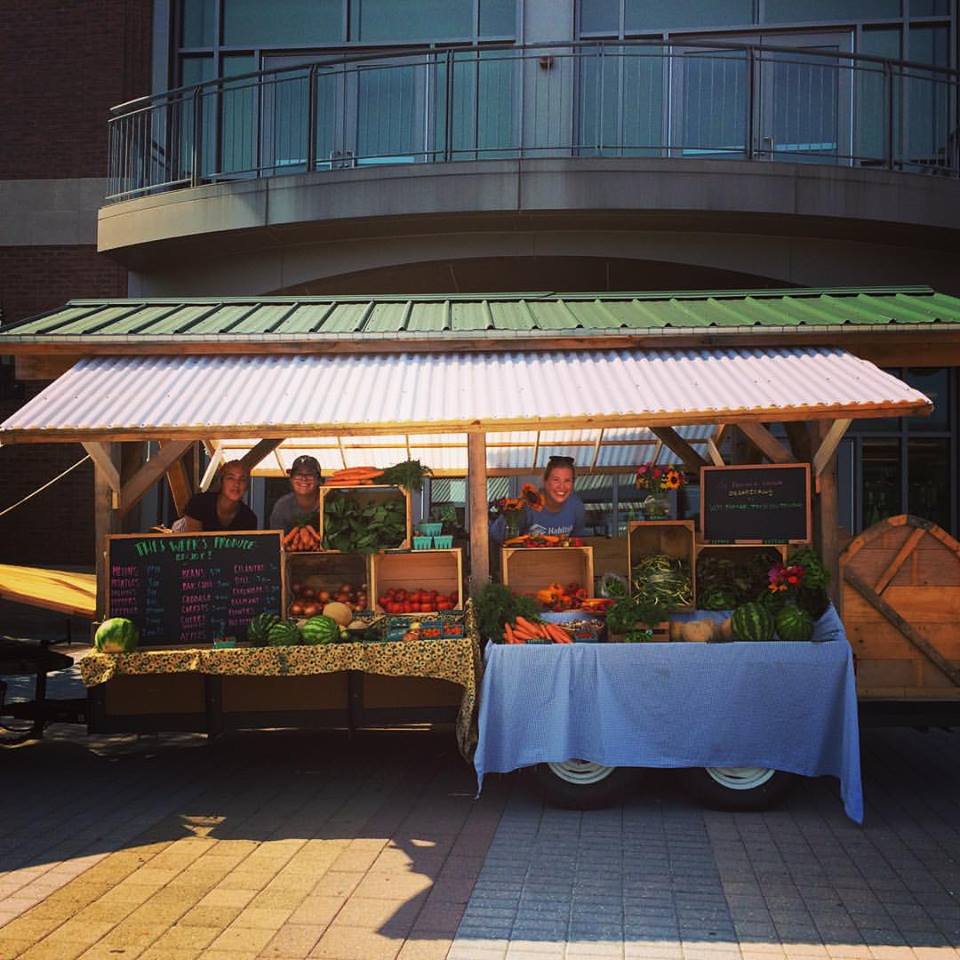 Last Tuesday, students in the UVM Farmer Training Program rolled onto campus with a new mobile farm stand. They parked the stand—an open house-like structure built on top of a trailer—in front of the Davis Center and welcomed students, staff, and faculty to buy fresh produce.

From 2 to 5 p.m., between selling fruits and vegetables, the four students running the stand spent much of their time informing customers of the farm mobile’s construction and setup. Cristin Manner, an FTP student from Burlington who worked at the stand on its opening day, said, “People were really impressed.” She said some customers walked up to the stand with eyes wide and jaws dropped.

“I think the display is awesome. It looks really nice,” said student Katie Kennedy, Wildlife Biology major. Sunshine Jiang, an Early Education major, felt the same and also noted how nice she thought the FTP students were and how excited they were to be selling produce in the new venue.

Regarding what it means to be able to have access to organic, locally grown produce on campus, Kennedy and Jiang were optimistic. Kennedy said, “It’s a privilege that not a lot of students at other colleges have. They don’t know where their food comes from.” Likewise, Jiang felt that having access to local food on campus is “…awesome. We get food that’s fresh. I really enjoy that.”

With the introduction of the new stand, FTP students hope to reach out to more students on campus. Over the summer, FTPers were focused on their customer base of faculty and staff, but new students are new customers and represent new opportunities to get others involved in the changing dynamic of local food systems, specifically on college campuses.

Max McDade, an FTP student from Kentucky, summed up the general feeling of the role farming students play in growing and selling local food on campus. “Every university should…have a program like the Farmer Training Program that allows students to provide the opportunity for fresh, organic produce on their campus,” he said. The FTP students are proud to be at the center of a progressive, local food movement and want to share their passion—and the fruits of their labor— with the rest of the campus community.

Before the mobile farm stand, FTP students used tables and a tent to display and sell produce. All the equipment and food were loaded into a van at Catamount Farm and then brought to campus.

Molly Leebove, farm assistant, was in charge of driving and unloading the van. (Now, she’s responsible for hauling the new stand to and from campus.) She said the difference between the old setup and the new mobile stand is that “[The new stand] feels more official and stable. It feels grand.” Regarding opening day, she mentioned the energy and excitement she had about unveiling the farm mobile: “It was like, here we go, customers! They were stoked.”

Manner echoed Leebove’s enthusiasm, noting that the new setup is nicer and easier than the previous one. “The flow was much better. Everything felt more spacious,” she said. However, it took a little time to get used to. She said she had to “figure out the routine with a new material.” Still, Manner felt positive about the stand: “It seems like this will be a good foundation. It creates a better stage for our food.”

The farm stand is a class project from last year’s Farmer Training Program, designed and constructed with the help of carpenter Jacob Mushlin. The stand was just shy of being finished last season, but there were some loose ends that current students tied up a few weeks ago to prepare it.

Isabella Strong, a student from Georgia who helped finish the construction, expressed what it was like to finalize the project. “It was hot. There were a lot of pieces,” she said. “We had to work through kinks that hadn’t been thought through,” such as figuring out a way to keep the awnings on either side of the stand propped up. In the end, Strong was happy to see the project completed.

The stand’s frame was built using two-by-fours on top of a trailer. There are polycarbonate awnings on either side, which are propped open when students sell the produce. Two wooden shelves on each side fold down to hold goods, and the shelves extend from slightly higher, permanent shelves inside that run the length of the stand. This allows students to create two-tiered vertical displays. The front has a wooden platform that folds down to make room for more displays, and there are gates at the back. The roof is made of corrugated metal.

“It’s like a transformer,” said Andy Lang, an FTP student from Missouri who also helped with the final construction. He spoke of how the stand turns from a closed structure to an open “veggie mobile.”

Summer squash, tomatoes, cucumbers, garlic, onions, eggplants, plums, and peppers were just some of the fruits and vegetables available on Tuesday. Except for the apples, all produce was grown and harvested by the Farmer Training students on the Catamount Educational Farm in South Burlington.

You can see what the farm mobile is all about on Tuesdays, from 2 to 5 p.m., outside the Davis Center, until the end of October. A forewarning: dancing and singing about farming and great organic food might ensue.