A Marine Veteran finds his calling in Organic farming 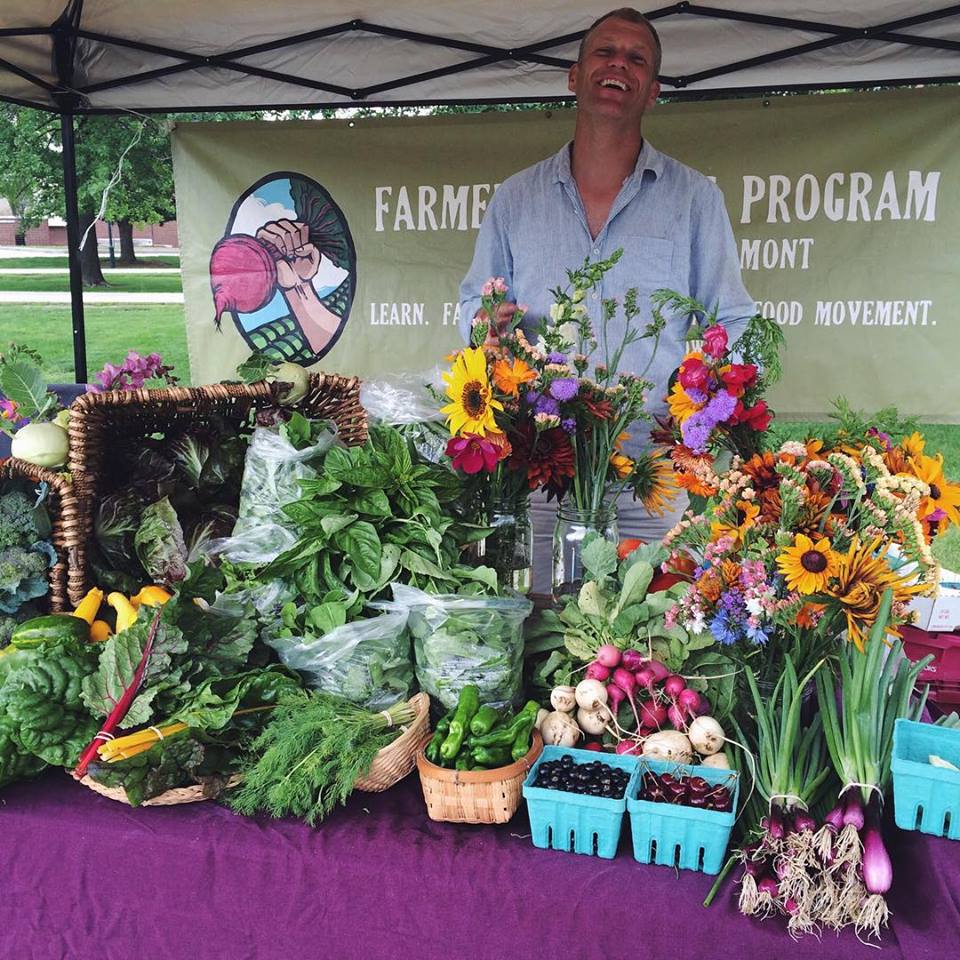 Andy Lang first became aware of the importance of local food while helping his girlfriend build a juice truck in his home state of Missouri.

Getting fresh fruits and vegetables to make watermelon, blueberry, or carrot juice was easy enough in the summer. But in the colder months, finding local produce was nearly impossible, making it challenging for Lang’s girlfriend to run the business.

“I saw how hard it was for her to find fresh organic produce for juices, especially in the winter,” says Lang, 38, now a student in the UVM Farmer Training Program, a six-month program that draws about 25 students per year. “All of this stuff to make juice had to come from outside of the country in the winter, and that just didn’t seem right. Working with her really opened my eyes, and I wanted to do something about it.”

Lang began in May the Farmer Training Program to learn about organic vegetable farming. While he’s had a lifelong interest in home gardening, his path to farming has been anything but linear.

From Missouri to the Marines

In high school, Lang got his first taste of agriculture while working odd jobs on local farms. While his grandfather was an industrial corn farmer in Illinois, Lang never thought much about farming as a career. After graduating from high school in 1995, Lang went to college in Missouri for 18 months to study business administration before deciding it wasn’t for him. Instead, he worked for his family’s restaurant business and then joined the U.S. Marines in 2002.

For four years, Lang served in the Marines and was based in North Carolina in the 2nd light armored reconnaissance battalion, a mobilized armored terrestrial unit. During that time, he spent six months in Djibouti, a small country on the Horn of Africa.

“Djibouti was a combat zone, but nothing like what was happening at that time in Afghanistan or Iraq. Still, the (U.S. Government) wanted an American presence there,” he says.

Lang gained greater awareness of local food and food security during his time overseas. “People would have to walk a great distance and carry jugs just to get water for their families or gardens. It made me very aware of the differences between Africa and the U.S., and an appreciation for all we have at home,” he says.

While his decision to study farming in Vermont came nine years after returning home from the Marines, the seed was planted long before in Lang’s mind.

Learning to be a Welder and Becoming a Farmer

After returning home from his time in the service, Lang worked for Habitat for Humanity to learn carpentry and eventually help his girlfriend build the juice truck for her business.

Shortly before coming to UVM, he received his associate’s degree from Ozarks Technical Community College in Springfield, Mo., where he studied welding. Lang, an avid cyclist, also attended the United Bicycle Institute in Oregon, where he learned to weld bikes. (You might see Lang riding around Burlington on a titanium bike he built.)

His studies at community college and the United Bicycle Institute were paid for by the GI Bill, as is his tuition for the UVM Farmer Training Program, where he’s learning about sustainable agriculture and local food systems.

“There’s been a growing awareness in my life about local food and organic farming. As I’ve learned more about the connection between the food we eat and the way we feel, I’ve become more aware of the harm of pesticides to us and our environment,” he says. “Farming organically is a way to feed ourselves wholesome, healthy food and a way to help repair the soil.”

Lang is weighing his options about what he would like to do after he completes the Farmer Training Program this fall. He wants to continue to explore organic farming as well as keep on welding — two skills that aren’t as different as they might seem.

“The main similarity that I’ve noticed between farming and welding is the importance of being able to be flexible and to be a good problem solver. There is definitely an artistic aspect to both trades as well,” he says. “I think it is beautiful to take a raw piece of metal or a piece of fallow land and begin to shape it into the picture you have in your mind. Projects don’t always turn out the way you expected, but they always allow you to be creative.”

As for learning to farm at UVM, Lang couldn’t be happier with his decision. “The people I’ve met have been the most enjoyable part of this program,” he says. “Their energy and passion to grow food and be a positive part of the changing food system have really inspired me.”