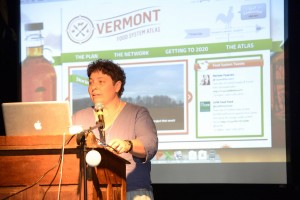 According to Civil Eats—a national online news outlet for critical thought about the American food system—Vermont is America’s food relocalization laboratory. While the food system development work taking place in Vermont is receiving national recognition, the state is not an island. Awareness is growing that we are operating in a regional food system without fixed or solid borders and we are learning how to align our statewide work around a bigger regional initiative.

Released in 2014, A New England Food Vision is an aspirational document which estimates what could be grown, raised or caught in New England in order to produce 50% of our food needs by 2060. This Vision also reflects shared economic, environmental, and social values where the right to food for all is ensured. In early May, Brian Donahue, lead author of the report, spoke at an event hosted by the Vermont Community Foundation’s Food and Farm Initiative about the need to increase farmland under cultivation in New England to 15% from the current 5% in order to support production of 50% of the food for New Englanders. This would equate to expanding to 6 million acres under production (up from 2 million today and still keeping 70% of all land in forests) in order to feed 17 million New Englanders based on the USDA MyPlate recommended diet. This level of acreage would support the production of all of our vegetables, half of our fruits, all of our dairy, beef, and lamb (grass fed), and all pastured pork, poultry, and eggs. Additional protein would come from beans and fisheries. The other 50% would be imported including the majority of the grain we consume (for humans and animals), plus fruits, oils, nuts, coffee, tea, chocolate, and sugar-although in Vermont we can certainly raise the bar for the amount of local maple syrup and honey consumption.

It is the biophysical opportunities and constraints of the six New England states that provide an understanding of what types of food can be produced, raised and caught in the region. They also reveal the physical and ecological assets of our regional land base, the various demographics of the region, and an awareness of our physical infrastructure as we seek to become more food secure and fair as a region.

Here in Vermont, we are focused on implementing our statewide food system plan and the 25 Farm to Plate goals to get us to 2020. We speak about a regional food system because ultimately that is what Vermont will need to really make local food become mainstream here. If we reach Vermont’s goals, we’ll naturally be contributing to the region’s 50×60 aspirations. We are actively working with representatives from the other five New England states who all recognize that collective, long term food security is only possible through the expansion of the regional food system. We actively assist the other five states as they work to develop and complete their own food system planning work and build statewide networks for plan implementation. We believe it’s important for each state to have their own local food system plan and relocalization efforts in order to actually begin to rebuild a sustainable regional food system.

Ellen Kahler is Executive Director of the Vermont Sustainable Jobs Fund, the non-profit organization responsible for coordinating Vermont’s Farm to Plate Network—the self-governing body of over 350-farm and food organizations responsible for collectively implementing the State of Vermont’s food system plan—the Farm to Plate Strategic Plan. Ellen is a member of the Food Solutions New England Network Team—the organization behind a New England Food Vision and is engaged with the regional efforts to begin to develop a roadmap to reach the vision. She is presenting on the biophysical opportunities and constraints to the New England Food Vision at the 2015 UVM Food Systems Summit.