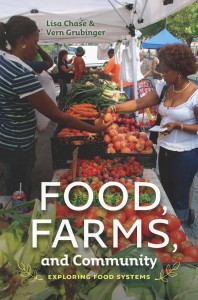 UVM Extension faculty members Lisa Chase and Vern Grubinger recently co-authored Food, Farms, and Community: Exploring Food Systems. In this post, we ask them about the writing experience and what they hope readers will glean from the book.

Lisa Chase will be at Phoenix Books in Burlington this Thursday, February 12, at 6:30 p.m. for a book discussion. The event is free and open to the public.

Food Feed: Why did you feel called to write this book?

Lisa: Vern and I started talking about the idea of this book several years ago. Because our work requires us to travel all over the state, we end up driving a lot, and it was during those drives that we began talking about the importance of sharing the stories behind Vermont’s working landscape. As we got into the writing, we realized the need for a book that looks critically at food systems nationwide. 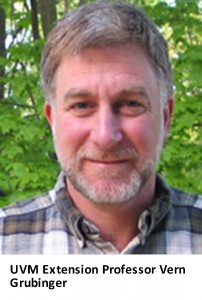 Vern: We wanted to help people dig deeper into things they wouldn’t otherwise be exposed to. Right now, there is so much enthusiasm for local food, and those of us who work in those areas get to see and learn things that others don’t. We wanted to get into the nuances, especially for people who have not had exposure to the topics.

The focus of the book changed over time. It started out as a book celebrating Vermont’s local food successes, but you can’t talk really about local foods without looking at the larger context. Looking at local food more critically helped us realize that there are both good things and some limitations associated with local food. The reality is that most of our food is not coming from the local food system, so it’s important to see the big picture.

Food Feed: During the research and writing process, what did you learn? What did you struggle with?

Vern: It was great fun to dig into the history of the issues, which we wanted to provide to help people understand how we got to where we are today. For example, where did food safety laws come from? I never knew it was Abraham Lincoln who started the U.S. Department of Agriculture, and within that the Bureau of Chemistry, which over time morphed into the Food and Drug Administration. That was the first time government was looking scientifically at the risks of food. Likewise, collecting data led to challenges to some of the notions that we had held. You hear “local food systems save energy.” But when you look at the research, it’s equivocal. It turns out that long-distance transport is actually pretty efficient.

We encountered the same thing with the small farm vs. large farm stereotype.  For the environmental chapter, we interviewed largest dairy farmer in Pennsylvania. His farm has 6,000 cows, and it was great to hear his passion for stewardship. Then, when talking to a small, organically-oriented dairy farm in South Carolina, the farmer said almost the same thing. They are operating very different systems, but here are two people with shared values both trying to do the right thing.

Food Feed: Who is your target audience for this book? 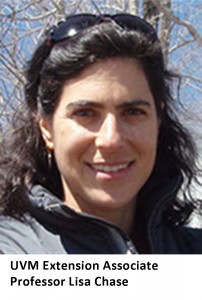 Lisa: Wehave a few different audiences. The book is intended to be useful for college-level food systems classes. In fact, it’s being used this semester at UVM, Montana State University, and a few other places around the country. But we think that others working in food systems, or anyone with broader questions about food, would hopefully be interested in reading it. We tried to write in a way that is accessible to a broader audience.

We wanted to take a critical look at the issues—not just a simplistic message about what’s good and what’s bad. The challenge of that is it makes for a more complicated book to read. We hope readers will come away better informed and better able to make decisions that have a positive impact. Whether we like it or not, we’re all involved participants in our food systems, wittingly or unwittingly.

Food Feed: The book is laid out with early chapters about systems thinking, followed by chapters on various issues in the food system. Why did you choose to set up the book the way you did?

Vern: The thing about systems is they’re composed of subsystems. While it’s important to think in a systems way, it’s not possible to wrap your mind about the entirety of the system. So you need to break it down because each piece is complicated in itself. We picked some topics that are issues of the day and some that are critical issues to the sustainability of the food system. Agritourism, farm to school—these are hot issues in the short term. Farmland protection, energy use, climate change and agriculture —these issues are more critical in the long term. So it’s a bit of mix and match in that regard. Then there are the deeper chapters on what’s underneath, like the business of food, and values in the food system.

Lisa: The order of the table of contents was something we talked about probably more than we should have. Like Vern said, it’s a system—there’s overlap and things are connected in various ways. If we were able to create an interactive version of this book online, our table of contents would look more like a diagram that expresses those interrelations. You’d be able to click on different bubbles and lines and move through the system. However, as a book, we need to present the information in linear chapters. But you don’t necessarily have to read it starting at chapter 1 and going through to the end.

Vern: Back at the 2010 UVM Food Systems Symposium, we had diagrams made into posters showing different perspectives of the food system. That’s when it hit me that it’s valuable to have visual representations of the food system. For example, we include a Centers for Disease Control diagram in which production agriculture is a tiny dot—for them it’s all about the consumer aspects. There’s another diagram that’s all about food production: inputs and outputs on a farm.  It’s like looking at a house; you can look at house from different sides, but you can’t look at all sides at the same time. This is what people are struggling with to understand in terms of systems thinking. We can’t all be generalists. That’s the challenge in academia—the need to be reductionist to some extent, but the need to think beyond our sphere of influence so we make better decisions.

The systems aspect really hit me while working on the farmland preservation issue. There are conservation easements, right to farm laws, zoning rules, tax laws, farm viability initiatives, etc. They all have a positive effect, but when we did the case studies on this topic it was clear  that the most successful efforts are putting all of these strategies together into a comprehensive approach.

Food Feed: You provide many examples from the Vermont experience, as well as from other parts of the country. Did you intentionally seek out stories from other places to show that these changes in the food system aren’t unique to Vermont?

Vern: Our editor prompted us by saying, hey, Vermont is great, but you need to go beyond the borders. For those of us working in Vermont, we also need to push ourselves to find out about great things going on farther afield, and that’s what many of our case studies are intended to do. Of course, some of our case studies from outside Vermont came through indirect connections from Vermont. For example, I met the folks at Sustainable Harvest, a for-profit coffee importer with a social mission, through teaching in the UVM semester abroad class in Oaxaca. If I hadn’t been involved with the semester abroad class, I never would have met them. They’re featured in the chapter on Values.

Food Feed: Can you speak more to the transformational vision your get to in the final chapter?

Vern: So many of the things we react to about the food are short term reactions to symptoms of a deeper problem. The challenge is to redesign parts of the system so we don’t have these problems in the future. In other words, to go beyond adaptation and mitigation to thinking about how to transform something.

One of the core messages we hope the book conveys is that good things happen based on positive relationships among people. When you have anonymity and lack of transparency, that’s when things happen in the food system that don’t align with people’s values. I think the transformation we envision will happen through a combination of systems level thinking and strengthening of social capital.

Lisa: We talked a lot about hitting the balance between recognizing the challenges and problems, but wanting people to feel empowered to promote change. We don’t want the reader to feel overwhelmed and paralyzed. When you read through the stories in the book, most of them are very inspiring—people are dealing with problems, but they’re addressing them in ways that are working for the most part. The only interview that left me depressed was the one with a corn and soybean farmer in Iowa selling to commodity markets. He was doing everything he could to make the farm work, but he felt trapped in the system and couldn’t see a way out. He would say the biggest threat was larger farms, but when I asked him where he sees his farm going in the future, the answer was to get larger.

Compare that with Karl Kupers, a wheat farmer in Washington, who saw a way out. Karl had been trapped in the wheat commodity system, but he realized that it was not a sustainable way to run a farm for the long-term. He pioneered a new approach of selling value-added wheat with the goals of environmental health, social justice, and economic profitability—a win-win all around. The lesson from Karl’s story, and many of the other examples in the book, is that new initiatives can work when you combine innovative ideas with strong relationships and a willingness to take some risk. It doesn’t always work, but when it does, we have the opportunity to make transformative differences for our food systems.