An Interview with Julieta Salazar Robert at Villada in Oaxaca, Mexico

It’s that time of year again when UVM’s Oaxaca Study Abroad program starts and a curious bunch of undergraduates, from many different majors, come together to learn about Mexico’s past and present history, politics, language, culture, art, and best of all for me, its incredible food.

This year, the students’ first four days are in an acclimatization retreat at La Villada Inn about 20 minutes up a steep hill outside of the City of Oaxaca.  A picturesque location with views down the valley and up into the majestic and very high, Sierra Norte Mountains.

Oaxaca is a state in Mexico and its capitol is formally called Oaxaca de Juarez, which is where UVM’s program is based. The city has approximately 100,000 inhabitants and is known for its fine and artisanal art as well as for its beauty, a mile high up in the Sierras.  Far from the troubled border, Oaxaca is a haven of artists and interested foreigners curious about this special place.

Each day, at La Villada, the students and faculty discuss an aspect of Mexico, with a focus on the State of Oaxaca and its 16 indigenous groups that have resided here for 10,000 years.  The place is rife with archeological digs; anthropological field work in local traditions and customs; and food systems research.

Which brings me to why I am writing about our experience in La Villada.

Each day we were treated to three meals and two snacks (a lot when you’re just sitting in a chair all day).  The owner/chef Julieta Salazar Robert and her daughter, also Julieta, along with three other women, prepared the day’s meals.  Traditional Mexican meals go like this – a somewhat hearty breakfast of a combination of tortillas and eggs and salsas.  In this case, we also were treated to the Mexican version of pancakes (hotcakes topped with honey and jam).  At lunch, or comida, the big meal of the day served at around 2:00 pm, we started with light clear broth soup with vegetables, followed with a main course of a chicken or pork in a mole sauce with rice or potatoes and always the requisite fresh tortillas.  The meal concludes with a light fruit dessert.  Dinner, or cena, is usually something lighter, a tlayuda (pizza like crispy tortilla disc topped with tomatoes, cheese, avocado and salsa) or sandwiches.

I have eaten in many Mexican restaurants and although almost all of them are excellent because most Mexican cooks still have intact knowledge about how to prepare food, La Villada, was really exceptional.  The students and I began to anticipate each meal with high expectation. I began sneaking into the kitchen to watch these women cook.  I started asking questions about technique.  At first, they seems surprised that some gringa would be interested but over time, they began sharing their methods.

On the last day, I asked Mama Juileta if I could interview her about her kitchen and she agreed. 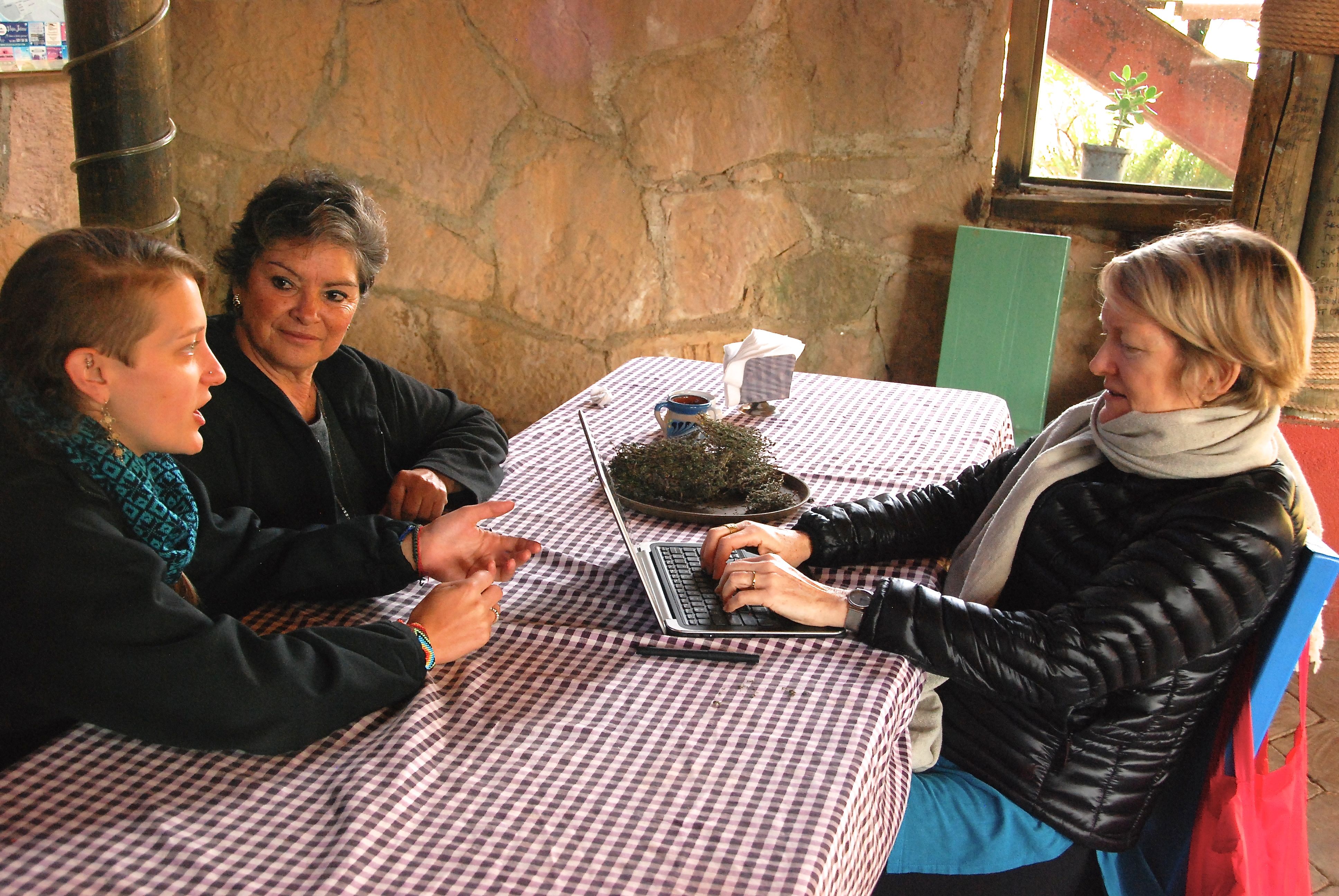 Through my translator, Claire (my Spanish is very elementary), I asked her the following questions:

Q: Juileta, please tell me about yourself.

A: I’m 66 years old.  I have three children and five grandchildren and brothers and sisters who all live either here at the Inn or near me. I was born in Oaxaca and married my husband, who lived down the road growing up and who I was married to for 40 years (he passed 4 years ago).  I have lived in La Villada for thirteen years now.

Q: When did you start cooking?

A: I started cooking at eight years old with my mother who allowed me to make Sopa Caldosa (basically chicken noodle soup).  I grew my skills from there. My mother and her mother, and her mother before, were all very interested in cooking and were known in their villages for their skills.

Q: If you were to say what your favorite dish is to make, what would it be?

*She gave me great detail about her preparation which I was unable to write fast enough but have included a recipe below that I have made with my students in our Oaxacan kitchen here in the city.

Q: How do you decide on the recipes for your Inn?

A: I decide based on who is coming.  If it is a group (which is usually the case since they are not on the beaten path for individuals to find it).  If they are gringos, we usually prepare things that Americans like as they are not usually adventurous eaters. I make American food of hamburgers, sandwiches, spaghetti, maybe some beans and rice but not too spicy.

But, if I get a group like yours that asks for Mexican food, I make the traditional fare of Oaxaca.  Different moles (traditionally seven moles, or sauces), taquitos (fried rolled stuffed tortillas), tortas (basically subs stuffed with Oaxacan cheese, and grilled with meat, avocado, and tomatoes, and salsa), tamale (sweet and savory), and lots of others.

Q: Have you seen changes in your 66 years in ingredients and the way people eat?

A: Ah! Yes! Meat is not as fresh as it used to be.  I used to be able to go to the market and chickens were alive.  The pork and beef was just slaughtered at the local farm.  Now the meat comes in packages from the grocery store from Puebla.  I watch my children and their children not want the food of Oaxaca but would rather eat American pizza, hot dogs, hamburgers, and chips – chatarras!! (junk food).  There is less interest in cooking.  My daughters don’t want to cook, they want to get take-out.  I see serving sizes getting larger! Everyone’s getting fatter!  The young women who cook with me, watch cooking shows and want the food to look fancier – something I never thought about. 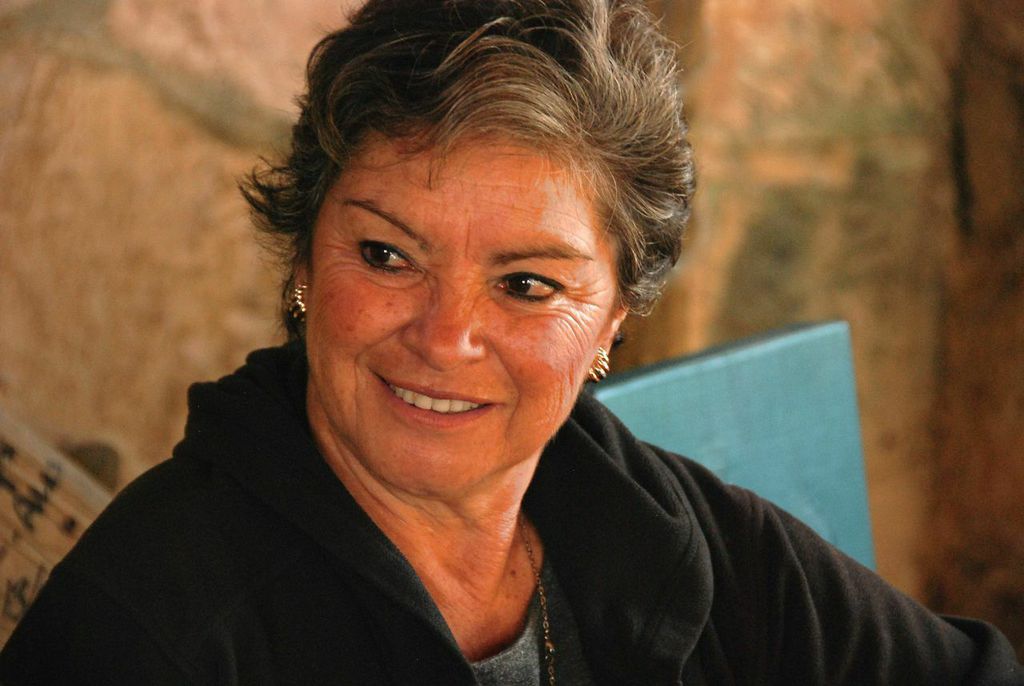 Q: Do people still eat with in the seasons? Or has that been forgotten too?

A: No, we still eat with the seasons.  For example, there are no mangoes right now, and will not be available until March.  We pay careful attention to seasons because we have so much choice here in Oaxaca.

Q: Do you think Oaxaca has the best food in Mexico?

A: Oaxaca is known for its food.  Jalisco and the Yucatan are also known for their food. In DF (Mexico City) they have an annual food competition and Oaxaca almost always wins. But I also see, now that so many people have to go find work in the States, that our cuisine is changing some.  People are bringing back some of the American food like spaghetti which I think is horrible. Yes, Yes, I know it comes from Italy but it is coming here by way of the States and my grandchildren love it – terrible!

Q: I really liked the tortillas you served and noticed that they were not factory made which is hard to find these days.  Where do you get them?

A: This has really changed.  When I lived in the center of the city – the tortillas were made by hand by several little stores around the area.  Now it is all by machine and not with nixtaml (the freshly ground soaked heritage corn method) but Maseca (brand name of industrial grown ground dehydrated corn, that is softer and less tasty).  I was told when they make the Maseca, they grind the cob and everything into it the mix! You can still get the good tortillas but the price has really gone up.  Today the factory tortillas are about 12 pesos ($1.00 USD) a 1 kilo (about 23 in all) and for the handmade tortillas, 12 pesos will buy you about four tortillas.  Since most people who eat at my Inn don’t know the difference – we buy them the factory ones.

It was getting time to go, the van was packed and everyone was taking pictures and saying their goodbyes.  I was closing up but having talked to her for the week and each time noticed that Juileta was missing her right arm.  I asked how this accident had happened.  She told me that when she was 20, on her way to the coast (about 6 hours of harrowing narrow roads), the truck she was in with 30 other young people rolled down the side of an embankment.  Her arm was broken but because she was in such a remote place, it was not tended to, became gangrenous weeks later, and eventually had to be amputated – her right arm and she was right-handed.

She got tears in her eyes as she said that although it was a horrible situation, she was able through the tragedy to find her true love.  She related that at the time of the accident, she had many novios (boyfriends) and after the accident none stayed except for one.  When he came to her hospital bed, he carried a bouquet of roses, looked her in the eye and said, “I love you Juileta, not because you are a tortilla maker”.  She said that although her one hand is extremely sore at this stage in her life (she reminded me that her left has not performed 40 years of work but 80 because it has had to do double duty), she is able to still cook every day, knit (29 scarves this Christmas using her left armpit to hold the other needle), and enjoy her wonderful life.

This recipe has Mediterranean accents like capers and almonds which are typical in much of Oaxaca City cooking.

Directions:
Place the sesame seeds in a heavy medium-sized skillet over medium heat. Toast just until golden brown (about 1 minute), stirring constantly and shaking the pan, immediately scrape out into a small bowl and set aside.

Griddle-roast the tomatillos by placing them on a dry medium-hot griddle surface.  Cook for 10 to 15 minutes turning as they cook.  Place in a bowl and allow to cool, collecting all the juices. Roast the onions and garlic in the same manner.

Season the pork chops with salt and pepper.  In a large Dutch oven, heat the oil over high heat until rippling.  Quickly brown the chops, 2 or 3 at a time allowing about 2 minutes per side. Remove to a platter as they are browned and set aside.  If more fat has accumulated in the pan, pour off all but about 2 tablespoons; set aside.

When the roasted vegetables are cool enough to handle, remove the husks from the tomatillos over a bowl to collect the juices.  Peel the onions and garlic.  Working in batches as necessary, place the vegetables in a blender with the reserved sesame seeds, canela, pepper, cloves, thyme and oregano.  Process to a puree (about one minute on high).

Over medium-high heat, reheat the reserved fat in the Dutch oven until rippling.  Add the pureed sauce and bring to a boil.  Stir in the capers, olives, and almonds.  Return the pork chop to the pan, reduce the heat to low, and cook covered, until the meat is tender, about 15-30 minutes.  Serve over rice.