Breaking Free of our (Food) Chain$ 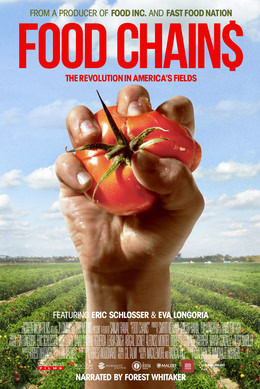 I consider myself lucky to have seen an advance screening of FoodChain$, a documentary from the producers of Fast Food Nation and Food, Inc., while I was at the American Public Health Meetings in New Orleans this past November. There is something energetic, even radical or revolutionary, about being at an artsy venue in an industrial district of a city with like-minded people who want to see and make a difference in the food system, whether from a public health, labor, food security, or other approach.

There was a good “vibe” in the room. When the film began, people paid attention….the whole time. “Chains” is a double, or even triple, entendre in the film. Yes, it is about large food chains (Publix and others) and how the supply chain literally chains workers to a life of poverty.  Specifically, FoodChains$ is about the Coalition of Immokalee Workers’ (CIW) Fair Food Program, and their struggles and successes. But, while the CIW has some victories under its belt, WE as a nation, have a long way to go.

I challenge my friends and colleagues to read passages from Fast Food Nation, or even The Jungle, and the script of FoodChain$ and identify the year the piece was written or filmed. It will be challenging. How can it be that more than a century after the muckrakers exposed the deplorable conditions of workers in the food system, that harassment of workers, rapes in the fields, squalid living conditions, pesticide showers, hazardous working conditions, and slave wages remain the norm? As the documentary highlights, the food industry goes out of its way to hide where our food comes from. After all, shopping wouldn’t be such a pleasure if shoppers really knew about farmworker conditions.

It’s only a penny per pound

CIW has lobbied to have large purchasers of tomatoes pay just one penny more per pound.  This would result, they say, in nearly doubling farmworkers’ yearly incomes. Publix, the largest supermarket chain in Florida and the store with the slogan Where shopping is a pleasure, does not give in. Why? Are they afraid a penny per pound of tomatoes will turn into 2 pennies?  Or, a penny for cucumbers, watermelons, and every other hand harvested vegetable? This is where we move into the transdisciplinary. Why would Publix refuse such a “cheap” way to make the lives of farmworkers better? The question continues decades of debate by economists, sociologists, psychologists, philosophers, and a host of other experts and policy makers to figure that one out. Funny, or sad, that we haven’t figured it out yet in our land of plenty.

The documentary is real, compelling, and a must see. I know that students are planning to screen it in Burlington or on the UVM campus, so keep your eyes out for announcements in the next few months. Some people will cringe, some will make excuses, and some may look away. Regardless of the reaction, FoodChain$ IS a conversation starter. And there is a twist to the film; one that made me uncomfortable. But I won’t reveal the end.