On Tuesday we posted the first in a 2-part series on food waste. This post looks at policy efforts to reduce food waste in Vermont. 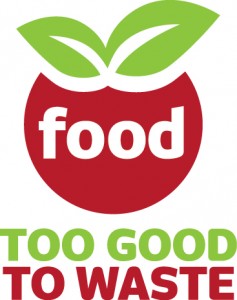 As a teenager I remember opening the fridge as soon as I got home. I’d hover there—door ajar, combing the shelves for something to eat. It was a daily ritual even though I’d almost always resort to one of two staples: cereal or toast… okay maybe both. I never gave a lot of thought to leftovers or what food may be going to waste. At that time I was a walking stomach with little understanding of food other than it meeting my hunger demands.

In many U.S. households there is a new sign in the fridge with the words “EAT ME FIRST.” The U.S. EPA, in partnership with a private consultant and local and state governments has initiated a series of pilot projects to help families reduce food waste and save money through meal planning, smart purchasing, and focusing on foods that perish quickly. Their Food: Too Good To Waste pilot projects have shown measurable savings, household by household, proving that watching what you eat, or don’t eat in this instance, prevents significant amounts of food from going to waste and keeps money in your pocket.

In 2012 Vermont became the first state to completely ban food scraps from landfill disposal through its Universal Recycling law. The law went into effect for the largest generators of food scraps on July 1; the law will phase in for smaller generators over the coming years, with all food scraps (including from households) banned from landfills by 2020.

Connecticut, Massachusetts, and Rhode Island have adopted partial bans that focus on large generators of food scraps (1 ton a week or greater). This is a big move for states, but many cities have been doing this for years. Seattle and San Francisco are the some of most well-known U.S. cities with disposal bans in place. While avid home composters might immediately picture black gold compost heaps in everyone’s backyard, there’s much more to it. 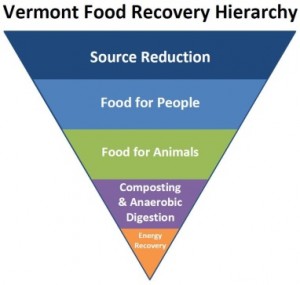 The Universal Recycling law also established the Vermont Food Recovery Hierarchy—a priority list of beneficial uses for unused food and food scraps (the USEPA uses a similar hierarchy but Vermont has adopted its own).  “Source reduction,” the first priority, is simply trying not to waste food, to buy what you need, and to use leftovers. Come to think of it isn’t there a head of lettuce you should be eating?

Next is rescuing quality food for people to eat. The state is collaborating with the Vermont Foodbank to increase awareness of food donation policy and to improve connections between donors and those in need. To encourage this practice the federal Bill Emerson Good Samaritan Food Donation Act of 1996 was adopted to protect donors from liability associated with donated food. The hope is that the Universal Recycling law will increase the amount of quality food going to donation centers around the state.

For years people have fed their leftover food scraps to animals—namely pigs. Over time the laws relating to feeding food scraps to swine have changed to protect animal health. Currently Vermont state law administered by the Agency of Agriculture does not allow pigs to be fed meat scraps or any food scraps that may have come in contact with meat. However, feeding animals such as chickens, which has fewer restrictions, is still a priority for food scraps diversion when it can be done well.

Composting and anaerobic digestion share the fourth level of the hierarchy. Of the two, commercial compost facilities currently process the majority of food scraps in the state. Vermont is benefited by more than a dozen food scrap composters with a permitted facility located in almost every region of the state. The state also has more than a dozen on-farm anaerobic digesters (AD) with the potential to accept food processing residuals and food scraps as the Universal Recycling law goes into effect. Digesters can utilize materials such as animal manure and food scraps to produce renewable energy and their popularity as a method for managing these organics is growing.

According to the USEPA, Americans wasted over 36 million tons of food in 2012 with only five percent composted. The European Parliament just declared 2014 “The European year against Food Waste.” The topic of food waste is getting an increasing amount of attention nationally and globally. Universal Recycling positions Vermont at the forefront of sustainable materials management in a waste averse future.

Josh Kelly is an Environmental Analyst with the Waste Management & Prevention Division of the VT Department of Environmental Conservation (DEC). Bryn Oakleaf of the VT DEC also contributed to this post.