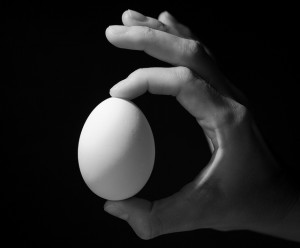 At a dinner party the other day, I was doing my usual uncomfortable mingling and availing myself of the cheese platter, when I bumped into a causal acquaintance, who, for the sake of this blog, I’ll call Joe. We exchanged pleasantries and somehow got on the subject of “local” food. He said he thought the whole thing was just an “elitist stratification mechanism” and that in his opinion, the masses needed more, not less, abundant, cheap food sources. I said that although I agreed that “local” was being usurped by the “locagentsia” and was reinforcing class boundaries, I did not agree. I said local was important for a host of reasons, from the economic advantages to the importance of food sovereignty (as in, keep your food supply close) and he should expand his thinking. I’m not sure how Joe made this transition, but at this point he erupted into a tirade about local/organic vs. conventional eggs.

“Oh, come on, Cynthia,” he said. “Do you buy organic, local eggs? What a rip-off!” He said that those who believe they should pay $4 to $6 a dozen for eggs are not only insane, but have totally bought the hype of this elitist nonsense.  “Give me my $2.60-a-dozen eggs with my bacon,” he said, “and I’m good.”

I stood there for a moment and asked myself whether Joe had a point. His logic appeared to be the prevailing logic in the U.S. that food—something every single person needs to survive—should be cheap.

I know I risk the wrath of all those who believe this dominant sentiment when I say that this concept should be re-examined.  We should pay more for food that is grown in more optimal environments. Yes, I know there are people who can’t afford more expensive food, but let’s just talk about the egg here, not as an example for all food, but for what it is. 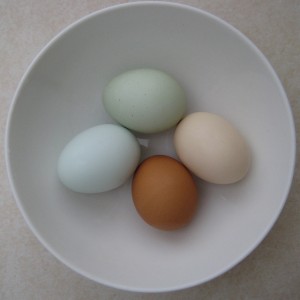 Right now, according to the Bureau of Labor and Statistics, an average egg costs 22 cents—a mindless amount for most people—less than 10 minutes in a parking meter or for a treat in a gumball machine. If you stop to think about it, though, it seems crazy that something as perfect as an egg should be that inconsequential, and here’s why.

The egg is one of those nearly perfect foods. The white of the egg is a pure protein; in fact, all nutritional protein is measured against it. One egg contains 7 grams of high-quality protein (as opposed to most meats, which are accompanied by lots of additional fat), 5 grams of fat, and 1.6 grams of saturated fat, along with iron, vitamins, minerals, and carotenoids. The egg is a powerhouse of disease-fighting nutrients and is only 75 calories. By eating two eggs, an average adult gets close to one-third of their daily protein requirements, not to mention all the other nutritional benefits.  Finally, the egg doesn’t kill the animal. In case you don’t know this, chickens just lay eggs. They don’t need to be pregnant, just the right age, with the right amount of daylight.

But all eggs are not created equal. And this is where Joe needs to pay attention. Local, organic eggs that are raised with the chicken’s health in mind are better for you and the planet.  I won’t go into all the details, but Rodale’s synopsis sums it up well.  Rodale reviews farming practices regarding confinement, antibiotics, arsenic, shell color, and nutritional value, and concludes that smaller farms with organic practices produce better eggs.

One detail Rodale did gloss over is about taste. Varied breeds of chickens that are given diverse diets and allowed to move around (with little antibiotic or nutritional intervention) produce eggs that taste better. These eggs have higher yolks, are less runny, and are more flavorful. If you don’t believe me, do a taste comparison.

Joe was still standing there as I gave him these facts. I know that one’s beliefs about food are layered with many personal positions that are not easily rationalized away. I then posed a simple question to him: “If you’re still not quite sure that a sustainable egg is better, would you consider the economics alone?  Would you pay 40 cents vs. 22 cents for the sheer possibility that it might be a better product, even if you didn’t know for sure? That’s an 18-cent difference for this incredible food.” He paused, then looked at me, smiling, and said, “Yes, I believe I would.”

Then I shared this recipe for Carbonara alla Rigatoni: 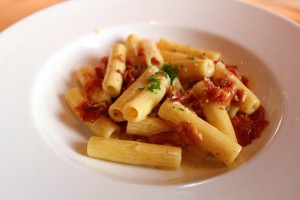