When I moved to Burlington in September 2013, I remember being blown away by the idyllic serenity and beauty of the Vermont landscape. I took a four-day bike ride with my family through the country roads that meandered through the endless rolling hills. Every day, we chose a local farm to stop at for lunch and enjoyed an abundance of fresh, local and organically produced fruits, veggies and dairy products. It was easy to get swept up by the perfection of it all. I had never lived in a place with so much public attention on food! I was experiencing a new sensation of pleasure about food, a connectedness to the origins of what I was eating. No longer was my food anonymous, and this instilled in me a strong sense of place and belonging. I was interested to know the story behind this perfection. Is it really as flawless and utopic as it all seems? Is it possible that Vermont has fully distanced itself from the harmful production, distribution and consumption practices that prevail in the rest of the country?

As I spend more time here, I understand that although many Vermonters are able to experience the wonders of the local and sustainable food systems of this state, many are unable to participate in this lifestyle. What began to open my eyes to this reality was when I realized the importance and scale of dairy production in in this state, accounting for 70 to 80 percent of Vermont’s annual agricultural sales. In my experience living in the southern U.S., whenever there is a large-scale production of anything, there are usually foreign-born workers who do the work no one else wants to do, and for less money. Vermont, however, is one of the whitest states in the nation, and issues of immigrant labor are not as prevalent as in the South. Some things just weren’t adding up. So I searched for ways to better understand the underlying complexities of the dairy industry in Vermont. What I found began to alter my perception of the pastoral Vermont landscape, and the seemingly unblemished food system of this state. 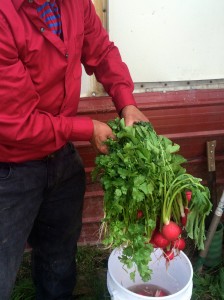 One of the sources that provided me with great insight into the behind-the-scenes of the dairy production industry was Huertas, a project through UVM Extension that supports food sovereignty for immigrant dairy farmworkers.

As many as two-thirds of Vermont’s dairies employ migrant laborers, and at least half of the state’s milk is produced by these workers. Approximately 1500 migrants work year-round in dairy facilities, most of whom are from regions of southern Mexico such as Oaxaca and Chiapas. This population remains somewhat invisible in the public eye however, because they are, for the most part, undocumented immigrants who are here in Vermont with the sole purpose of earning money for their families back home. The irony about this situation is that despite working in the food industry, food insecurity among the migrant farmworker population in the U.S. ranges between 3 and 4 times the current national average. In addition, these workers suffer from isolation; physical isolation from friends and families because of lack of transportation and fear of being deported, and a more metaphorical isolation from their culture and roots.

Not only are the migrant farmworkers isolated from their own people and culture, but we (the general American public living in Vermont) are isolated from them. This lack of exposure to the hardships of migrant farmworkers makes people unaware of these issues. Even the most conscious, locavore or “foodie” may not be aware of the laborers who provide the quality local Vermont dairy products that this state is so famous for. Shouldn’t the people who produce our local dairy, which gives us such pleasure and pride, also feel that same happiness and cultural connection to the food they eat? 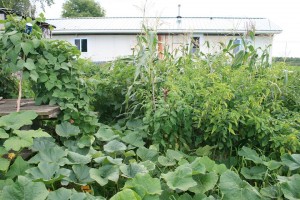 These are the issues that Huertas attempts to tackle. Huertas seeks to “break down these barriers of isolation through organizing food-centered events where families may get to know each other and share in familiar foodways while they are thousands of miles away from home.” Currently 96.3% of these farmworkers rely on someone on the farm to buy their food for them, and lack access to culturally appropriate foods. With the help of Huertas, migrant dairy-farm workers plant gardens that give them a sense of sovereignty and autonomy in an otherwise prison-like environment. The garden is one of the few spaces where they may relax, connect with food practices that remind them of home, and create beauty in their environment.

In order to create a truly healthy food system, a holistic approach that addresses the social, environmental, economic, and dietary elements must be implemented. If you are a Vermonter who cares deeply about a sustainable food system, it is important to think beyond just your own plate. Take time to consider the people who make it possible to maintain the dairy industry of this state, but are deprived of the right to be a part of this healthy food system themselves. You can get involved with projects such as Migrant Justice and Huertas to help create better lives for migrant communities in Vermont.

Contact Teresa Mares at tmares@uvm.edu to get involved with Huertas.

Amalia Smith Hale is a junior in the Ecological Agriculture program at UVM. She wrote this piece for an Environmental Cooking class.

Photos courtesy of the Huertas project.