Meat vs Veg: An energy perspective

What ought we eat? This is among the preeminent questions of our time, one asked by policy wonks, diet gurus, and, of course, consumers. People imbue a wide array of values into their dietary choices, including impacts on their health, cost, and environmental impacts, among others. The question of what to eat generates a particularly generous array of fireworks when it pits plant eaters—vegans and vegetarians—against consumers of animal flesh. I do life cycle energy audits within the agricultural sector and have accumulated enough data to see a fascinating story emerge regarding one particular aspect of food production: its energy intensity. In this essay I’ll present data on the energy intensity of animal- and plant-derived foods, and hopefully contribute to a constructive dialog about what we ought to eat and how we ought to be producing it.

At a national level, data from the United States Department of Agriculture lets us look at the energy intensity of several classes of foods produced in the U.S.1 The ‘production’ phase of these foods includes agriculture, animal husbandry and, for wild-caught fish, harvest. Processing includes butchering animals as well as washing, packaging and more involved food processing techniques. Distribution includes transportation as well as wholesale and retail sales. These categories don’t represent the totality of food energy demand; energy used by restaurants and caterers, within households to store and prepare food, and by water treatment facilities and waste disposal sites, among other categories, are not included. 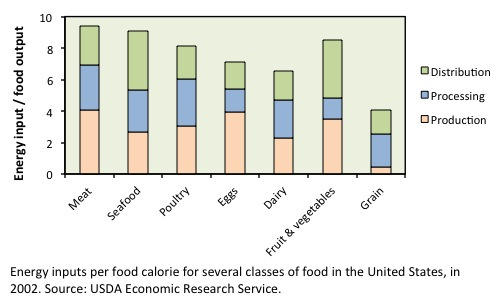 The energy inputs associated with animal-derived foods are high. This shouldn’t surprise anyone; the production of these foods—even seafood—requires machinery, sophisticated processing facilities, industrially-produced feed, refrigerated transportation and copious amounts of fuel. The energy intensity of fruit and vegetables in the US might surprise some, but it shouldn’t; modern fruit and vegetable farming systems are highly industrialized, relying on vast monocultures, fertilizers, pesticides, and tillage practices that require heavy machinery and plenty of fuel. While grain is less energy intensive than other foods, it is relatively devoid of easily absorbed nutrients and provides little more than empty calories. At the national level, there appears to be little meaningful difference between the energy intensity of animal-derived foods relative to fruits and vegetables.

Many people grow disillusioned with the large-scale food production operations represented by the above data, and are more interested in supporting smaller farms that use shorter supply chains. I’ve done life cycle energy audits of several small farms in Vermont, counting both direct energy use—electricity, diesel and other fuels used on the farm – as well as the indirect energy used to manufacture machinery, building materials and other farm inputs2. By looking at both direct and indirect energy I’m able to paint a fairly complete picture of energy use within farming enterprises, although the audits leave out some processing segments as well as higher stages of local food supply chains. In the graphics that follow, fuel refers to diesel, gasoline and electricity, among others, while the energy use associated with vehicles, machinery, buildings and inputs are estimates of their embodied energy. Labor includes both the calories burned by workers on the farm as well as the energy used to transport them to and from work. 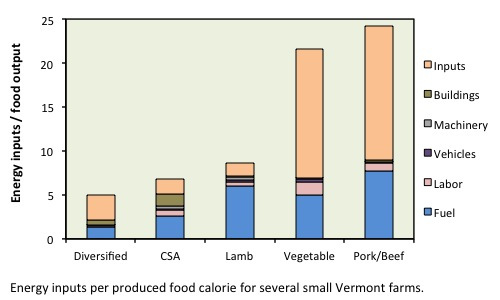 The graphic above shows the energy intensity of several small Vermont farms. The most energy-intensive farm produced just over 16,000 pounds of pork and beef, and the largest share of its energy is the embodied energy in feed grain for the pigs. The vegetable farm grew 55,000 pounds of vegetables during the year of my audit, and most of the energy used on this farm was embodied in the soil amendments needed to maintain soil fertility in the face of heavy tillage. The lamb farm produced just under 13,000 pounds of marketed meat, and the largest share of its energy is from the diesel used to move trailers of sheep from one tract of pasture to another as the proprietors can’t afford a single piece of contiguous land. The vegetable CSA produced 236,000 pounds of produce, and its comparative efficiency is largely due to the fact customers must drive to the farm to pick up their CSA shares so the farm itself doesn’t have to do deliveries. Finally, the diversified farm sold 30,000 pounds of bread, 40,000 pounds of vegetables and 21,000 pounds of pasture-raised beef, pork and milk. The largest share of the farm’s energy use comes as the embodied energy in farm inputs, mainly purchased grain, hay and bedding materials.

These five operations show how radically different the energy input-output ratios of small farms can be. I don’t assume that these farms represent averages for their scales or types, I’m just offering their data to demonstrate that even within small-scale agriculture there’s no clear benefit associated with choosing a plant-based diet over one that includes animal-derived foods. In fact, the diversified farm, growing a mix of plant and animal foods, is the most energy efficient of all the farms listed here. My observation that small, diversified farms seem to be an increasingly popular pursuit among new farmers is telling, and comforting.

Vegetables and fruit are a necessary component of a healthy human diet, contributing calories as well as plant secondary compounds with nutritional and medicinal benefits. Animal foods offer complete protein and necessary fatty acids, at least when raised in a way that affords animals access to a diverse, natural diet. As the debate continues on the role that animal-derived foods can and should play in our food system, I hope that the data I’ve presented here injects clarity into discussions that focus on the energy efficiency of these two classes of foods. Vegetables and fruits are not inherently less energy intensive, and pastured meats are not necessarily more so. I look forwards to gathering additional data on this subject, and making it available to aid others in developing management practices that yield productive and profitable agricultural systems.

This piece was originally posted on Eric’s website HowEricLives.com.