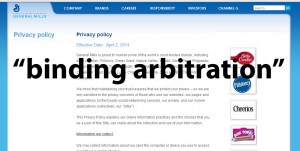 Perhaps General Mills thought it was no big deal when they discreetly slipped the words “binding arbitration” into their website privacy policy page.  The move, however, did not escape Stephanie Strom, a writer for the New York Times, and an astute observer of trends in food policy.  On April 16, 2014, her article “When ‘Liking’ a Brand Online Voids the Right to Sue,” precipitated a flood of public outrage that was so powerful it forced General Mills — only a few days later — to apologize and reverse itself.

When the news first broke it rippled over media outlets faster than you can pour milk into a bowl of Cheerios: if you printed or used a General Mills coupon, you gave up your right to sue. Further, if you took advantage of “benefits, discounts, content, features, services, or other offerings that you receive or have access to by using our websites, joining our sites as a member, joining our online community, subscribing to our email newsletters, downloading or printing a digital coupon, entering a sweepstakes or contest, redeeming a promotional offer, or otherwise participating in any other General Mills offer, you are agreeing to these terms.”

But why the big fuss?  Until the article was published, few people knew what binding arbitration meant. Fewer people still could imagine why a successful, well-established food giant like General Mills felt a need to protect itself from consumers.  The answers can be traced to the story of a single food item: hot coffee.

Binding Arbitration in the Food Industry

In 1994 Stella Liebeck accidentally spilled a cup of McDonald’s coffee into her lap while sitting in a McDonald’s parking lot. The incident quickly acquired mythological proportions when a New Mexico civil jury awarded her $2.86 million in punitive damages (the amount was reduced on appeal to $480,000). A perception arose that the lawsuit was “frivolous,” that coffee was supposed to be hot, that McDonald’s didn’t spill it on her, she did.  Phrases like “Lawsuit lottery” and “Jackpot Justice” and “Junk Lawsuits” popped up in the media (“Spill a cup of coffee, make a million dollars”) and soon after, in government.

The truth was something different.  The 79-year old Stella Liebeck had sustained severe life-threatening third-degree burns on her pelvis and was hospitalized for eight days.  She underwent extensive skin grafting and two years of medical treatment. It came out that McDonald’s had demonstrated a “total disregard” of consumer safety despite a catalog of over 700 injuries recorded at the time of the trial. The “holding temperature” of McDonald’s coffee was lowered by ten degrees.  Despite the severity of her injuries, the McDonald’s case became the poster child for what’s wrong with the jury system. Mrs. Liebeck had become a joke, as well as the jury function, implying that citizens are taking advantage of the legal system.

Big food companies were alarmed about the increasing number of consumers filing class-action lawsuits against them over labeling, ingredients, and claims of health threats. Something had to be done, they argued, to restrict people’s rights to go to court. That something, it turned out, was ‘binding arbitration.’

Binding Arbitration – also known as Mandatory Arbitration – requires you give up your rights to a jury or judge to resolve a dispute. Instead, you agree to the judgment of an arbitrator.  Here are some facts about arbitrators:

Some seek to justify arbitration clauses by maintaining they are “voluntary.”  In fact, this is not the case.  Usually stated in small fonts and submerged in dense paragraphs written in confusing legal jargon, the clause is unfathomable to most people. Further, there is nothing voluntary about the clause: they are mandatory as you must agree to arbitration prior to any dispute.  Since there is a flood of industries inserting arbitration terms into contracts, it leaves the public little choice but to agree to them.

Binding Arbitration is pervasive in the U.S.  Most people, when asked, don’t believe they’ve ever signed a binding arbitration contract. It may come as a surprise that if you have a cell phone, credit cards, or purchased a computer, invested in stocks, had insurance, bought property, saw a doctor, or worked for a large corporation, chances are you’ve agreed to binding arbitration. According to F. Paul Bland, Senior Attorney of Public Justice, “There are several surveys that show that more than 1/3 of the working people in America are bound to forced arbitration clauses.  In fact, far more American workers are governed by mandatory forced arbitration clauses than are members of unions in modern America today.”

Most would agree that frivolous lawsuits are a problem. They can engulf the resources of courts, businesses, and the American public. There are certainly instances where dishonest lawyers and greedy plaintiffs have taken advantage of a legal system that affords plaintiffs great opportunity in demanding their claims.

One problem with binding arbitration is that it’s an inherently biased process. By surgically removing a case from the court system and putting it in the hands of an arbitrator instead of jurors, you’re betting against the house. And the house rarely loses — consumers win less than 10% of the time.  The business of arbitration is just that:  a business.  While an arbitrator might see you only once, they deal with corporate employers frequently, often under contract. The arbitrator wants repeat business.  The overwhelming majority of decisions favor businesses; in the odd case when the arbitrator rules in favor of the citizen, the arbitrator might be blackballed.

Finally, on April 19, General Mills threw in the towel and reversed their policy (We’ve listened – and we’re changing our legal terms back):

“We rarely have disputes with consumers — and arbitration would have simply streamlined how complaints are handled. Many companies do the same, and we felt it would be helpful.

If there are any lessons here, it is that transparency and public awareness of hidden policies that can be stacked against the consumer need to be re-evaluated by the government. Congress must take action to restrict the use of binding clauses.  Most people are interested in accountability, not a big windfall. We want foods that are healthful, safe, and honestly labeled. The jury-system, which is part of the judicial branch of government, is the one branch insulated from influence by large corporate interests. Should the large corporations be permitted to self-police? We need to level the playing field so when you have your day in court you’re winning not just for yourself but for others.