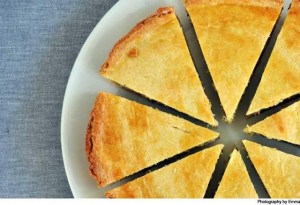 Italian Easter Pie (Torta Pasqualina) is a traditional savory dish from the northern regions of Italy that incorporates eggs, cheese, and spinach in celebration of the return of spring.

In the late 1800s, Vermont’s marble and granite industries attracted Italians to the state, with many coming from the northern Italian region of Lombardy. These immigrants, who settled largely in the Barre and Rutland areas, brought along their cultural and food traditions, which wove their way into the foodways of Vermont.

This recipe comes from King Arthur Flour, the country’s oldest flour company, which is located in Norwich, Vermont. It was published in their 2003 cookbook, The King Arthur Flour Baker’s Companion: The All-Purpose Baking Cookbook, which is available in the University of Vermont Department of Special Collections (call number: TX765 K55 2003).

Making the Crust
Knead together all the ingredients until you’ve made a soft, smooth dough. Place the dough in a lightly greased bowl, cover with plastic wrap, and let it rise at room temperature (65˚ to 75˚F) for 1 to 2 hours, until it’s doubled in bulk. While the dough is rising, prepare the filling.

Making the Filling
Hard-boil and then peel 6 of the eggs. Finely chop and combine the boiled eggs and ham; an old-fashioned meat grinder or food processor works well here. The ham and eggs should be very finely chopped, though you don’t want them turned to mush.

Combine the ham and eggs with the remaining 6 raw eggs, ricotta, and Parmesan. (You may be tempted to just go ahead and use the entire container of ricotta, but don’t; you’ll end up with a filling that’s bland and too copious for the crust.) Add as much parsley as you want (3 to 4 tablespoons is a good amount), and season to taste with salt and coarsely ground black pepper. Go easy on the salt if the ham you’ve used is quite salty; in fact, if it’s very salty, you probably won’t need any additional salt at all, so taste first.

Assembly and Baking
Gently deflate the dough, transfer to a lightly greased work surface, and cut it into four pieces. If you haven’t used dough relaxer, cover the dough and let it rest for 10 minutes, to relax the gluten.

Roll two of the dough pieces into rounds about 12 inches in diameter and place them on lightly greased 12-inch pizza pans, or onto cookie sheets. Spread the filling evenly onto the two bottom crusts, covering the crusts to within an inch of their edges. Roll out the other two pieces of dough and place them over the filled crusts, gently stretching them, if necessary, until the filling is completely covered. Seal the crust edges together, first by pressing the top crust onto the bottom crust all around the edge, then by folding the bottom crust up and over; you want to create a pretty good seal so the filling doesn’t leak out.

Using a sharp knife or pair of scissors, cut a 1-inch round hole in the very center of the top crust; simply pinch up a bit of the crust and cut or snip it off. Make the glaze by whisking together the egg yolk and sugar until the sugar has dissolved. Paint each crust with some of the glaze, using a pastry brush or your fingers to spread it around as evenly as possible. Let the pies rest while you preheat the oven to 350˚F, about 15 minutes.

Bake the pies for about 25 minutes, until they’re a deep golden brown. Remove them from the oven and place them on a rack. You’ll probably see some liquid bubbling in the hole in the crust; siphon off as much of this liquid as you can with a bulb baster, as this step will help keep the pie from getting soggy. Let the pies cool, then serve warm or at room temperature. Refrigerate any leftovers.

Photo via Emma on Our Kitchen – “Italian Easter Pie”