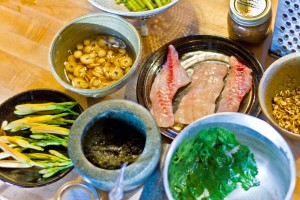 About a decade ago, I was standing on the shore of Penobscot Bay in Maine. It was a typical New England scene: lobster boats headed out to their pots, a harbor seal bobbed in the swell, a herring gull cast a shadow across a tide pool, But just below the surface, an army of European invaders was at work. As I lifted a curtain of rockweed, half a dozen green crabs brandished dark, serrated claws before beating a hasty retreat under the rocks. As the tide receded, thousands of European periwinkles, invasive snails, appeared, feasting on local algae and the eggs of other invertebrates. Above the high-tide line, alien weeds—dandelions, garlic mustard, and burdock, to name a few—lined the roads and spread out across the country.

Why worry about these newcomers?  Invasives—such as green crabs, feral pigs, snakeheads, and zebra mussels—prey on native animals and plants. They eat their food, wreck their homes, and generally cause a nuisance. At the time, I was trying to find out how the green crab had extended its range north to the Canadian Maritimes: by ballast rocks in the nineteenth century or ballast water in the late twentieth?  (It was both as it turned out.) As I flipped over beach cobbles to collect crabs for DNA analysis, I thought perhaps there was something else I could do. So one afternoon I collected a few green crabs and brought them back to my kitchen. Following instructions from Euell Gibbons’ Stalking the Blue-eyed Scallop, I reluctantly snipped off the eyes and removed the lungs, then sautéed them in butter. Fresh from the sea, the delicate flaky meat beat any store-bought crab I’ve had, claws down. I’ve been an invasivore ever since. 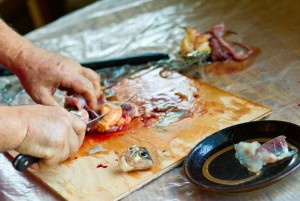 Can eating invaders make a difference?  There are plenty of examples in nature—from wolves to weed-eating moths—where predators help keep their prey in check. And consider the environmental impact of human appetites: Atlantic cod, bison, and Pismo clams have all but disappeared. We managed to dispatch all 5 billion passenger pigeons—many of them smoked, stewed, fried, or baked in pot pies—by 1914. So why not put our destructive streak to good use for a change?  On a recent trip to Cuba, my students and I only saw one lionfish on the reefs.  The consumption of this venous invader is encouraged by the state—the spines have a neurotoxin but the white flesh is quite tasty—and the Cuban appetite for this Pacific native seems to be paying off. But even if our foraging is just compensatory—with weedy species responding with more offspring every time we remove a burdock plant or Asian shore crab—an invasive diet can help take pressure off native species and save a trip to the supermarket. 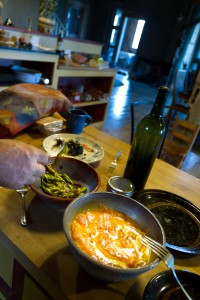 In the United States, invasive species cost about $120 billion a year, including damages and control measures like herbicides and pesticides. Eating them is an earth-friendly alternative embraced by the rapidly growing invasivore movement. I work with chef Bun Lai, of Miya’s Sushi in New Haven, Connecticut, who has an entire invasive species menu that replaces less sustainable foods like shrimp and tuna. His popcorn Asian shore crabs were a fun novelty; the spear-caught lionfish sashimi divine.

Let’s be clear about it, adding invasive species to our plates is not the top solution to this problem. We need strong legislation and stewardship to prevent the transport and spread of nonnative species, and when a new species does arrive, a rapid response is essential (which typically requires more than a knife and fork).

Although it shouldn’t be the first line of defense, eating invasives can help manage the problem and keep us well fed in the process. And remember, unlike most food initiatives, the goal of invasive cuisine is not to create a sustainable market. So don’t be shy about taking seconds. Extinction, at least in the case of invasives, is a happy ending. 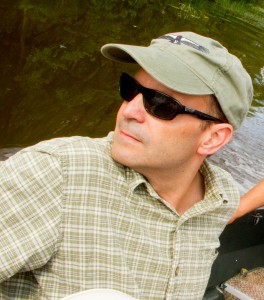 Joe Roman is a Fellow at the Gund Institute for Ecological Economics at UVM. His website EatTheInvaders features a wealth of information on eating invasive species. His work with chef Bun Lai was recently featured in Outside magazine.

The best time to gather young knotweed shoots, up to about 8 inches, is in early spring. (The larger ones are tough and stringy.) Here in Massachusetts, that’s usually the end of April, though this year they were a few weeks early. Collect young Japanese knotweed stalks, up to about 8 inches. They grow like crazy, so you have to be johnny-on-the-spot to get them before they’re too high. Some people peel the outer skin off the shoots, but that can be tedious, and if you’re not careful, you may peel too much off, so I usually don’t bother.

Snip off the pointy tops of the knotweed stalks and mince. Combine flour, dandelions, baking powder, and baking soda in a small bowl.

Cream 0.5 cup butter with 1 cup brown sugar until fluffy. Beat in eggs one at a time and then add the vanilla. To this mix, alternately fold in the sour cream and dry ingredients until blended. Fold in the knotweed pieces. Divide the batter into greased muffin forms.

Note: This recipe can be adapted to use 1/2 rhubarb & 1/2 knotweed and if dandelion petals aren’t available, pull apart red clover flowerheads and use those individual pieces. Feel free to experiment!

RECIPE: Lamb’s Quarters and Beans
Adapted from The Crunchy Chicken and The Vegetarian Times, July 1997

Rinse greens several times to make sure that all sand and grit are removed. Steam greens in a tightly covered pot until wilted. Drain and finely chop.

In a large skillet, heat oil over medium heat. Add garlic and leeks and cook, stirring frequently, until leeks are soft, 2 to 3 minutes. Stir in greens, beans, and chili powder. Cover and cook over low heat for 5 minutes or until heated through.

Season with salt and pepper and serve. Makes 6 servings.