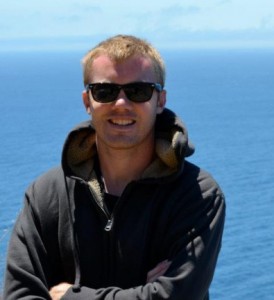 “Breakthrough Leaders Program in food systems at UVM opening enrollment for this summer,” Pollan shared on his Twitter feed. That was all it took. In less than 140 characters, Pollan’s tweet set Manchester on a new career path to food systems and public health.

A Cornell graduate with a degree in economics, Manchester’s heart has always been with food, health, and renewable energy. The Denver resident was aware of Vermont’s commitment to a sustainable food system and its innovative approach to support local food. Even though he had never visited Vermont, reading Pollan’s tweet prompted the 28-year-old to register for UVM’s Breakthrough Leaders in Sustainable Food Systems.

“I chose UVM because I’ve heard so much about Vermont and how food independent it was compared to other places in the country,” said Manchester, who previously worked in fitness education, nutrition, and wellness. “I had heard about the program through Michael Pollan’s tweet and looked into it further. In so many of the readings I’ve done on food systems, Vermont is consistently featured as a model for success.” 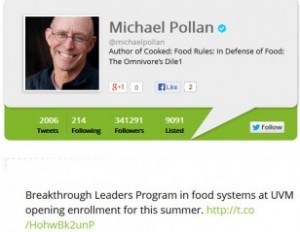 The Power of Food
The Breakthrough Leaders in Food Systems Certificate Program is an online and on-campus disciplinary program addressing problems and opportunities relating to sustainable food systems and leadership.

Manchester said he enjoyed the program’s opportunity to learn with a diverse group of students from a variety of career and educational backgrounds. Taking an in-depth look at Vermont’s food systems, interacting with farmers, and hearing their stories inspired Manchester to make a career change.

Since returning to Denver, Manchester has worked with an organic wholesaler to connect small, sustainable organic farms with commercial markets. “I’ve developed relationships with farmers, done farm tours and visits, and truly feel that UVM’s program has helped set me on a path to change the food system and start drawing parallels between what we learned in Vermont and what I see here on the ground,” he said.

Manchester is now setting his sights on applying to graduate school for a master of public health with a focus on healthy food.

“With the experiences that I’ve had in the last couple years in Denver and through UVM’s program, I’ve decided I can be challenged the most and make the biggest overall impact by going for a public health master’s degree,” he said. “After completing the UVM Breakthrough Leaders program, I kept thinking about the helpful ways to improve the health of a community. I kept asking myself, what’s the best way to solve so many issues that are important to me – mental health, obesity, substance abuse? It always kept coming back to food.”

Inspired by Vermont
While in Vermont, Manchester took notice of the Green Mountain State’s hands-on, educational, and passionate approach to local food. For example, Vermont has the highest number of farmers’ markets and CSAs per capita than any other state. It’s also consistently ranked as one of the healthiest and greenest states in the nation, a fact that doesn’t surprise Manchester in the least.

While he isn’t sure where he will pursue his graduate degree, Manchester said he’ll always remember the sense of community he felt in Vermont.

“In Vermont I experienced something I’ve never felt anywhere else. People in Vermont care about each other, and they care about their land and their neighbors,” he said. “When you are in a place where people care about where they live, their health, and their community, then you have something really special.”