Cream of the Crop: The Cabot Creamery Cooperative 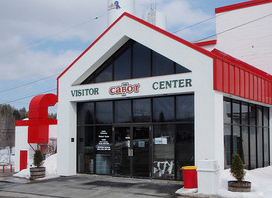 Some farming communities share knowledge, skills, and tools to increase their overall success. Founded in 1919 by nearly 100 farmers, Cabot Creamery, an independent cooperative, became a hub for pooling funds and excess liquid milk, which would be turned into butter and later sold to the public. Cabot Creamery has undergone some changes, like merging with Agri-Mark cooperative (while keeping its original Vermont brand name) and increasing its membership to 1,200 farmers across New York and New England. Dairy farmers often organize in cooperatives because they can jointly and efficiently market their milk far better than they could as individuals. 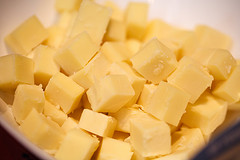 In 2007, there were 155 dairy cooperatives in the nation owned by 49,675 member-producers, which account for 84 percent of the nation’s licensed dairy farms. These farms delivered 152.5 billion pounds of milk, or 83 percent of all milk marketed. Cabot Creamery has been a leader among dairy cooperatives and has taken on the competitive market for value-added products, especially with their award-winning cheddar cheeses, cultured products, and whey by-products. Cheeses made with high quality milk from their member-producers that provide members with premium payments and are especially important for those farmers who depend on the efforts of the cooperative to help them support their livelihoods as milk producers.

Cabot Creamery has self-imposed standards which surpass state and federal regulations. The guidelines created and passed by the members of the cooperative are in place to ensure a safe and highly nutritious product for consumers. Cabot Creamery was the first cheese producing company in the world to offer 50% and 75% reduced fat cheddars. Cabot Creamery is dedicated to helping farmers work towards improving their on-farm practices by launching a first-ever dairy report card, used to measure social, economic and environmental impacts of local farms. Cabot cheeses are produced traditionally, without preservatives or additives, are aged naturally. Cabot offers a broad range of Tablet-K certified and Orthodox Union certified products, and Cabot partners with programs, such as Fuel Up to Play 60 in an effort to address the childhood obesity epidemic.

Cabot Creamery provides cooperative support so its members have the opportunity to continue to farm, especially since family farms are often passed down generation to generation. The land and investments made by those families are important to the members who wish to continue farming, keeping the land preserved and protecting natural resources. Technological advancements and support from the cooperative are vital for environmental protection to continue, because without dairy farms in business, open farmland would be difficult to preserve. The permanent loss of farmland affects not only the productive capacity of the earth’s soils but also many associated agricultural businesses, rural communities and farm families.

Rachel Freund is a senior in the Community Entrepreneurship program at UVM. She wrote this piece as part of an Environmental Cooking course she took in fall 2013.