Fire (blight) alarm! The debate about antibiotic use in apple production 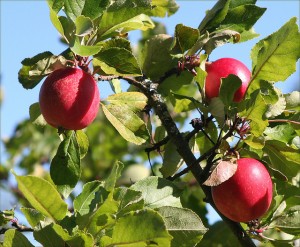 Before the arrival of Columbus, the only variety of apple native to the U.S. was the crabapple. Originally spread around the world via animal droppings, apples were first widely cultivated in orchards by the Romans.  Today, there are about 7,500 varieties grown throughout the world.

Fireblight is a common bacterial disease that can kill the blossom, shoot, or limb of a tree, or sometimes the entire apple tree. The disease is devastating to orchards because it spreads easily from tree to tree, causing huge economic losses for farmers. A method called Integrated Pest Management (IPM), used by 90% of apple farmers in the US, can be put in place, where antibiotics aren’t routinely sprayed, only when disease is detected. A monitoring system managed by Cornell, the Network for Environmental and Weather Applications (NEWA), is a regional pest predictor that warns farmers when there are outbreaks so they know when pesticide use is necessary. It saves apple growers an average $19,500 on sprays and $264,000 in avoided crop loss per year! 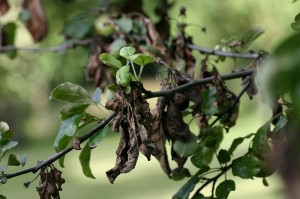 With the use of IPM, the use of pesticides is much lower than conventional farming. The chemicals are safer than other pesticides that could cause chronic and acute diseases for farmers and their families, and they are used less often, so exposure decreases.

What about organic apple production? Only 6 percent of the apple orchards in the US are certified organic. One would think that it means no chemicals whatsoever. However, organic apple production uses Tetracycline, an antibiotic, to treat Fireblight. Consumers have spoken up about antibiotic use on organic apples (they buy organic to avoid chemicals and antibiotics). The National Organic Standards Board has banned the use of antibiotics in organic apple farming starting in October of 2014, but some farmers are upset because they don’t feel like they have enough alternatives to manage pests and would rather lose their organic certification than have to abandon this practice.

That doesn’t mean that organic apple farming is impossible. Michael Phillips, a New Hampshire apple farmer, has developed a system for organic apple growing. He pays very close attention to the trees, the type of soil that they are planted in, and sprays them with herb mixtures to quell pests. Essentially, growing apple trees organically takes a lot of time and caring, which is hard to do on a large scale.

It makes sense that a tree that humans have meddled with so much has trouble growing without a lot of care and attention from humans. Because of our role in the creation of such a beautiful and delicate fruit, it is our responsibility to figure out how to best grow it without damaging the natural environment.

Madeleine Lyman is a sophomore in the Environmental Studies Program at UVM. She wrote this piece for an Environmental Cooking class she took in fall 2013.