A Slice of Culture: The terroir of raw milk cheese 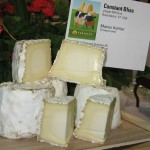 If you are reading this and you live in Vermont, chances are good you’ve heard the hype about raw milk cheese. Maybe you’ve tried Jasper Hill’s raw Bayley Hazen Blue or some Vermont Shepherd. Maybe you’ve even bought yourself some rennet tablets and a cheesemakin’ kit and tried it yourself. Or maybe you don’t have the slightest idea what I’m talking about, so just in case, I’ll explain myself. Raw milk cheese simply refers to cheese made from unpasteurized milk. 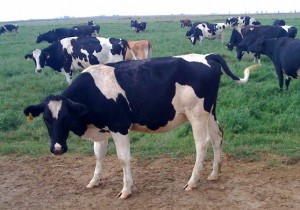 Yes, they do that. ‘They’ being cheesemakers all over the state of Vermont, in pockets around the nation, and in countries all over the world. Raw milk cheesemakers generally run small-scale, pasture-based operations in which they culture and age unheated cow, sheep, or goat’s milk until it becomes yummy cheese: Cloth-bound Cheddar, Camembert, Gryuère, Brie, Berkswell… and the list continues. Cheesemakers who choose to use raw milk instead of pasteurized seek the flavor complexities that raw milk lends to the final product. It is thought that raw milk cheeses convey the intricacies of their region of origin a concept called terroir, which means “taste of place.” To cheesemakers, it means you can taste the grass and herbs that are specific to the region where the milking animals grazed.

Wait just a minute. If it’s unpasteurized, isn’t it dangerous?

Well, possibly. As a living food, raw milk contains both good and, potentially, bad bacteria. Proponents of raw milk believe that if proper sanitation measures are adhered to, raw milk cheese is perfectly safe. A healthy population of beneficial bacteria present in the milk is enough to “fight off” any potential bad bacteria. Additionally, in the United States, there are stringent aging requirements for raw milk cheese (60 day minimum), along with strict facility sanitation regulations. The FDA considers 60 days to be the minimum for ‘safe’ raw milk cheese, which can be sold in stores around the country. Those who oppose the consumption of raw milk cheese are critical of this 60 day rule, arguing that more time is necessary in order for all bad bacteria to die. Many people who eat raw milk cheese feel that it is more nutritious because of the vitamins, minerals, and enzymes that are preserved without pasteurization. Many people who are critical of raw milk cheese claim that the potential for harmful bacteria in the cheese outweighs the health benefits.

So, it is really up to you whether you decide to stick with pasteurized cheese or reach for the raw stuff, as long as you do your homework and feel good about your Gouda! Any way you slice it, you can’t really go wrong with some classic Vermont Cheddar from a happy herd of pastured cows. If you’re looking to try your hand at making cheese, here’s a simple recipe for ricotta, one of the easiest soft cheeses to make:

Makes about 1 generous cup of ricotta

Pour the milk, cream, and salt into a 3-quart saucepan. Attach thermometer. Heat the milk to 190°F, stirring frequently to keep it from scorching. Remove from heat and add the lemon juice, then stir it once or twice, gently. Let the pot sit undisturbed for 5 minutes. 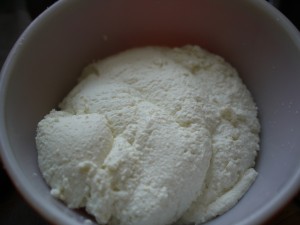 Line a colander with a few layers of cheesecloth and place it over a large bowl. Pour the curds and whey into the colander and let the curds strain for at least an hour. At an hour, you’ll have a tender, spreadable ricotta. At two hours, it will be spreadable but a bit firmer, almost like cream cheese. (It will firm as it cools, so do not judge its final texture by what you have in your cheesecloth.) Discard the whey, or, if you’re one of those crafty people who use it for other things, of course, save it. Eat the ricotta immediately or transfer to an airtight container and refrigerate until ready to use.

Brittany Dooling graduated in December, 2013, from the Environmental Studies Program at UVM. She wrote this piece for an Environmental Cooking class she took in fall 2013.