Behind the Cheese Counter: Cheesemongers’ role in the success & appreciation of Vermont artisan cheese 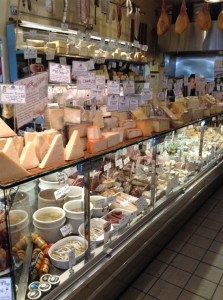 When I first told my family and friends that I was doing my master’s thesis on cheesemongers, I encountered mixed reactions. The cheese lovers in my life were excited—some even jealous—but others were confused. My favorite reaction came from my mother, who asked half-jokingly: “Cheesemonger? Like warmonger?” Actually, the word monger dates back centuries to indicate a dealer or trader in a specific commodity (think fishmonger). While their job title may sound a little archaic, cheesemongers are playing an important role in the artisan cheese renaissance happening around the country and especially in Vermont.

Vermont is a hub for artisan cheese production, boasting a wide variety of high-quality, award-winning cheeses and more artisan cheesemakers per capita than any other U.S. state. Artisan cheese is also an increasingly visible part of Vermont’s flourishing local food movement, with sales coming at farmers’ markets, local co-ops and small general stores, farm-to-table restaurants, and even directly from the farm. But while artisan cheese has become an integral part of Vermont’s farm and food system, the reality is that Vermonters can only eat so much cheese! The continued success of this industry ultimately depends on out-of-state markets, and in these out-of-state markets, retailers rule. My research has focused on how cheesemongers—highly specialized retailers—shape consumer preference for Vermont artisan cheese outside of Vermont. To better understand how this happens on the ground, I worked in a specialty cheese shop outside of Boston for one week this past summer. 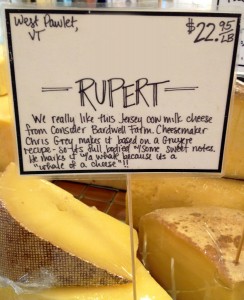 Before I let you in on what I learned behind the cheese counter, it is important to understand that cheesemongers do not just sell cheese; in most cases they also source and promote it. For this reason, they often have very specialized knowledge of where and how the cheese is made, and by whom—all critical to what makes Vermont artisan cheese unique and desirable. As defined by the American Cheese Society, the word artisan implies that a cheese is produced in small batches and “primarily by hand … using as little mechanization as possible.” These qualities of being small-scale and handmade are accompanied by qualities relating to place. The place of Vermont artisan cheese production is not just about geographic location, or the physical and natural landscapes, but also the people, the methods they use, and the values they bring to their work.

Outside of Vermont, and especially in urban areas, the unique social context of artisan cheese production is not always obvious to consumers. Cheesemongers are important because they serve as the link, conveying their specialized knowledge of the cheese, including where and how it’s produced, to consumers.

With that in mind, here are three things you may not have known about cheesemongers and the key role they play in the success and appreciation of Vermont artisan cheese:

2)     Cheesemongers form relationships.
Cheesemongers establish and maintain relationships with both consumers and producers. Their relationships with consumers are marked by a high level of interaction and customer service that, in addition to telling cheese stories, includes providing samples, expertise, and personalized recommendations. With regard to producers, weekly phone conversations to place orders and “talk cheese” (its flavor, age, any variations, etc.) also allow cheesemongers to get to know the cheesemaker and their story on a personal level. In addition, store visits, demos, and industry events allow for face-to-face meetings and interactions. All of this leads to enhanced trust and communication, which are critical when you are dealing with a product that can be so variable, both seasonally and between batches.

3)     Cheesemongers travel for work.
What better way to learn the cheese story than to actually go to the place of production? The cheesemongers I worked with referred to these travels as cheese trips, and Vermont was one of their top destinations. Cheese trips allow cheesemongers to gain firsthand experience of the production context by talking to the producer, seeing the farm and the animals, and watching how cheese is made. They also foster strong relationships with producers. Moreover, cheesemongers occasionally use these trips to transport cheese from the farm to their store, avoiding expensive shipping costs and sometimes even allowing cheesemongers to handpick wheels of cheese, like Cabot Clothbound Cheddar, so that they “always get the wonderful, cheddar-y flavors we love”! 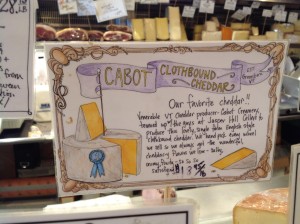 The retail sector is often overlooked in discussions of local food systems, and when it is not overlooked it tends to be painted in a rather unfavorable light. The dominant discourse surrounding food retail is one of concentration and consolidation, of faceless transnational corporations, and of profit-hungry “middlemen” who take a sizable cut from farmers’ paychecks. The cheesemongers I worked with do not fit this stereotype. Moreover, they represent a departure from the traditional capitalist model in which producers, retailers, and consumers are pitted against each other. From what I observed during my brief stint behind the cheese counter, the continued success of Vermont artisan cheese appears to rely not on competition, but on shared knowledge, social values, and cooperative relationships between those who make, sell, and eat cheese.

Rachel DiStefano is a master’s student in the UVM Food Systems Graduate Program.