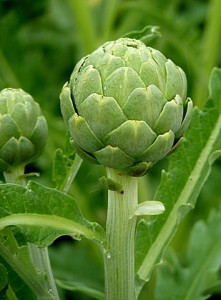 Knock, knock – who’s there? Arti. Arti who? Artichoke. I remember hearing this joke from my brother when he was little. I’m thinking of it now as I’m driving through Castroville, Calif.,  the “artichoke capital of the world” as they like to claim, gazing at miles and miles of thistle-like green just prime for picking.

The globe artichoke is a perennial variety of a species of thistle (in the sunflower family) that is cultivated as a food, and in my opinion, fit for the goddesses. In Vermont, there is an annual called the Imperial Star that grows well and taste great, although smaller. The edible portion of the plant consists of the flower buds and their stems when harvested before the flowers come into bloom. In sunny California, I see acres and acres of these large buds nestled atop their long bristly leaves.

For those of you who have never thought of eating an artichoke – maybe because it looks like a rolled armadillo under attack and too intimidating, or because you’re just too lazy to cook it, peel the myriad leaves, and then dig out the inedible choke (that pale hair-like stuff) in order to get down to the elusive heart – let me tell you what you’ve been missing all your life.

First, artichokes are about discovery.  One’s natural curiosity is piqued when this layered army green orb is placed on your plate because it’s not obvious what to do with it.  You have to watch someone or have it explained to you. But once you start peeling away the leaves, you’re hooked on the journey to get to the center.

Second, an artichoke is a food that prevents you from being one of those mindless eaters.  You just have to pay attention in order to eat it.  Pulling off each leaf – dipping it into a creamy garlic vinaigrette – and scrapping your bottom teeth to pull off the succulent base, one is almost morally obliged to participate in the activity.

Finally, eating an artichoke requires that you sit at a table and slow down.  Because it’s impossible to eat it standing or walking, or, worse yet, while driving. You are forced to stop for a minute, hopefully with friends and family, and just eat. And like my idea of a quilting bee where hands are busy and minds are open, a meandering conversation flows as it moves from topic to topic connected only by inclination.

Now, if I’ve enticed you enough to try to cook and eat one of these global gems, let me explain what you’ll need to do to be successful cooking and eating an artichoke. As you can imagine, there are several good videos out there on how to do both if you need the visual.

HOW TO COOK AN ARTICHOKE: 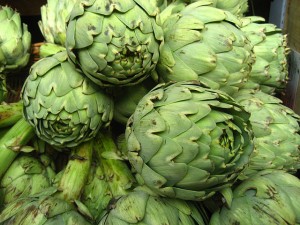 First, you have to know how to pick one out in the grocery store.  They are in season in California right now and their prices are low all over the country (Vermont artichokes were harvested last month).  The artichoke should feel firm when you squeeze it, not squishy. Don’t worry if they have blotches of brown. The brown is from light frosts, which, like other frost tolerant vegetables, makes them sweeter as a result.

When preparing the artichoke, cut off the top third of the plant (use a serrated knife because it’s more like sawing). Cut the stem off enough so that it can “sit” in the bottom of the pot. Fill a pot with ½-inch of water and a couple of wedges of lemon (prevents browning) and place the artichokes (as many as you want but they all have to touch the bottom) leaves pointing down, and cover until the pot boils.  Reduce to a simmer and uncover for 15 minutes more (add more water if it gets too low). 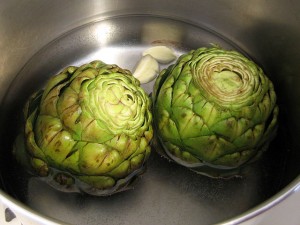 Remove the artichokes and drizzle with olive oil, making sure it drips down into the leaves and heart. Sprinkle with salt.  Add more water to bring the ½-inch depth back and add the artichokes back in, but this time on the cut bottom.  Bring back to a boil, uncovered.  Once it boils, reduce to simmer and cook for another 20 minutes. If the leaves pull off easily – it’s done. If not, simmer for another 5 minutes or so.

HOW TO EAT AN ARTICHOKE:

Eating an artichoke is dramatic and perfect for large groups. Place a large bowl full of them on the table, with an even larger one for the discarded leaves. To eat, peel off a leaf and dip it in garlic aioli, or a light vinaigrette of olive oil, lemon, and parsley, or any other sauce you like. Using your bottom teeth, pull off the sauced inside meaty base. Throw each leaf into the discard bowl and continue on, remembering that as you work into the inner leaves, they should be tender enough to eat whole.

When you get to the choke (that fuzzy stuff I referred to above) scoop it out with a spoon, and be careful not to take ANY of the heart.  Then, slowly and with wonder, pick up the heart and hold it with reverence.  Then either eat it plain, dip it into your sauce first,  or save it for another dish requiring artichoke hearts (or buy them canned or frozen if you can’t resist the one in front of you).