Food for the Soul: Should we be invoking the divine to change the food system? 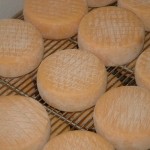 Recently I had the privilege of presenting a seminar, titled “Cheese and God: How Spirituality and Religion Shaped the History of Cheese,” at the UVM Fleming Museum in conjunction with the Museum’s exhibition EAT: The Social Life of Food. At the end of the presentation I posited that the link between spirituality and cheese, which has been in play for at least the past 50 centuries, continues to be alive and well in the 21st century.

Of course, I was referring to the revival of traditional artisan cheese making that has taken America and many other highly developed countries around the globe by storm during the past few decades. The artisan cheese revival in America, as with many elements of alternative agriculture, arose in part out of the counter-culture back-to-the-land movement of the 1960s and early 1970s, which was a time of spiritual soul-searching for many in that movement. Spirituality continues to be a strong thread that connects many of today’s artisan cheesemakers, who seem to encompass the entire landscape of political, social, and cultural viewpoints in this country, from one end of the spectrum to the other, and everything in between. I like to think of the farmstead/artisan cheese movement as the quintessential “big tent”, where the strangest of bedfellows celebrate their common passion together with amazing harmony and amazing results.  (If you are wondering what I’m talking about, just attend the annual meeting of the American Cheese Society next summer and listen and observe…)

In the weeks since that seminar, I’ve been pondering the significance of this intertwining of spirituality and cheese history to our food system today. I can’t help but feel that this is important for the future of our food system. I would argue that spirituality has already contributed to changes in the way that many of us think about our food, our environment, and the unique responsibility that our species has to exercise wise stewardship of this wonderful world that we get to experience as human beings for a brief season.

Although any analysis of spirituality and its impact on the food system is way out of my area of academic expertise, it seems to me that spirituality has already contributed to a growing unity among very diverse peoples who care passionately about the future of our food system. What inspires people to act, if not a profound sense of connection to the earth, other people, or a higher power? If spirituality has indeed already served as a motivating and unifying force within the food system movement during the past few decades, then we would do well not to underestimate its potential to impact the future. It could unleash an unrealized force for changes to the way we produce and consume our food.

Paul Kindstedt is a Professor in the UVM Department of Nutrition and Food Sciences. He also co-directs the Vermont Institute for Artisan Cheese. He is the author of Cheese and Culture: A History of Cheese and its place in Western Civilization.