Species on the Edge (of a Knife): Can bluefin tuna survive the sushi craze? 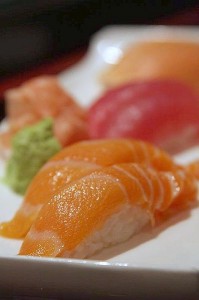 Marguerite Swick is a senior nursing student in the College of Nursing and Health Sciences at the University of Vermont. She wrote this piece for an environmental cooking class she took this past summer at UVM.

Sushi has become all about the rage in cities across the country, but few people seem to notice what is going into it. Or what we should leave out.

In January, 2013, a Bluefin tuna sold for a record $1.76 million at a Tokyo auction. If you’re thinking that Tuna must have been worth it… it wasn’t.

Bluefin tuna have been overfished to the point of almost extinction. Negligent practices have been undertaken due to their rarity, including killing and selling fish that haven’t reached full maturity because the young are found easily in bigger herds.

Want to know a funny thing about the use of tuna in sushi?

Traditional Japanese sushi didn’t even use the tuna we Americans are using for sushi today. Traditional sushi was all about using snapper, flounder, and shellfish delicacies, but  Japanese sushi traditions were lost when they came to America.

So what can we do about the endangerment of this species when we have this massive sushi boom? 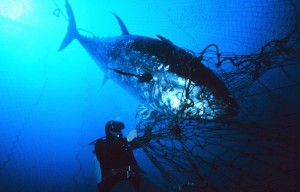 The International Commission for the Conservation of Atlantic Tunas (ICCAT, an inter-governmental fishery organization), is trying to coordinate limitations to make everyone happy, especially the tuna.

Many countries and organizations are talking about placing these tuna under Appendix I CITES listing, basically stating these fish are on their way to extinction and need complete limitations on being caught.

Another way we could solve it all…Let’s start talking to our sushi chefs. Everyone should get back into the old Japanese traditions, Japanese included.