The Greek Yogurt Phenomenon: Whey-ing the reasons and repercussions

Haley Myers wrote this piece for an Environmental Cooking class she took at UVM this summer. 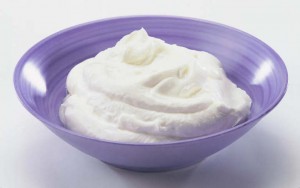 Greek yogurt is a celebrity among supermarket items:  it is popular, it is coveted, and every company wants to use it for marketing, not to mention that it is many a dieter’s idol.  Also, like many celebrities, it is currently at the center of a scandal, its reputation marred by the exposure of a “dirty secret”: acid whey.

Besides resulting in a plethora of articles and blog posts with too many bad “whey”/”weigh”/”way” puns, this issue has raised an important question for Greek yogurt-lovers such as myself:  How does one balance the health and happiness benefits of such a food against its environmental impacts? Though it is possible to make Greek yogurt at home, I must admit that I just don’t see myself being brave and committed enough to do it on a regular basis.  Therefore, I decided to investigate not only the environmental, but also the economic and social impacts of this food that I consume on such a regular basis.  What else did I, and perhaps other avid-but-unenlightened consumers, not know about Greek yogurt?

The first important thing to acknowledge about Greek yogurt is the truly remarkable scope of its growth over the past six-or-so years. In keeping with my earlier metaphor, if Greek yogurt is a supermarket celebrity, then New York state is the L.A. of the Greek yogurt industry: Chobani, Fage, Alpina, and Muller Quaker Dairy all have their factories there, and the governor even hosted the first ever State Yogurt Summit in 2012.  Naturally, this is where economic impacts have been felt most strongly, and they are largely positive.  The state reports that these four companies alone have created 1,476 jobs and $518 million in investments in rural areas, not to mention added security for dairy farmers, who now have a predictable and large demand for their milk (milk used to make yogurt in New York increased from 166 million pounds to 1.7 billion pounds from 2007-2012).    Even better, we consumers can feel warm and fuzzy about supporting these domestic companies because of their local benefits and philanthropic efforts such as Chobani’s “Shepherd’s Gift” foundation.

Of course, this is where many a consumer’s conscience might kick in and cause them to ponder the environmental impacts of all this growth (enter acid whey).  It just so happens that the increased demand for milk is largely necessitated by the fact that it takes three to four times more milk to produce Greek yogurt than it does regular yogurt, due to all that extra straining.  The byproduct is the toxic acid whey, which is causing problems because no one has found a large-scale solution for disposal and the alternative is dumping it into the environment.  As run-off, the whey deoxygenates bodies of water, killing plants and animals.  Though concerning, it’s worth noting that the Greek yogurt industry is less than a decade old, and the fact that this problem is already receiving national attention might give optimists hope that a solution will soon be found.  In fact, some options are already being implemented.  Some companies are selling the byproduct as sweet whey, which can be used in cooking, or disposing of it responsibly with an anaerobic digester.  There’s even a Vermont company making paint out of the toxic byproduct, which both takes care of the disposal issue and prevents the use of other, less ecological construction materials.

If one can see past the whey-dominated media coverage, there are the environmental impacts of packaging and transportation to consider as well.  Stonyfield did a life cycle assessment of their yogurt packaging and production methods, taking a close look at energy costs and waste and concluded that the most important thing in the consumer’s control is the size of container he or she buys. To reduce waste, stick to the 32-oz. containers rather than individual 2-8 oz. portions; this can reduce life cycle energy use by up to 15% and life cycle waste by up to 27% compared to the 6-oz. containers.

Taking the environmental repercussions into account, it’s fascinating to consider why people are so crazy about Greek yogurt in the first place.  Ubiquitous popular health and fashion new sources constantly tout its health benefits, supposed weight-loss magic, and “indulgent” taste.  One detailed study by UBS Investment found that the driving purchasing demographic is upper-income, highly educated women, and that people ranked their top reasons for eating Greek yogurt as nutritional (more protein, less fat and calories, etc.) and that it is more filling, preventing them from eating something else that is less healthy.  Taste and enjoyment were ranked as one of the lowest reasons.  It seems that our fixation on nutritionalism (what exactly might be in our food rather than the holistic experience of eating it) might be the driving, intangible force behind the Greek yogurt mania.

In the past month, a pilot plan by the USDA  to introduce Greek yogurt into school lunches has been made public.  It’s a move that may take a young, yet un-time-tested phenomenon fueled by gentrified, middle-aged women and turn it into a staple of the youngest generation’s diet.  Will this generation also be the one to find a solution to the acid whey problem?  Will they be equipped to contend with our industrialized food culture and all the health, environmental, and social issues that getting one’s food from a far-away factory entails?

I can’t control what this generation will and won’t do in regard to Greek yogurt, or anything else for that matter, but I can try to set a good example for them in my personal practices.  When it comes down to it, I love Greek yogurt for its taste and health benefits.  As a vegetarian, I particularly appreciate it as an easy source of protein.  But, if we are really coming down to it, could I get that protein from other sources?  Absolutely.  Do I need to have my Chobani or Fage yogurt, which is leaving behind a trail of acid whey and carbon emissions and water pollutants and packaging on its way from a factory in New York to me in Missouri, everyday?  Absolutely not.  But does that mean I’m going to quit buying it right now, forever, no exceptions?  Also absolutely not.  What it does mean is that I can start to be more conscious of buying it in moderation, and when I do, buying only 32-oz. containers.  It means I can look to see whether there is any locally-made yogurt accessible to me, or perhaps (heaven forbid) work up the courage to try making my own.  It means that I can research the yogurt brands on which I feel I depend so heavily and try to discover which ones have the most environmentally friendly practices (Stonyfield is the winner so far).  If the yogurt-eating community and I collectively take these relatively small steps, maybe we can lessen our impact and raise responsible future yogurt-eaters. As my fellow yogurt-bloggers would say, where there’s a will, there’s a whey.