What’s in Your Wiener? An Investigation of the American Hot Dog 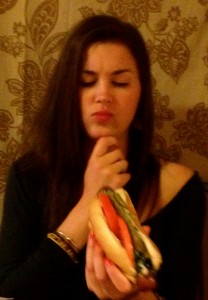 Julia Lloyd is a senior in the Environmental Studies Program in the College of Arts and Sciences at UVM. She wrote this piece for an Environmental Cooking class she took this summer at UVM.

What would a summertime BBQ be without a few dogs on the grill? Well, for one thing, it would be more eco-friendly.

Livestock production releases greenhouse gasses and other toxins into the atmosphere and contaminates water supplies. Therefore, the good environmentalist chooses veggies over meat, and or at least not anything that isn’t grass-fed, organic, and free-range.

But we know many people still eat them, which leads to my big question: what mystery meat is actually in a hot dog? 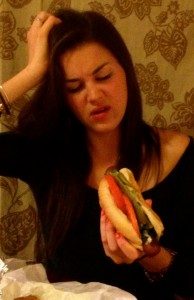 I turns out that most mass-produced hot dogs are made from “trim,” the excess meat of beef, pork, and chicken that the butcher does not directly sell. In addition, artificial flavors, corn syrup, and curing agents compose the processed franks. Although using the trimmings of meats may sound environmentally and economically conservative, the process of raising the livestock and grilling the meat can have negative environmental effects. In fact, a new study from the Air Quality Research Center at UC Davis shows that grilling is responsible for toxic air pollution.

So hot dogs may not be the greenest edible that you can order at the ball game. But are they worth eating for nutritional reasons? 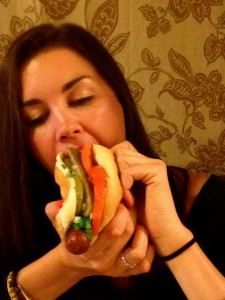 Most studies say no. Hot dogs, while high in protein and iron, are also very high in sodium and saturated fat. A high-sodium diet may put you at an increased risk of stroke, kidney problems and high blood pressure. Saturated fat can be linked to heart disease and type-two diabetes. If this info isn’t enough of a doggie downer, recent studies conducted by the Physicians Committee for Responsible Medicine have linked processed meats to colorectal cancer. This is due to the nitrites present in hot dogs, which are used as preservatives. During the cooking process, nitrites combine with amines naturally present in meat to form carcinogenic N-nitroso compounds. Yikes.

While their nostalgic taste might be worth it to some people to risk the health concerns, it’s probably best to eat hot dogs, like most processed foods, in moderation.