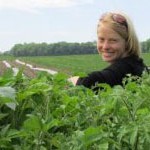 Petra Page-Mann, a life-long seed saver native to the Finger Lakes of New York State, has spent the last decade traveling the globe, soaking in the wisdom of small scale, ecological agriculture. Petra and her partner, Matthew Goldfarb, recently started a certified organic, regionally adapted seed company, Fruition Seeds, which provides seed grown in and for the Northeast. We asked her to share her perspective on the global seed situation and her motivations for becoming a small-scale seed farmer.

There is so much in a seed.

Each seed tells the story of its entire history of its species, millions of years in the making. A few seeds, in a single generation, may travel the globe. Most will stay within their watershed, and, most likely, their microclimate. The successes of each season become encoded in the genetic diversity of each seed. In this way, over successive generations, each species becomes profoundly adapted to place.

Agricultural seed tells an additional story, one of human relationship. Historically, agricultural crops remained fairly static, slowly adapting to place and becoming spread wide first on our backs, then by camel, then by boat. Fast forward to 2013: most seed companies offer seed from all over the world.

If ‘regional seed’ means seed adapted to a bioregion, then all seed before World War I was regional. Farmers in around the world saved their own seed from year to year. Integral to livelihood, maintaining good seedstock was equally as important as keeping a good bull for maintaining strong cattle genetics. Over time, each crop variety was selected to meet the environmental conditions and farmers’ needs unique to each place. 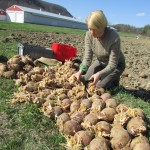 In stark contrast to the long-held tradition of saving seed from one year to the next, seed has become just another input (like fertilizer and pesticide) that most farms purchase annually. Seeds are now developed in places dissimilar to where they are grown, and hybrid seed does not grow true (produce a plant like its parent) when seed from the parent plant is saved. In the case of seeds that are genetically patented by corporations, you can’t even plan the seed if you wanted to because there are legal restrictions on planting the seeds of plants grown from patented seed. 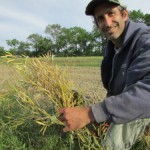 We share a blind faith that seed is produced by the companies selling them; this is most often not the case. Most seed is grown where the climate favors commercial dry seed production, such as the Pacific Northwest and Israel. Much of this seed is adapted to modern agricultural techniques (mechanization and the use of external inputs such as pesticides and chemical fertilizers), allowing for widespread adoption and the high yields resulting from high inputs. Further, breeding for resistance to pests and disease is rarely prioritized, relying heavily instead on chemical applications.

As seeds increasingly come under the control of large companies, there is an associated loss in agricultural biodiversity, as a limited number of varieties are reproduced across the agricultural landscape. This lack of regional adaptation and resilience leaves these crops ever more vulnerable to pest and disease, meaning that farmers must increasingly rely on pesticides to protect harvests, and a single disease could wipe out significant areas planted in the same variety.

Each region has specific resources, growing challenges, and market opportunities; regional seed is uniquely able to adapt to all of these needs and conditions. 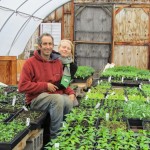 “Seed customized to our growing conditions gives us freedom from ‘making do’ with what serves major national markets,” observes Dr. Michael Mazourek with Plant Breeding and Genetics at Cornell University. “A region’s ability to have vibrant, productive seed is critical.”

Regional seed, like local food, is too important to our lives to be fringe for long.