Sheble-Hall: A Right to Know what’s in Our Food

Timothy Gillis Sheble-Hall is a senior at the University of Vermont who is studying food systems. He grew up on a sheep farm in Dover, Mass.

Labeling GMOs is a policy rooted in power. The passage of such a policy would transfer power from wealthy corporations towards consumers. Consumers want to know what’s in their food, it is a basic right. Over fifty countries, including members of the European Union, Japan, and China, have already instituted a labeling policy. In contrast, we haven’t even had a decent debate in America. Patent law provides a huge obstacle to research, and discussion is hushed around the topic.

Polls have shown that over 90% of Americans want food made with GMO ingredients labeled. Given this statistic, does it not seem logical that this policy would come to fruition through basic democratic process? Unfortunately, a disproportionate amount of the power in the decision-making process has been held by the opposition. Proposition 37, a measure in California’s November elections that would have mandated the labeling of food made with GMO ingredients, lost by six percentage points. The opposition to the bill spent $45 million dollars, as opposed to the proponents’ $6.7 million. In Vermont, a labeling bill has already been voted on in the House agricultural committee with strong support as it heads to the house floor. Guess what folks? We can win this thing.

Vermont certainly does not have the financial resources to outspend the wealthy opposition to GMO labeling, but we do have something they don’t: people power. Through grass roots organizing, Vermont has continually led the nation in change for the better. I think of power as the ability to make something happen that otherwise wouldn’t have without your influence. When Vermonters come together and use our collective voice, we yield tremendous power. 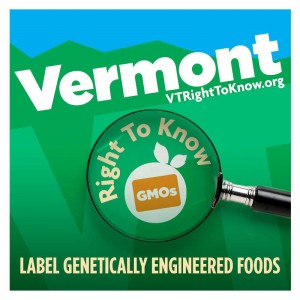 VT Right to Know GMOs is a coalition of organizations (Rural Vermont, NOFA-VT, VPIRG) that are organizing Vermonters who want to take action to support the bill to label GMOs. Recently, forums were held around the state in order to bring folks together to talk about the bill, and how to take action. If you want to see Vermont lead the nation in labeling GMOs, here are some ways to get involved:

Let’s come together for the right to know what’s in our food.