Linda Phillips coordinates a Harvest of the Month Farm to School Cafeteria Program in upstate New York for 4500 students. 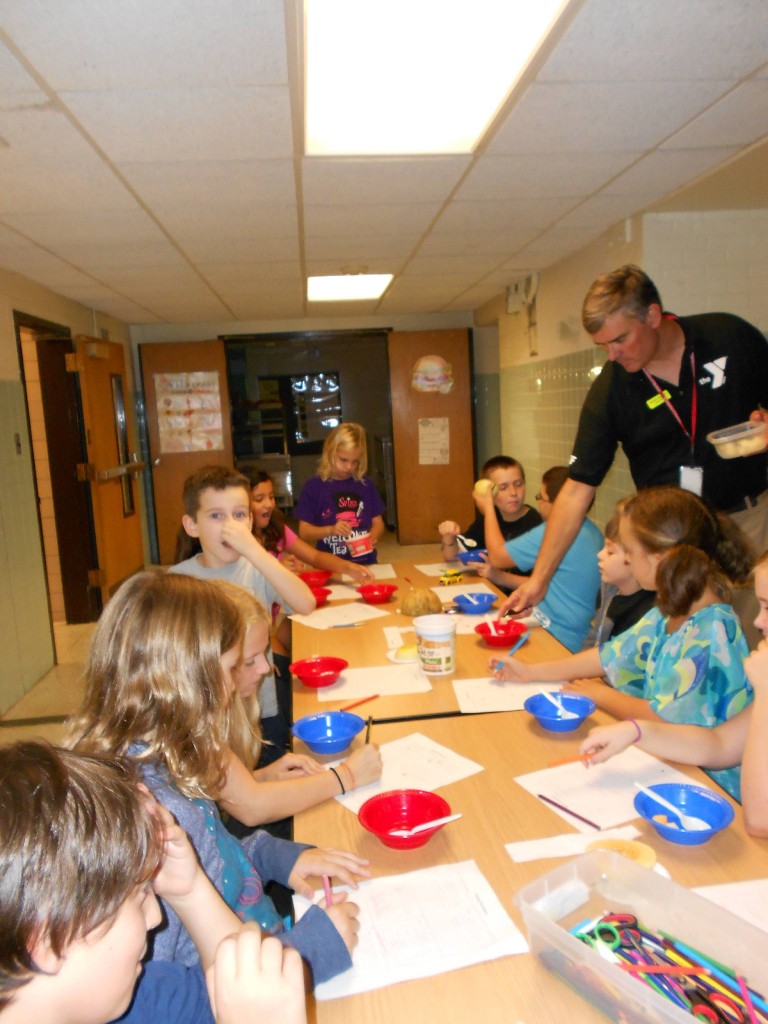 As the Jewish year 5773 begins, I find myself with 30 young people enrolled in the YMCA afterschool care program at my neighborhood school.  Last year, when I didn’t get much interest from teachers or district curriculum folks about hands-on classroom food education, I decided to pursue food education in an afterschool format.

For some reason, I am terrified of leading a large group of young people.  Despite the great support of Giglia Kolouch’s Slow Food Denver Sensory Education curriculum, our first activity – identifying the five tastes — is not at all what I was expecting.  Amazingly, I leave undaunted by the prevalence of YUCK and the failure of each of the four group leaders to meaningfully engage young people in tasting liquid samples of sweet, salt, sour (lemon), bitter (strong green tea), and Umami (Accent in the curriculum, tomatoes or rehydrated mushrooms at the advice of chefs or in our case Kombu seaweed juice based on internet research.).  I don’t find out till later that the program leader didn’t prep participants (or staff) in advance about the start of our Wednesday Cooking Club.

From my class preparation, I learn that using Umami can reduce the need for salt, and since I don’t eat tomatoes and other nightshades, perhaps I should experiment with substituting mushrooms or seaweed in all those soup and stew recipes I avoid because they call for tomatoes.  From the students, I learn their favorite taste is sour.  The salt, made as directed, is too salty for them. I guess most haven’t been to a Passover Sedar.  The sweet, made with more sugar than directed because I was afraid cane sugar would not dissolve so I used confectionary sugar, was not sweet enough.  I also encountered some students who can’t taste the bitter and think it is plain water, even though it is dark.

We decided to break the group into two by age with myself and a YMCA program staff person each consecutively leading small groups of K-2 and 3-5 graders.  The mild weather held, and we were able to sample 3 to 4 varieties of local cucumbers, melons, tomatoes, salad greens, pears, and apples.  This part of the curriculum gave me a chance to learn a little bit about group management, pacing, timing etc. and gave the students a chance to see that food preferences vary—in all cases there was no clear favorite variety.

Another time, or in a setting allowing fewer classes, I would try starting with the progressive tasting.   We did it with cucumbers, but I would also be interested to let them manipulate taste by adding sour, salt, and sugar to tomatoes or pears or zucchini, since the post-assessment indicated many students are not familiar with zucchini.

Cooking from equations like Salad Dressing= sour + salty + a little sweet + fat and experimenting with balancing tastes and textures in salad dressing as well as salsa, pesto, and yogurt parfaits was great.  Again students liked the sour flavor of fresh lemons and limes, though not the strong smells of rice or cider vinegar.  The 3rd to 5th graders were bold enough to try sesame oil in their salad dressing, and after their success creating balanced and tasty salad dressings, the K to 2nd graders put ginger in their salsa.

In the end, students reported learning how to balance flavors, that trying new foods can be good,  and that mixing food is fun and can sometimes turn a yuck food into a yum food.