What are Genetically Modified Organisms (GMOs)? 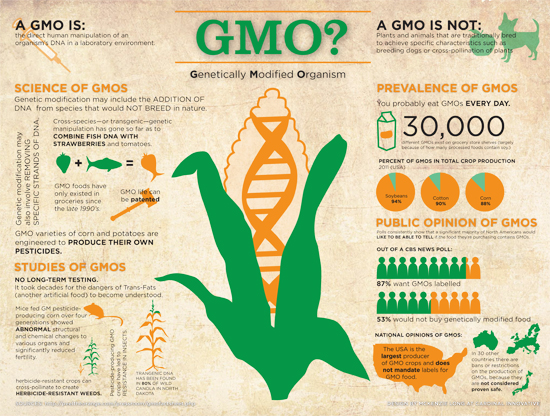 Part of our series of student blog posts. This post comes from Amy Lipsitz, a 2012 graduate of the University of Vermont. Amy was in the course Strategic Writing for Public Communications, part of UVM’s Community Development and Applied Economics Program. 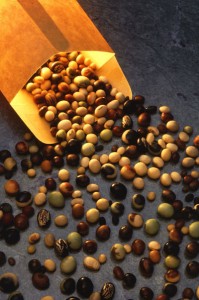 GMOs are genetically engineered organisms with DNA structures that have been changed by adding genes from another living organism. Crops can be genetically modified to resist insects, herbicides and disease or to contain extra nutrients, vaccines or genes that affect the appearance of the crop, for example this soy that can resist very toxic herbicides or the potential of this apple that will never brown. Animals can be genetically modified to produce lower-fat meat, resist diseases, or even create less waste. With resilience abilities and shorter growing periods, GMOs in foods allow them to be grown in larger quantities.

Genetic modification began with scientific discoveries in the early 1950s through the 1970s right around the time of the baby boom. Due to the rapid population growth the US was experiencing there was a need for more food. Thus the Green Revolution was born, a time when herbicides, pesticides and GMOs were created to kill weeds and pests and insure heightened food production for the masses.

Because genetic engineering is a fairly new process the long-term consequences have not yet been discovered and likely won’t be identified for years. Many consumers believe that GMOs are a rare occurrence in our food system but they are actually quite common in the United States. Any non-organic product that contains corn or soy (see list of all GMO crops here) most likely contains GMOs.

There is a small grassroots effort called the ‘Non-GMO Project’ committed to preserving and building sources of non-GMO products, educating consumers, and providing verified non-GMO choices. The Non-GMO Project is the first to offer ‘GMO Labeling’ on products in the United States although GMO labeling is required in most other developed countries. In the recent election Proposition 37, an initiative for mandatory labeling of Genetically Engineered Foods, was up for vote in California. Fifty three percent of California voters chose to reject Proposition 37, if passed it would have:

For further reading, see links below: