You know those 1950’s refrigerator commercials? The iconic 50’s mother (well, probably a mom. It depends on the ad’s target audience) showing off her perfect new Frigidaire refrigerator to her husband. If you have no idea what I’m talking about, take a glance at the example below. 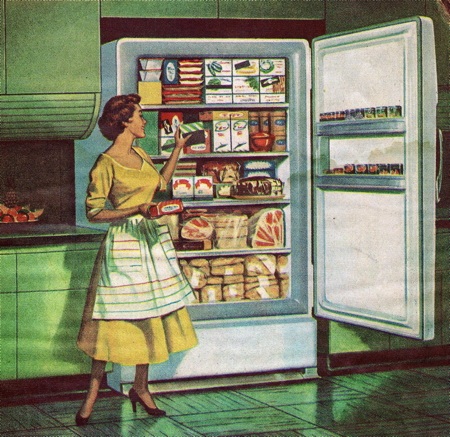 See what I mean?

While this type of commercial is not typical in this day and age, it is an illustration of how women have been connected to the kitchen, food, and the feeding of others since, well, forever. Believe me — I may have given you a 50’s example, but these connections go much further back than that.

But why should you believe me? How much further you might ask? And why women specifically? Aren’t most men grilling and cooking and “chefing” and all that today?

Once you start asking these types of questions, you might move further and ponder whether or not cooking is a “woman’s” task today and if it really is in decline, both serious contemplations of modern media.

University of Vermont faculty are just as curious, and they plan to investigate.

This semester, a group of faculty from all over campus has decided to create a collaborative project on gender, class, and food work. Felicia Kornbluh, professor of history and the director of Women and Gender Studies at UVM, reached out to University faculty early in the Fall 2012 to see if there was any interest in women and food issues. The response she got was impressive. So far, more than 20 faculty have expressed interest.

And what interests they have! Sitting at one meeting is like sitting at a five-star potluck of ideas and creative passion. There’s interest in female obesity patterns, female rhetoric in back-to-the-land movements, and the impact of immigration on an individual’s eating patterns. Phew — and that’s just the tip of the iceberg (lettuce … yuk yuk).

Kornbluh opened the group’s most recent meeting with her own new discovery. “I’ve gotten interested in the black Civil Rights movement, and … how the breakfast programs were first tools of the Black Nationalist movement,” she said. “[But] all I’ve found [during my early research] is work on restaurants that became free spaces. Collard greens as a part of the Civil Rights movement is something that I had never considered.”

Amy Trubek, a professor of Nutrition and Food Science and the Director of the new Food Systems Master’s program, smiled at this statement. Much of Trubek’s work focuses on the significance of the food itself in addition to the social and political implications. “I always look at cooking, at food, at the sensory experience [in her research],” she said.

Trubek herself is looking for partners to help contribute to her research on the so-called, she says, decline of cooking as women move out of the kitchen and lay less claim to that realm of the world.

“We’ve had a lot of things happen around food systems here [UVM], but we have not had that ‘You read my paper, I’ll read your paper.’ nitty gritty,” Trubek said.

But don’t worry. That’s next up on their plate.