A Closer Look at Farm Labor 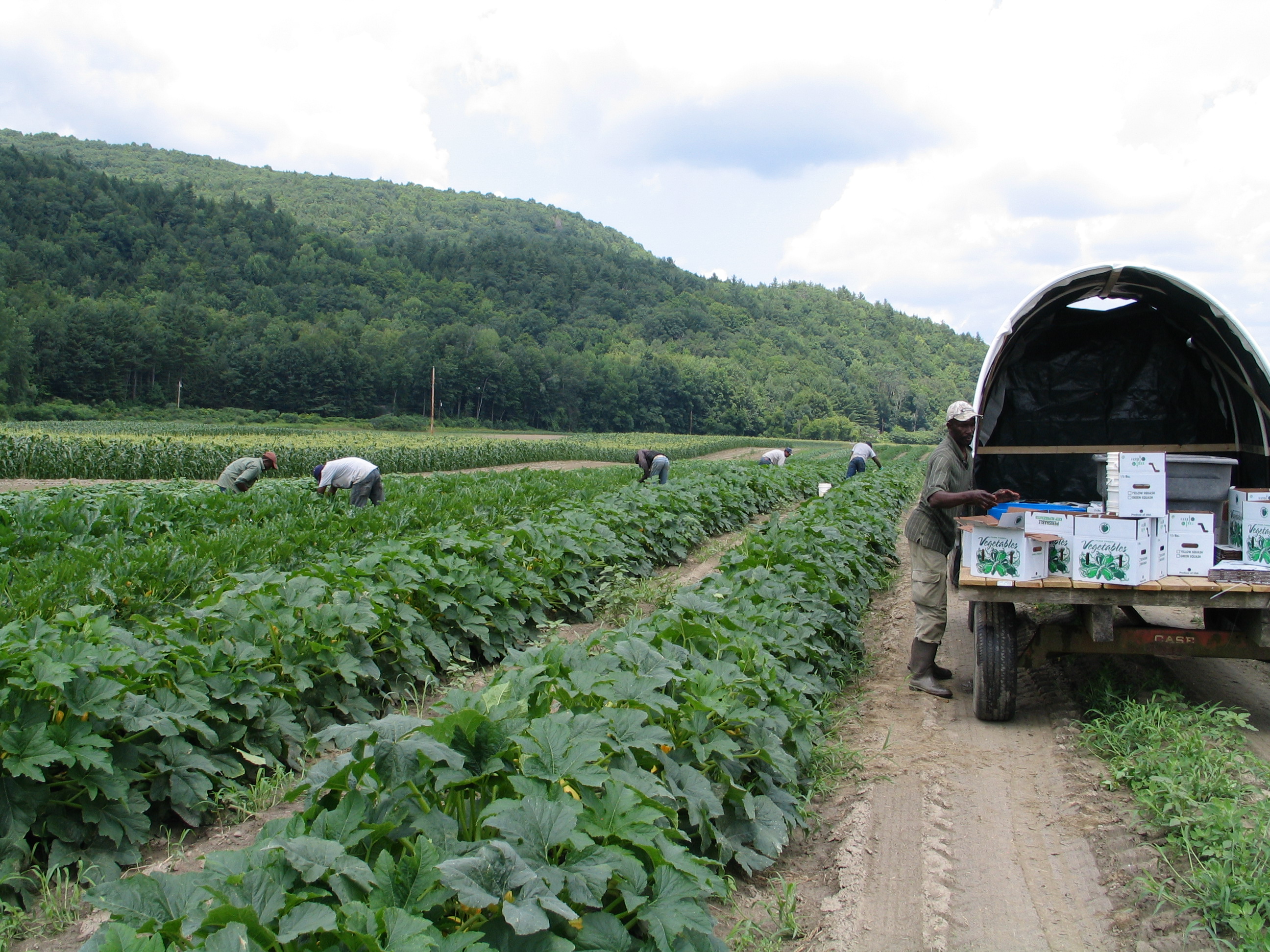 Jamaican workers harvest squash on a Vermont farm. Unlike the dairy industry, horticultural farms make use of a seasonal guest worker program called H2A, which provides VISAs for temporary workers from selected countries. These workers are well-paid, have government-inspected housing, and are well treated by their farm employers except in vary rare cases; as a result many of the men return to the same farm year after year.

Everyone knows that working on a farm work is hard work, but not many people know who is doing that work.

According to the U.S. Department of Agriculture, hired farmworkers make up less than one percent of all wage and salary workers, but they play an essential role in our food system. These laborers account for a third of all people who work on farms; the rest are self-employed farmers and their families. There are about twice as many hired workers on farms focused on growing crops than there are on those that produce livestock.

Farms spend a lot of money on hired labor. On average nationwide, it’s about 17 percent of variable operating expenses, but on those farms that produce labor-intensive crops like fruits, vegetables, and nursery products it’s more like 40 percent of these operating costs. Hired labor is needed to help with everything from preparing fields, planting crops, milking cows, managing pests, picking fruits and vegetables, processing, marketing, and other activities that have to get done in a timely and skilled manner if a farm is to be successful. Typically this work is physically challenging, often it’s seasonal, and frankly it’s low-paying compared to other professions. So it’s no surprise that many farmers have trouble finding workers. The methods they use to cope with this problem vary depending on the type of farm.

On small farms, including many that grow organic vegetables, interns are commonly hired. Well, not exactly. In exchange for labor, these young people get room and board for the growing season, plus a modest stipend. They also get hands-on education, so they’re eager to accept this arrangement. Technically this does not conform to labor laws, but it’s mutually beneficial so authorities don’t waste their time on enforcement. As these small farms get larger, busier and financially established, they usually transition to a workforce of legally-paid employees.

Many of the larger horticultural farms in the Northeast rely on migrant workers to meet their labor needs. They take part in a program known as H2A, a temporary seasonal labor program. This allows people from other countries to come here for up to 10 months to work, and it requires farmers to provide them with housing and pay an hourly wage that’s several dollars above the minimum wage. In Vermont, more than 400 people, mostly Jamaican men, are hired through the H2A program. They spend the growing season working long hours on apple orchards and vegetable farms. Some of these men have been returning to the same farms for decades, and most have good relationships with their employers, who appreciate their work ethic and their reliability. The majority of H2A workers come from Jamaica because the U.S. has a treaty with several Caribbean nations enabling their citizens to come here without a visa, thus the application process is much quicker than for people from other countries.

Most dairy farms are not able to utilize H2A since their labor needs are not seasonal.  They try to get local workers but even when good hourly wages with benefits are offered it’s hard to find people who want to do the work. The people who are willing to do this work come from other countries, primarily Mexico or Guatemala, are typically undocumented due to the lack of applicable federal visa programs.

Across the country farms employ undocumented immigrants, which some would say they’ve come here ‘illegally’. These people simply want to make enough money to support their families, and the great majority of them are hardworking and honest. They come here because they can’t make a decent living at home and many argue this is due to our own trade agreements. There is no federal program that allows agricultural workers to  work for a few years and then go home, so both our farmers and many of their workers are now between a rock and a hard place in their pursuit of economic survival.

In Vermont, it’s estimated there are up to 1500 undocumented workers on farms, mostly dairies. Nationally, the share of hired crop farmworkers who are not legally authorized to work in the U.S. has fluctuated around 50 percent for the past decade.

Simply put, our current food system would collapse without the farm labor provided by foreign workers, and we need to find ways to make it legal and safe for these people to contribute to our food security while maintaining their own safety, and their dignity.

To learn more, take a look at these resources: