Challenging the Concept of Food Justice in the Food Movement 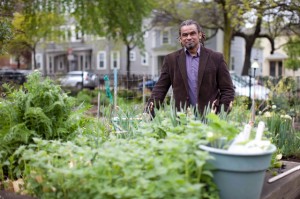 The article, Not My Revolution, is about Julian Agyeman, professor and chair of urban and environmental policy and planning in the School of Arts and Sciences at Tufts University. Agyeman is a critic of the food movement. He focuses on scholarship in a field that has come to be known as “food justice.” He believes food justice is more than making sure that food is good for your health, or produced in a way that’s good for the planet. It’s also about ensuring fair treatment for the workers who produce that food as well as ensuring that high quality, culturally appropriate food is available – regardless of a person’s income, race or ethnicity. With this, I agree.

What I’m troubled by are the broader implications of his argument that the current sustainable food movement doesn’t include anyone who isn’t white, educated, or middle class.

Agyeman castigates the Whole Foods crowd, of which he admits to being one, for romanticizing an agrarian past by visiting CSAs on the weekend to dig potatoes. He claims this brings back nostalgia for one’s white grandfather on the family farm – not so for the person’s whose grandfather was a sharecropper or migrant worker.

Is he correct? Do all white, middle class people involved in the food movement conjure up the memory of a family farm when visiting their CSAs? This criticism seems overly simplistic. I’m not sure that there are many people today who even have a family farm in their recent past. One wonders if Agyeman was influenced by Madison Avenue when it comes to creating this sentimental image. The many farmers I know are working 24/7, worrying about weather, pests and making ends meet. There is nothing nostalgic about this life – but perhaps that is what more people in the food movement want and need to see.

I think someone may want to pick a potato, not to conjure a cultural memory, but to experience what it’s actually like to pick a fresh potato from the ground because, possibly three generations back, no family member has done it. We’ve become so divorced from our food. People may want to plant a garden, or participate in a CSA because it’s less expensive than going to the grocery store; they may want to teach their children that diet and health are important and knowing where their food comes from provides an alternative to industrial agriculture where pesticides and fungicides and fossil fuel use is the norm.

The fact is most people haven’t the foggiest idea where their food comes from and what Aygeman perceives to be white nostalgia is actually a longing to be reconnected to a place in the soil – and that goes for people of any color or social status.

Agyeman continues: “Food justice is not just about provisioning of nutritionally appropriate food, but about maintaining the cultural significance of food.”  I couldn’t agree more. However, he takes the thought one step further, arguing that the “eat local” movement is too prescriptive and disdainful of immigrant populations who want to enjoy native foods. A Jamaican family, he writes, who wants to eat callaloo, a fresh leafy green, shouldn’t have to re-engineer their recipes and be told to substitute it with spinach – that’ a form of social injustice.

I am a white American who spends long periods of time in Mexico. I sometimes miss certain foods.  But I also am a cook, and I look forward to learning about the local ingredients and recipes of different cultures and regions of the country.  I don’t consider it an issue of social justice or prescriptive behavior, I consider it an opportunity to “taste” another place and learn to include it in my repertoire.

Historically, women have shared recipes and used the ingredients of their surroundings to make something delicious for their families.  Agyeman should understand that that the ‘callaloo’ made in Jamaica is different from the ‘callaloo’ made in Trinidad and Tobago in terms of the main ingredient (the type of leaf used). Jamaicans tend to use only callaloo leaf, salt, onions, and scallion and simply steam the vegetable, while Trinidadians use okra and coconut milk to make an entirely different dish with a different taste and consistency. It’s important to remember that the Jamaicans got the recipe from West Africa, where callaloo is actually amaranth leaf. In other parts of this region, callaloo is known as water spinach.  Does this mean that the Jamaicans were being prescriptive when they replaced the amaranth or water spinach with the callaloo?  I would guess that a recently arrived Jamaican cook would miss her callaloo (as she would know it) but that her good friend, who’d been here longer, might tell her that the American spinach was a good substitute.  She would be sharing secrets as all good cooks do to find the closest match for the flavor they want.

To me, the food movement is an inclusive because, at its heart, it’s about good food for everyone.  The planting, cooking, eating and sharing of recipes, and even substitutions, between cultures, socio-economic groups, and ethnicities is ancient and universal. LaDonna Redmond (who spoke at UVM’s Food Systems Summit) reminded me recently that: “food justice isn’t just about urban agricultural or farmers markets or CSAs, it’s about control and ownership of our food system and we all better band together in this movement because you never know who is going to be your ally”.

We must embrace this movement as a way to bring disparate groups together and continue to ask Agyeman’s questions about what kind of a system might decrease injustice and inequality – while we pass the callaloo and the spinach celebrating culture and the bounty of our agricultural regions.