Is posting calorie counts on restaurant menus enough to make us healthier? 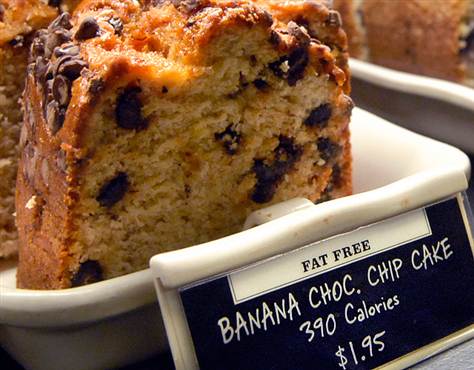 Although touted as "fat free," a slice of banana chocolate chip cake at Starbucks packs 390 calories, as New Yorkers discovered when the coffee chain began displaying calorie counts to comply with a new New York City law. Photo by msnbc.com.

Guest blog post from Rachel K. Johnson, Ph.D., R.D., Professor of Nutrition at the University of Vermont. Dr. Johnson is Vice Chair of the American Heart Association Nutrition Committee and a member of the President’s Council on Fitness, Sports and Nutrition Science Board. This blog post was originally published by EatingWell and is accessible here.

Call me a geeky dietitian, I don’t care. I’m a diehard nutrition-label reader and love having that information readily available. So imagine my delight when I recently went into Starbucks in my hometown in Vermont and finally saw calorie counts prominently displayed on the coffee menu board and in the bakery case. I’d been waiting for restaurant calorie labeling to come to my state ever since I saw it in New York City a few years ago. Later this month, the FDA plans to issue the final proposed regulations for nationwide restaurant menu labeling.

I find it worrisome, but not surprising, that recent headlines have been screaming that restaurant calorie labeling isn’t doing a thing to change consumers’ buying habits, especially when the results are actually mixed among the small number of studies published on the topic.

A study conducted by Stanford researchers in 2008 at Starbucks in New York City found that calorie labeling led to an average 6 percent reduction in the number of calories purchased (247 to 232 calories) for all customers. However, people who bought more than 250 calories prior to calorie posting cut their calories by 26 percent—or 65 calories. While these changes in purchasing habits aren’t overwhelmingly different, over time small adjustments like these can potentially lead to healthier weights.

Another study, published last month in the International Journal of Obesity, found no change in the buying patterns of 266 teenagers and parents of young children patronizing Burger King, McDonald’s, Wendy’s and KFC in New York City (the first city to require restaurant calorie labeling) compared to what 83 teens and parents in nearby Newark, New Jersey, purchased—where calories weren’t listed on menu boards.

A third study, published in the journal Health Affairs in 2009, collected 1,156 receipts from the same fast-food restaurants two weeks before and four weeks after calorie labeling took effect in NYC. Again, the researchers found no significant difference in what customers purchased before and after labeling.

While these studies make some good points, they have limitations.

The studies verified what we’ve known for a long time—the number one influence on customers’ food choices is taste, followed by price. Fat-/salt-/sugar-laden fast food tastes good to a lot of people and it’s cheap.

Two of the three studies were conducted only in fast-food restaurants in low-income, minority communities. Plus, the study periods were short—and I believe it may take repeated exposure to calorie information over time before consumers change their food choices.

Perhaps another reason calorie labeling isn’t working is because the information isn’t helpful if you don’t know how many calories you need in a day. (Must-Read: How Many Calories Do You Need?) I found it compelling that in the International Journal of Obesity fast-food study, 60 percent of the teenagers questioned thought adults needed less than 1,500 calories per day—which is lower than the reality of about 1,800 (for women) and 2,200 calories (for men). I think we need a campaign to help people understand their daily calorie needs, similar to the “Know Your Numbers” campaign launched years ago by the National Heart, Lung, and Blood Institute, designed to help Americans understand what their cholesterol and blood pressure numbers mean.

I for one am far from ready to give up on restaurant calorie labeling, but I’m not so naïve as to think that it is the solution to our nation’s obesity problem. After all, we’ve had calorie and nutrition information on grocery-store foods since the mid-’90s and it hasn’t stopped us from getting where we are today. But, when about 60 percent of Americans read food labels (and report consuming fewer calories, less saturated fat, cholesterol, sodium and sugars as a result), and then factor in that foods eaten away from home account for more than half of what Americans spend on food, we need nutrition information in restaurants. No one thing will solve the obesity problem—not soda taxes, not banning junk food in schools, not calorie labeling in restaurants. But together they can help create an environment that will make it easier for many of us to make healthier choices and achieve and maintain a healthy weight.