Vermont is #1 for Locally-Grown Foods 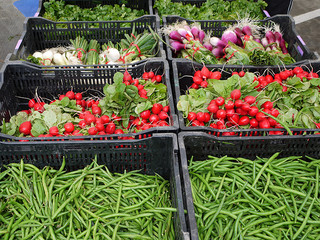 That’s a headline I like to see. What I like even better is the fact that there is now a Locavore Index.

Drawing upon U.S. Department of Agriculture and census figures from 2012 and 2011, the 2012 Strolling of the Heifers Locavore Index  ranked Vermont as the top state in its commitment to raising and eating locally grown food based on the number of farmers markets and community supported agriculture farms we have, each of which indicates both the availability and demand for locally-produced food. We have 99 farmers markets and 164 CSAs, with a population of fewer than 622,000. (For contrast, Florida was in the bottom five with only 146 farmers markets and 193 CSAs for 18.5 million people.) 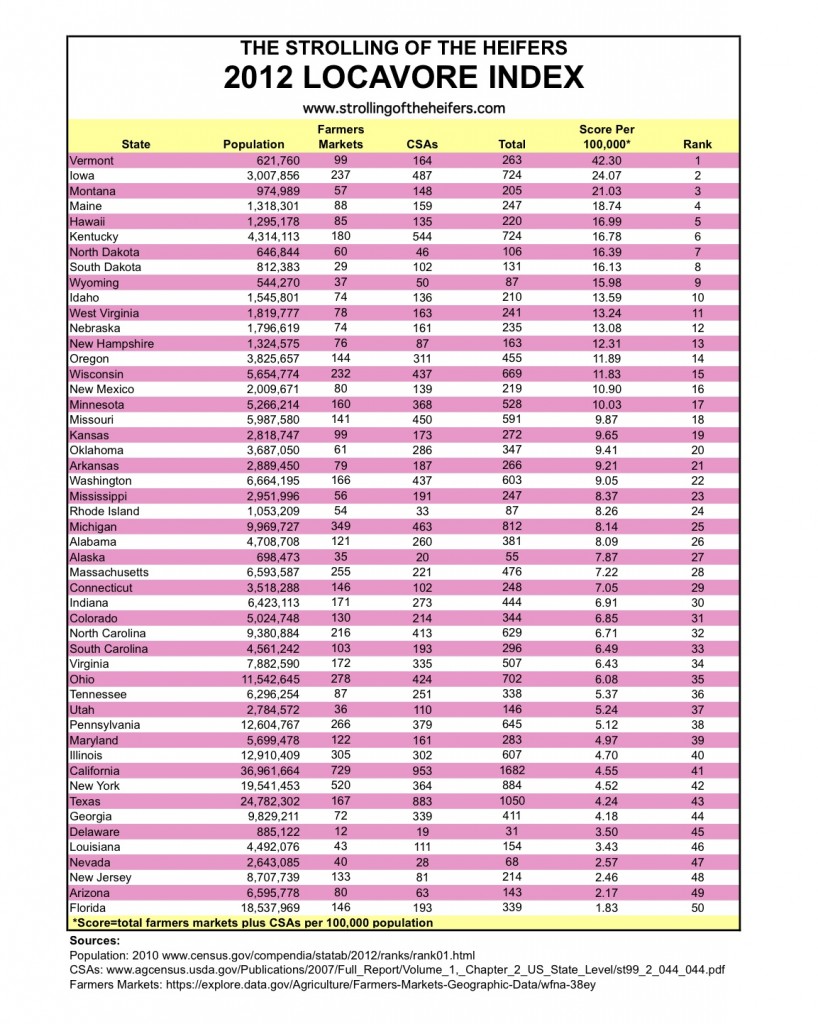 And Vermonters are fomenting the movement, not only as consumers, but as leaders and policy makers from our Farm-to-Plate and Farm-to-School programs to innovative food incubators like the Vermont Food Venture Center and Vermont Agricultural Innovation Demonstration Center, which help Vermont farmers develop new products, pioneer new business models, and find new markets.

All of this underscores a critical idea as we engage in conversation about the future of our food systems.

That is that the future of food is small – small farms, small-scale agriculture, specialty food makers, farmers markets, and CSAs. Small means big change. And small is getting bigger.

Why is consumption of local foods on the rise? We consumers are concerned about food safety. Contaminated food has caused major health crises – with the food coming from large multinationals. We want to know where are food is made, how it’s made and who makes it. We want to support our local economy – local foods create local jobs. We want to increase the health of our communities – local foods are fresher, losing less nutrients and incurring less spoilage. We want to reduce environmental pollution – local foods travel lesser distances, using less fuel and generating less greenhouse gases. Local food also encourages diversification of agriculture, reducing the reliance on monoculture — single crops grown over a wide area to the detriment of soils – which has destroyed farms and soils globally and caused the major food crisis in which we find ourselves.

…there’s more to it, said Jessica Prentice, a San Francisco Bay-area chef who coined the term locavore. “Really what it’s about is moving into a kind of food system where you’re connected to the source of your food,” Prentice said. “You’re buying from people that you know or can meet and you’re buying food grown in a place that you can easily drive to and see. “This is more about creating an oasis really in the context of a globalized food system that’s completely anonymous,” she said.

Social connection. Food connects us to each other. It’s an obvious, but forgotten idea.

The movement toward local is still evolving. Chiefly, there are still a lot of definitions to clarify: What is local? Food from the same state in which it’s produced? Food produced within 100 miles of where it’s consumed? And further, how do we reconcile local foods with energy-intensive processes used to produce them?

How do you define local food?