A Major Cause of Obesity? Less Time in the Kitchen

Since the 1960s, even though men have increased their time spent cooking slightly,  women have decreased their daily cooking time by more than 33% to about an hour.  During that same time period, obesity rates in the U.S. have skyrocketed. More than two-thirds of us are now overweight and a third of us are obese.

What you may not know, or believe, is cooking – or the lack thereof – plays a role in our obesity epidemic.

The University of Vermont’s recent study of time use and obesity in single women, ages 31-50, concluded that cooking actually may help curb obesity.

Being the primary cook in a household is associated with having a BMI 1.72 points lower, as compared to non-cooks. And, every additional 10 minutes spent cooking (and cleaning up!), decreases BMI by 0.13 points.

According to the Centers for Disease Control, the average American woman is 5 feet, 3.8 inches tall and weighs 164.7 pounds. Her BMI is 28.4, closer to obese than a healthy weight. If that average woman is the primary cook and spends an hour cooking, she has a BMI of 25.8, weighs almost 15 pounds less than the average, and is closer to being at a healthy weight.

(Of course, cooking is only a proxy. It is likely that cooks who spend time in the kitchen are actually preparing food, not only heating up convenience foods or take-out, which has been shown to contain more calories and saturated fats than home-prepared foods.) 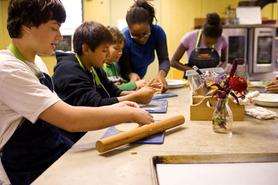 Our charge is clear: we need to learn to cook and we need to teach our children to cook.

We are seeing a resurgence in cooking as curriculum –From Alice Waters’ Edible Schoolyard project in California to Family Cook Productions in New York City, cooking is finding its way back into schools.  And adult programs are expanding.  From Cooking for Life to Cooking Matters, free and low cost classes are being offered by non-profits and land grant university extension personnel.

So, lobby to bring back cooking education as a public health class, and reposition it as something you do for your health, not as a chore.

Our lives depend on it.