Trekking in Nepal and Exploring Culture 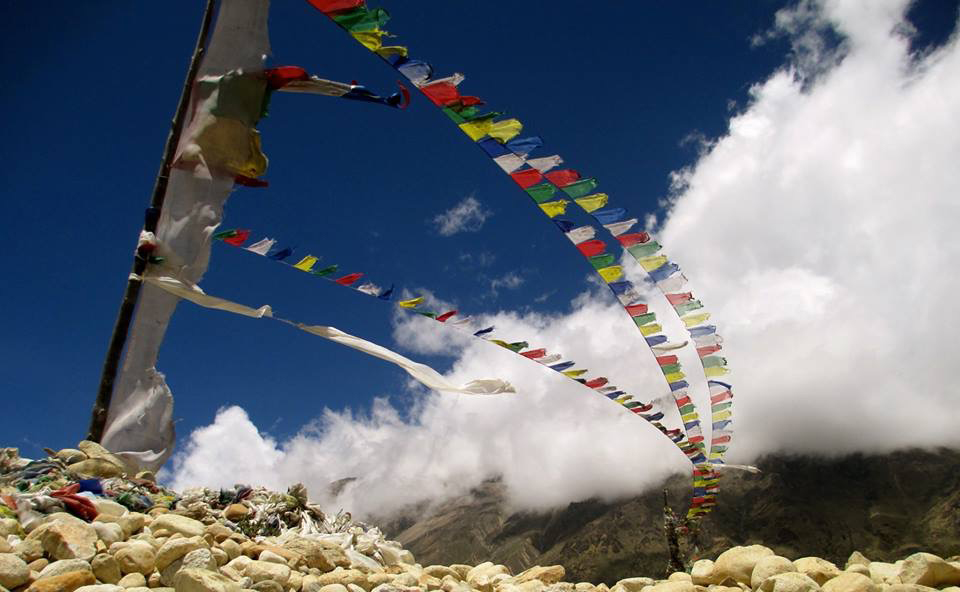 Studying abroad was always an integral part of Madison Symes’ (’15) plan. Her grandfather had traveled to Nepal and spoke highly of his experience, so when the opportunity arose to earn UVM credit and spend a month trekking in the Himalayas, she jumped at the opportunity.

“I wanted to experience something new,” says Symes, a Global and Regional Studies major. After attending the UVM info session, she was eager to jump on board. “Seeing photos of the region and learning about what we would be doing was really exciting. I just wanted to be there to learn more about the culture.”

To prepare for the course, students spent two weeks on campus learning about regional history, culture, and geography prior to the trip. Symes says the sessions leading up to her travels covered all the bases – from basic language skills to the religious, dietary, and environmental aspects of the region.

Trekking in Nepal: A Cultural Experience

In early June, the group, including 14 UVM students, faculty members, and guides, trekked through the remote Mustang region, exploring rural communities and development while hiking the mountains. They navigated small communities, cultural sites, and the vast and rugged beauty of the Himalayan landscapes.

Nepal is home to nearly 29 million people. The population is primarily rural (Kathmandu, the largest city, has less than 1 million inhabitants) and primarily Hindu, with more than 80 percent of the population adhering to that faith.

Wedged between the high wall of the Himalaya and the steamy jungles of the Indian plains, Nepal is a land of snow peaks and Sherpas, yaks and yetis, monasteries and mantras. It is also a collision zone with the towering Himalaya Mountains forcefully plowing into mainland Asia. 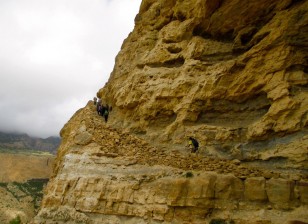 Nepal also marks the collision point between Hinduism and Buddhism, between the Tibeto-Burmese language group and the Indo-European, and between Central Asian culture and Indian culture. It’s little wonder that this beautiful and diverse country has fascinated travelers and explorers for centuries.

“Kathmandu is a busy city. It’s a buzzing, really intense place,” she says. “Then we went to the Mustang region and you could hike all day without seeing people.”

It was an eye-opening experience. “The Mustang region has such a small proportion of travelers,” she adds. “It was really interesting to be in this isolated region and see how different it is from the cities or the Everest trekking routes.”

Venturing into more remote territories was fascinating. “I thought it was really interesting how the people did not want to disappoint us. One of our guides was an energetic, old Nepali man named Sri. He would constantly tell us that we only had ‘a little up, a little down, and then you’re there!’ It was clear that he just didn’t want to dishearten us when there was much more walking to do! His little up and little down could mean 6 to 7 more hours of trekking,” she says.

Throughout the journey, the group adapted to communication differences: instead of saying “no” directly, the Nepali locals would say “Okay, thank you.” Symes says, “I realized that differences in language can speak about a culture. Instead of making someone feel uncomfortable, they spoke in a way that affirmed what the person said and then moved on. I realized we are culturally abrupt, so I’ve tried to bring this back home and practice saying ‘Okay, thank you’ to my roommates.”

Talking with the guides was very helpful. “Everyone was very friendly. We got to visit with youth groups in some of the most remote areas and learned about changes they are trying to make with work, school, and health care,” she says. “We visited a community center where the young people hung out. They had a library, but most of the books were in English so it wasn’t totally accessible to the locals.”

Hiking provided visits to communities otherwise inaccessible. “I’m not a super active, outdoorsy person, but I did it! I think my legs had more of a shock from trekking than my brain did adjusting to the culture,” she says. “We got to see and experience so much.”

As expected, things don’t always go as planned, but lasting relationships develop. “I made such incredible friends on the trip. You really get to know each other,” she says. “We learned to be really flexible and get creative, and the guides were really incredible. I’ve stayed in contact with some of them on Facebook.”

The professional guides, or Sherpas, led the students through the mountains, helped them carry supplies, and set up camp, all while educating the students about Nepali landscape, culture, and traditions. “They even played Nepali music to encourage us along the trail,” Symes says.

One of Symes’ surprising realizations was how people can live quite simply. “It was eye-opening to see that we have so much more than others around the world,” she says. “My experience in Nepal really changed my perspective. I think it’s easy to lose that appreciation once you get back into your normal life, so I’m trying to remember what I learned there every day.”

It is apparent from Symes’ fond recollection of studying abroad in Nepal that she relishes having been immersed in Nepali traditions and philosophies. Symes enjoyed her travels so much that she decided to stay on and keep traveling in Nepal, where she spent another month trekking to the Everest basecamp. “I love to travel, so spending a longer amount of time in a country is always a better way to experience a culture and understand how people live,” she says.

Symes says she would recommend the program to other students in a heart beat. “Right now is the only time in your life when you can travel without dropping any of your other obligations. Taking a course like this is an incredible way to see the world, while learning, which is an opportunity that most people just don’t get,” she says. “It can be scary to step outside of your comfort zone, but it’s always worth it in the end.”