Melquiades “Kiado” Cruz sits with a modest smile, looking around the room at the faces of the newcomers in Oaxaca, a group of 14 students from the UVM’s semester abroad in Oaxaca, Mexico.

Kiado comes from a small Zapoteco village, called Santa Cruz Yagavila, located in the Sierra Norteof the state. He has decided to join us to talk to us about something called comunalidad, a term that is really the essence of many indigenous communities in Oaxaca. There is no direct translation for this word into English, so we can refer to it as “communality,” which essentially means a “convivial way of living,” and something that governs the Zapotec communities in the Sierra Juárez.

I first heard this term when I was on the UVM Oaxaca Semester Abroad Program in 2010. I was studying Community and International Development, so the term and idea was intriguing, and something that I still haven’t quite grasped completely.

After graduating from UVM, I moved back to Mexico, and after living here for three years, the term is still something “foreign” to me, perhaps because it’s only practiced in specific regions of Mexico, one of them being in Oaxaca. In fact, in the majority of the municipalities in Oaxaca, communities practice this type of “collectivism,” as they do in the neighboring states of Chiapas, Puebla, Guerrero, and in a few other countries in Central America.

So what is comunalidad? As Kiado explained, it is a system based on social relations and the idea of reciprocity, and each member of the community has responsibilities and commitments that they need to fulfill for the collective whole. 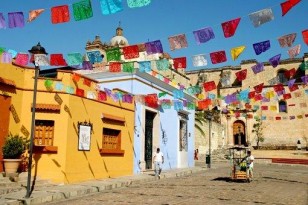 It sounds like a type of community service, but it goes much deeper than that. There are important elements of communality, and these indigenous groups follow a set of rules called usos y costumbres (customs and traditions):

Asamblea (assembly) is the method of making collective decisions within the community. Both men and women participate, and different tasks are handed out to various community members every year, all the way from street clean-up to police officer (there is a hierarchy of tasks). There are roughly 12 cargos (civic obligations) that each person carries out within a 40-year period. In this sense, everyone contributes to the societal roles and gives back to the community by protecting, cleaning, making decisions, etc, generally without any monetary remunerations.

Tequio is the unpaid contribution and participation of everyone within the community when a project needs to be carried out, such as providing physical or intellectual labor. Everyone comes together to work for the common good on a particular day.

Fiesta is when the community celebrates itself, and when it presents itself to the numerous visitors. Food, drink, music, and entertainments are provided for everybody, just to feel the joy of being part of a community.

This just scratches the surface of the idea of comunalidad, and I feel as if I’m not doing it justice because the reality is in experiencing it and talking to those who inhabit it.

The Essence of Community

We may never understand what it’s like to be part of such an interwoven group of people, but if we can take one thing away from this experience of talking with Kiado, of learning about the Zapotecs and other indigenous groups, we can learn that alternative ways of living — living in a world that accepts pluralism — is not only possible but necessary.

We can also learn about community support, and how through finding our place within our own societies, we can contribute, connect and communicate in order to discover our own identity and live more autonomously. These Oaxacan groups could probably teach us a thing or two about the idea of “community development” and “environmental protection.”

To learn more, read Melquiades Cruz’s paper, titled, “Maize and Communality: Sources of Life for a Future of Our Own.”

Or better yet, book your next flight to Oaxaca.

E. Claire Goodwin is an alumna of UVM who graduated in 2011. She currently lives in Mexico and is the assistant director to the Oaxaca Semester Abroad Program.