Professor Plans to Put Vermont at the Forefront of Public Health 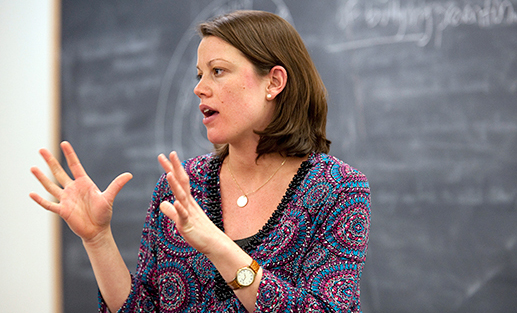 Bernice Garnett was surprised when UVM offered her a job as an assistant professor in the College of Education and Social Services. George Salembier, chair of Education, was surprised she accepted. “Bernice was highly sought after coming out of Harvard’s School of Public Health, so I wasn’t sure we could get her,” he says. “She is one of the top hires we’ve had a in a long time.” Equally impressed was former Vermont Education Commissioner Armando Vilaseca, who told Salembier that he wishes every teacher in Vermont would take Garnett’s “Bullying and Youth Violence Prevention” course. That might be difficult considering that the new class is growing in popularity and is expected to exceed capacity by next semester.

Garnett, a public health prevention scientist, sat down with UVM Today recently to talk about her aggressive research agenda; why she’s made multiple trips to the Statehouse in Montpelier; and how she plans to put Vermont at the forefront of public health.

Your research covers a wide range of topics such as food systems, bullying, childhood obesity, eating disorders, food access and others. How do you plan to incorporate all of these into your research?

I’ve always been interested in childhood obesity preventions. Within that, one arm has been related to food access and food insecurity, which is a huge issue in Vermont. There are a lot of wonderful people working on food systems here, so I’ve been trying to get affiliated with this initiative at UVM. We know that food insecurity leads to obesity, which is this sort of a weird paradox because you would think that if there was less food, there would be less calories and less weight gain. Well, we actually know that the kind of food that is most available is generally more calorie-dense and that people generally eat much more of it, because they are worried about when that next meal is going to be. This leads to youth engaging in emotional eating and binge eating and sometimes the hoarding of food.

So there’s the child obesity piece and then there’s the piece related to bullying and harassment. We know children are bullied because of their weight more than any other identity, primarily because it’s accepted and there’s this notion that it’s your fault that you are this way as opposed to your race, sexual orientation or religion. The youth I’ve worked with want to lose weight, but it’s really hard, especially if they come from a low-income area, because they don’t have control over what they eat at home. So often, overweight youth use food as a coping mechanism to deal with all of the hatred at school.

It sounds like you take a holistic approach to your research on public health.

I was very much focused on physical health, but eventually realized that we have to address the social, emotional and behavioral health issues that accompany excess weight. I eventually realized that I can’t work in childhood obesity prevention unless these kids feel safe in school, feel empowered and connected because they have such low self-esteem that nothing is going to happen in a sustainable way. That’s when I took a step back and realized I needed to think more holistically about how I saw health and not come from this traditional “calories-in, calories-out” perspective. I had an “aha” moment when I saw weight-based teasing happening in a gym class that I was commissioned to run, and I thought, “I can’t control this behavior.” That’s when I realized that childhood obesity prevention programs are completely ineffective unless we change the way we think about weight, talk about weight with kids and how we are developing them as individuals. That’s how I became more interested in school climate and culture at the broader level. We’re starting to see empirical evidence showing that healthy students are doing better in school from a cognitive functioning perspective and a social-emotional perspective.

Your class on bullying is incredibly popular. Why do students find it so interesting and what do you hope they take away from it?

In public health we talk about the social determinants of disease, where we think about the fact that poverty, race, and class and where you live affects everything. It makes total sense that low-income communities of color are more overweight than their white peers. It’s not because they are making bad choices, it’s because their choices are embedded within the context in which they live. That’s what I try to teach my students. If I’m on food stamps, and I get three dollars a week to decide what I’m going to eat with my family, I’m probably not going to choose one head of cauliflower over 15 boxes of ramen noodles that I can stretch out, especially during a time when food stamps are being cut. As a society, we tend to think that people who are overweight got there because of their own choices. It’s the same thing with addiction in terms of a lack of empathy that we express. We’re starting to study the effects of sugar on the brain and research suggests that sugar is actually addictive, releasing similar dopamine levels as some illicit drugs. I think we need to think about obesity from an addiction standpoint as opposed to thinking that more health education will lead to better choices.

I understand you are a frequent visitor to Montpelier? What do you hope to accomplish by going there?

I really believe in the value of applied research because it can influence policy, and public health policy has a direct effect on people’s lives. Cigarette bans, trans fat bans, seat belts, drunk driving – that’s all public health. I’ve gone to Montpelier multiple times to meet with as many legislators and people at state agencies as possible to ask them what their strategic plans and priorities are, and how UVM can answer any questions they may have. I never thought that I could influence policy, but I’m starting to understand the power of data and research.

In my mind, policy is the only way to guarantee that there is universal access to a specific type of solution, therefore having the potential to reduce health and educational disparities. Something is wrong when the life expectancy of a black man in Harlem is comparable to a man in Bangladesh or that three subway stops away, your life expectancy goes down eight years in some U.S. cities. Research-based policy, implementation and evaluation are the most effective way to reduce these disparities. I came into this field wanting make a difference on a state and potentially federal level, and I think Vermont is the perfect place to pilot some innovative health care models that we can showcase nationally. It’s a small state where you can have a lot of impact, and UVM can play a major role by providing evidence-based research to create effective policy.

Jon Reidel is a staff writer for UVM Communications.

This piece was originally published on UVM Today.