Posted by Erica Houskeeper on September 10, 2015 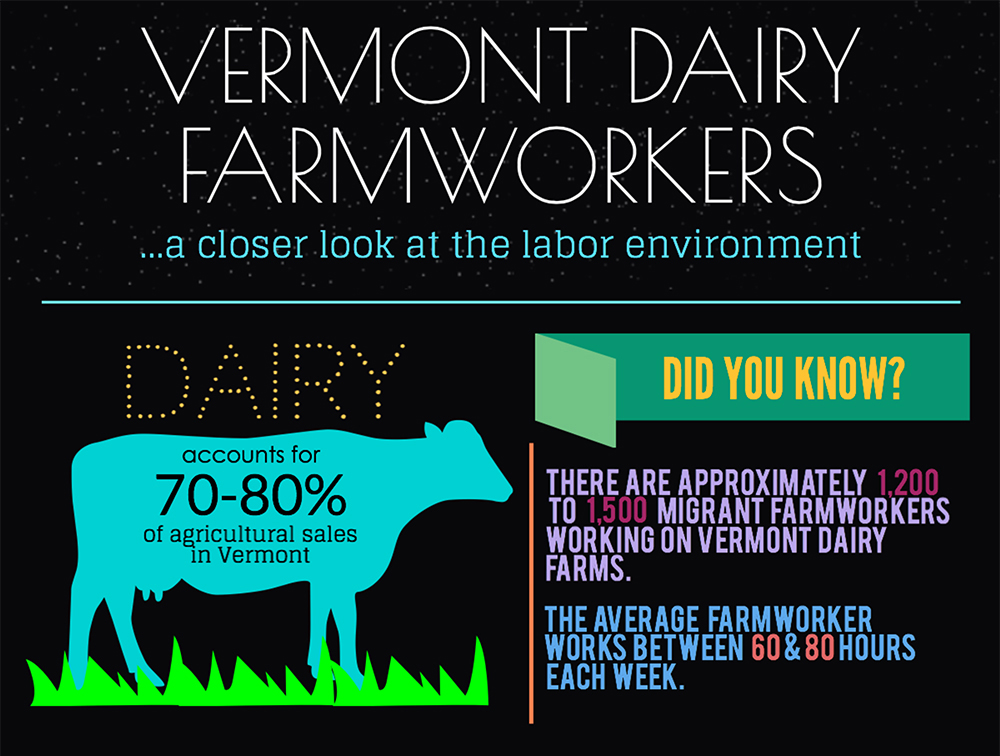 For student Al York, an assignment to detail the struggles and economic injustices of migrant farm workers went far beyond the classroom.

When York was given an assignment in the UVM Food Systems and Public Health class to create an infographic, the student wanted to highlight the challenges of migrant dairy farm workers in Vermont.

As York’s infographic outlines, the hardships of Vermont migrant farm workers are many: a higher burden of disease, lower pay, and tenuous access to health care and benefits. Dairy is also big business in Vermont, accounting for 70 to 80 percent of agricultural sales in Vermont. Meanwhile, there are between 1,200 and 1,500 migrant farm workers on Vermont dairy farms, each putting in an average of 60 to 80 hours per week. 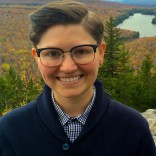 York, who is working on earning a Master of Public Health and entering the UVM College of Medicine this fall, was drawn to Migrant Justice’s Milk with Dignity Campaign and their goal of economic justice in the dairy supply chain.

“Migrant Justice’s work is of critical importance to Vermont,” says York. “Because Vermont has such an agriculture-driven economy, the topic of farm worker health equity and justice hit close to home.”

In June, Migrant Justice reached an agreement with Ben & Jerry’s to recognize the fundamental human rights of migrant workers in dairy supply chains. Ben & Jerry’s agreed to negotiate with Migrant Justice about participation in the group’s five-point program designed to improve labor standards.

UVM Assistant Professor Lynn Blevins, MD, MPH, who teaches Food Systems and Public Health, credits York for first giving her the idea of making infographics a class assignment. York had previously worked on a recreational water training infographic with Blevins for a public health internship. When Blevins was in the process of developing the Food Systems and Public Health course, she thought an infographic component would be useful to students.

“I am always looking to incorporate practical skills into my assignments, so I asked Al about using this idea for an assignment in the course,” said Blevins. “Infographics are increasingly being used as a method of communicating and can include a mix of text, images, graphs and/or figures. They are pleasing to the eye and inviting, making the consumption of health information less daunting to many people. I emphasize concise communication as an important public health skill in all of my classes. You can have great information, but you need to present it such that others will be receptive to it. If they don’t read it, then you haven’t been effective in getting your message across. An infographic provides one such way to make information more accessible for people.”

Blevins points out that the CDC and the American Public Health Association frequently use infographics, which students reviewed as examples before creating their own. Students created infographics on a range of topics including foodborne illness, food insecurity, obesity, healthy foods in health care, and even black market foods, she said.

Meanwhile, York was especially excited to create an infographic and make something that could potentially be used publicly by a local organization, such as Migrant Justice.

“While working on the project, I learned a lot about the challenges that Vermont’s dairy workers face, including problematic labor and housing conditions, and the fantastic solutions proposed by Migrant Justice to alter the labor landscape in favor of ‘fair dairy,’” says York, who eventually hopes to integrate public health advocacy work with a clinical practice after medical school.

York explains that as a student, the value and usefulness of infographics has become apparent.

“They are such a simple and effective way to display information to the general public, and are surprisingly easy and fun to create,” says York. “Since creating the infographic for Migrant Justice, I have been working on several infographics for recreational water safety and waterborne pathogens for the Vermont Department of Health. I’m sure that many other opportunities to create public health-related infographics will arise in the future.”