Vermont Asthma Rates Surprisingly Among the Highest in the U.S. 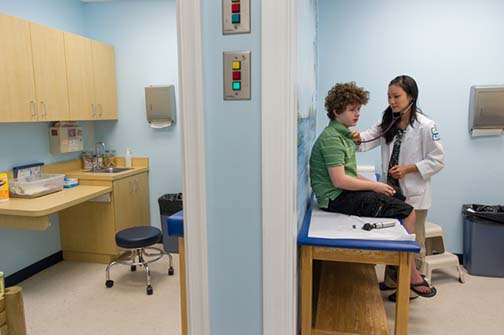 For most people, Vermont’s scenic beauty comes with the promise of fresh, clean, mountain air. Yet in reality, many Vermonters have trouble breathing. The state, it turns out, suffers from one of the highest asthma rates in the country.

“While Vermont has been rated the second healthiest state in the nation, the rising prevalence of asthma remains a problem,” says Jane Wolforth, MPH, manager of the Vermont Asthma Program, under the state Department of Health’s Division of Health Promotion and Disease Prevention. “Historically, New England asthma rates have been high, and since 2007 the current asthma rate among Vermont adults has been significantly higher than the U.S. average and in recent years it has been among the highest in the country.”

Asthma inflames and narrows the airways and causes wheezing, coughing, shortness of breath, and tightening in the chest. It is one of the most common chronic diseases in the United States and in Vermont and a leading cause of absenteeism among schoolchildren. The condition costs the country more than $56 billion annually to treat, according to the U.S. Centers for Disease Control (CDC). In Vermont, asthma-related emergency room visits and hospitalizations cost more than $7 million annually.

Asthma currently affects 11 percent of all adult Vermonters, and that rate has not changed since 2011, according to the latest data from the annual Vermont Behavioral Risk Factor Surveillance System (BRFSS). The U.S. rate is 9 percent. Asthma rates are even higher in the Rutland and Springfield areas.

However, no one knows what causes asthma, or why Vermont — and, in turn, Rutland County – has a higher asthma rate. Instead, public health officials know only which populations tend to suffer from asthma and which allergens and irritants promote asthma attacks.

According to the state’s Department of Health’s report on The Burden of Asthma in Vermont, asthma is more prevalent among women; those with household incomes below 125 percent of the federal poverty level (in the most recent guidelines, that would be about $29,813 for a family of four); those who did not graduate from high school; those who reported they were unable to work; and those who reported they were unemployed.

Specifically, the report notes that:

However, because state public health officials’ main focus is on asthma treatment and prevention of asthma exacerbations, she explains, they can only make educated guesses about the connections between these triggers and Vermont’s high asthma rate.

“Asthma rates are higher among those who use wood stoves or wood-burning furnaces, which many rural Vermonters have. About 30 percent of people with asthma use wood stoves for heating purposes. But we can’t say for sure that that is what is causing their asthma, only that it’s a trigger for their asthma symptoms,” Wolforth says. “The same goes for pets. Vermont has one of the highest pet ownership rates in the nation, and a high asthma prevalence, but we don’t have the research to prove any direct link.”

In fact, “the single most common environmental trigger among adults was having an indoor pet,” affecting 73 percent of the adults with asthma and 80 percent of children, according to The Burden of Asthma in Vermont. “Carpeting in one’s bedroom and allowing pets in the bedroom were also common with more than half of youth and adults with current asthma reporting each respective trigger.”

In general, state public health officials surmise that Vermont’s high asthma rates are connected to “the older housing stock; the fact that Vermont is such a rural state, so access to proper care might be a barrier; to increased smoking rates; and to lack of awareness around asthma symptoms and how to properly control its symptoms,” Wolforth explains.

For instance, Vermonters who have difficulty breathing, she says, might attribute their wheezing to an allergic reaction, to obesity or to other factors. They don’t seek treatment because they don’t even know they have asthma.

Statewide education campaigns, therefore, are key. Even among those who do know they have asthma, less than 10 percent have attended an asthma management course that would help them better control their asthma and avoid an emergency room visit or hospitalization, Wolforth says. And only about a quarter of Vermont adults and half of all children with asthma have received asthma action plans from their medical providers. Patients need the plans to understand how best manage their chronic condition.

When it comes to improving the overall asthma rates, Wolforth says, Vermont is “really focused on promoting asthma awareness, management, and prevention in the school, work and home environment. Our big focus is on asthma education so people can manage their condition. After all, asthma doesn’t go away; it’s for a lifetime.”

For starters, asthma patients should:

By understanding who gets asthma, state public health officials can better target their education campaigns and make a real impact on reducing asthma rates and hospitalizations, Wolforth says.

According to The Burden of Asthma in Vermont, the state’s education and prevention campaigns particularly should focus on:

The Vermont Asthma Program, which is funded by the CDC, tracks asthma rates among these and other affected populations; educates patients, health providers and caregivers about proper diagnosis and treatment; works to increase asthma awareness; and works with partnering organizations to effect policy change, such as curbing tobacco use and car idling, to improve indoor and outdoor air quality for all Vermonters.

For instance, the program has:

Healthy Vermonters 2020, the State Health Assessment Plan, includes goals to reduce asthma rates in the state. The plan notes one bright spot: a decline in hospitalization rates among both adults and children with asthma.

“Utilization of acute inpatient care for asthma is an indicator of the health of Vermonters who have asthma,” Healthy Vermonters notes. “Asthma hospitalizations have been declining over time with improved clinical care and patients following treatment guidelines, and may be due to efforts to mitigate environment triggers that can exacerbate asthma.”