For many students, the traditional pathway to a college degree directly following high school isn’t always possible—or even a consideration—but as options and plans evolve, more and more nontraditional students are finding their way into university classrooms, both on-campus and online.

Josh Peckenpaugh and Merisah Trisciuzzi recently spoke with us about their journey to UVM through military service, their shared experience as Anthropology majors, and the Online Degree Completion Program starting at UVM this fall, providing an exciting opportunity for adult learners seeking to finish their bachelor’s degree and compete in today’s highly competitive job market.

Having served eight years in the Navy as a Corpsman—the military medical unit—including two deployments to Afghanistan (his first with the 1stBattalion, 6thMarines, and the second with the 2ndBattalion, 7thMarines), Peckenpaugh, born in New Zealand but raised in California and Arizona, had imagined a career in the military since he was young.

“I didn’t really focus too much on school when I was a kid, so I was like, I’m going to join the military and be there forever,” Peckenpaugh stated. “But then, life changes—things change—and I thought, I’m going to go to college, figure something out.”

After his second deployment, Peckenpaugh lived in Saratoga Springs, NY, where he worked at the Naval Health Clinic—and first learned about UVM. His credits his love of travel for allowing him to visit Burlington a few times on his own and made several trips to the area with his local rugby team. “While I was up here, I just really enjoyed it and liked it,” Penckenpaugh said. “And I thought, if I could use the GI Bill to go pretty much wherever I wanted to go for college, I thought that UVM was a really good school.”

Setting Her Sights on UVM and Anthropology 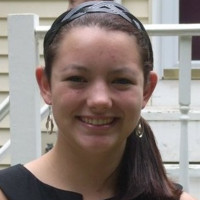 For Trisciuzzi, college was always on her radar. Originally from Stafford Springs, Connecticut, Trisciuzzi had been accepted to several universities—including her first choice, UVM. “It was a snap decision,” Trisciuzzi said of joining the military. “I realized that I wasn’t going to be able to pay that kind of money and I didn’t want to take out any student loans, so I joined just to pay for school.”

Trisciuzzi joined the Marines in 2012 and spent all four years of her service in Camp Pendleton, California as a member of the Combat Logistics Regiment 15 working as an ammunition technician. While stationed in California, Trisciuzzi took advantage of online courses available through Arizona State University but knew she needed to stay in the military for four years in order to use the GI Bill benefits and attend UVM.

“I’ve wanted to study Anthropology since I was in high school because I was interested in the forensic aspects of it,” Trisciuzzi said. “And I chose UVM because it has an awesome Anthropology program and the class sizes are usually small enough for you to have the opportunity to work closely with professors in order to achieve your goals.” Trisciuzzi has added Biological Sciences as a second major and intends on attending medical school after graduation.

“The military prepared me for going to school afterwards,” Trisciuzzi continued. “I had a little bit more discipline and appreciated it more than I think I would’ve if I went to college right after high school. I think the experience sets me apart in a good way: my professors recognize that I’m a little bit older and I am treated like a responsible adult.”

Peckenpaugh originally intended to major in Political Science but changed his mind after attending a Cultural Anthropology course taught by Professor Luis Vivanco in order to fulfill one of the University’s diversity requirements. “I liked the large-scale analysis in the poli sci courses,” Peckenpaugh said. “But I just found anthropology so much more interesting and easier to connect to my experience in the military.”

“When you deploy, you have to go through cultural courses to understand the area you’re going to—it’s not very much—but many of the things they teach you are out-of-date, you realize when you’re there that it’s out-of-date, and the real stuff you need to know you’re learning when you’re on the ground there with the people you’re meeting,” Peckenpaugh explained. “The people who are there are used to seeing Americans. So they would tell us, you know, when you go to their house, don’t show your feet to them, but they didn’t care at that point. There’s a different dynamic on the ground. Half the job is fighting the Taliban, the other half is getting the people in the area being ok with you being there and that comes down to really understanding and respecting their culture and I felt that was really interesting, seeing a different world. When you’re 18, 19 and you’ve only had the experiences of your culture and you show up to a completely different one, it can be a bit of a shock to see how other people live.”

Peckenpaugh also plans on applying to medical school after he graduates. “I miss a lot of the medical work I’ve done in military and civilian hospitals,” Peckenpaugh said. “I also really miss the austere environments.” His dream is to work abroad with Partners in Health, the international health organization co-founded by doctor and anthropologist Paul Farmer.

Both Trisciuzzi and Peckenpaugh are starting their fourth year of college this fall, and they praise the assistance they’ve received from David Carlson, UVM’s Coordinator of Student Veteran Services. Carlson served for four years in the United States Marine Corps as an Infantry Assault man from 2004-2008 and also used the Post-9/11 GI Bill to attend the University of Vermont. Interestingly, Both Carlson and Peckenpaugh served in the same unit but at different times.

“Veteran’s Services has been really helpful,” Trisciuzzi stated, noting that her military benefits have been pretty straightforward. “Anything I email in about it, I always hear back within a day or two. They take care of issues pretty quickly. And they keep me informed about Veterans programs that are going on at the school.”

Because of injuries they sustained during their time in the military and the impediments they face that could pose a challenge to their career ambitions, Trisciuzzi and Peckenpaugh are using Vocational Rehabilitation and Employment Benefits (VR&E) to attend UVM, which covers any training costs, tuition and fees, books, supplies, equipment, and special services needed by the veteran.

New Options for Veterans at UVM Through Online Degree Completion

This fall, UVM will launch its new Online Degree Completion Program, Bachelor of Arts (B.A.) with a major in Anthropology, allowing students to finish their bachelor’s degree outside of the traditional four-year undergraduate model.

The fully online program provides 60 credits toward the Bachelor of Arts in Anthropology major requirements paired with the minor requirements in English or Writing and is eligible for Veteran’s benefits. Both Trisciuzzi and Peckenpaugh believe it would provide an incredible opportunity for both active military members with some Baccalaureate-level experience and veterans who may struggle with the classroom setting or whose injuries make attending class on campus more challenging.

“Anthropology is one of those subjects you can get a lot out of from an online course,” Peckenpaugh stated. “For veterans, it’s not as hard to stay self-motivated and disciplined, so it will be useful. The military makes you very focused and independent. And anthropology is definitely one of those classes that translates well into the online format.”