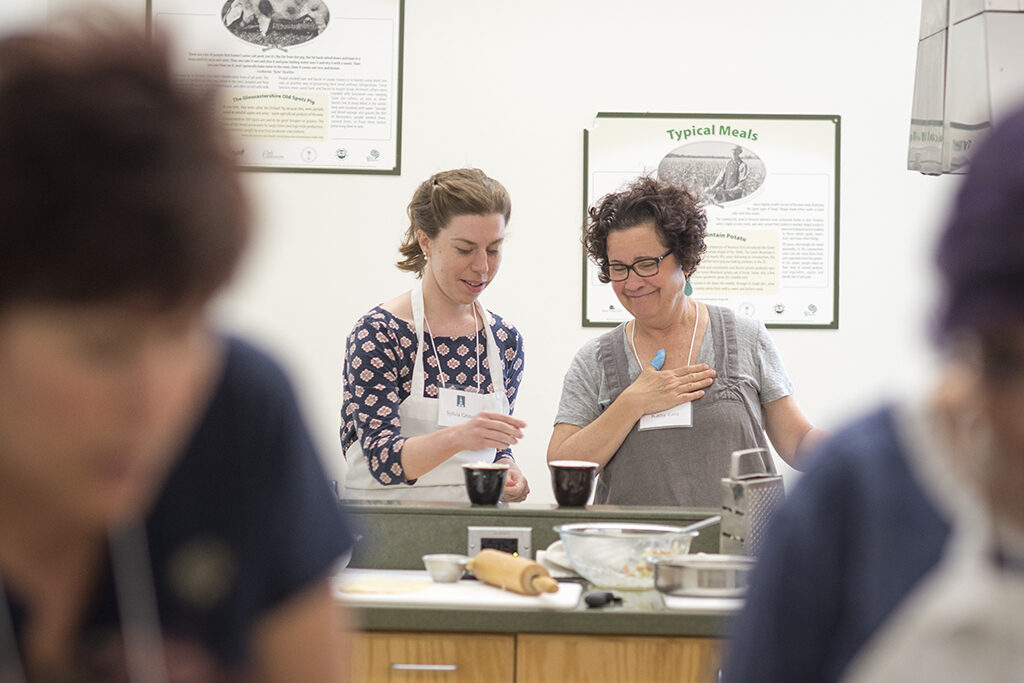 Sylvia Grove is incorporating more experiential learning practices in her college classroom. That means getting her students to eat, cook, and talk about food—in French.

Grove, a visiting assistant professor of French at Ursinus College in Pennsylvania, is taking a page out of noted educator and philosopher John Dewey, who believed that food was a central vehicle for teaching critical, intuitive thinking, and unifying knowledge with experience. His main approach to teaching was “learning by doing.”

Grove attended the UVM John Dewey Kitchen Institute to help enhance her French students’ learning experience. The three-day summer program attracts professionals from around the country to learn how to use cooking to teach any topic within a framework of collaboration and cooperation.

The Harrisburg resident had previously dabbled with using food as a learning tool in the classroom (conducting taste tests using American and French Nutella, for example). But she’s enhanced her approach since completing the UVM program last summer.

For example, her students at Ursinus recently completed a French oral exam entirely in the campus kitchen, working in teams using French recipes and later completing an analysis of their own French language skills.

“The stakes felt higher for some students but a lot said it felt like real life, which is what you’re going for,” she says. “The experience enlarged students’ scope of what learning looks like and allowed them to explore different potentials as they’re literally finding their own voice in French but also symbolically.”

Grove’s technical academic research revolves around food cultures and food in society. She also enjoys cooking. She and her cohort in June 2019 started the UVM program learning about different culinary techniques and concluded it by talking about the importance of experimentation and risk-taking in a kitchen setting.

She chose the John Dewey Kitchen Institute after completing the UVM Breakthrough Leaders for Sustainable Food Systems certificate program in 2018. Both programs helped Grove develop a 100-level French course with a weekly language lab in the campus greenhouse and garden at Ursinus College. (She will touch upon what she learned at UVM when she presents “Fertile Soil: French Studies in the Campus Garden” at the 20th & 21st Century French & Francophone Studies Colloquium at the University of Nebraska-Lincoln in March.)

At UVM, Grove made salads, a quiche, and a red sauce with anchovies. While setting out to make a blueberry crumble, she and her kitchen partner ran out of blueberries and couldn’t find another fruit to use. So, they tossed some carrots into their mixing bowl and gave it a go. Their decision to take a chance paid off as the carrots completely melted and gave the dessert a delicate sweetness that was unexpected.

“Where else but the kitchen could you take those kind of risks?” she says.

“I think that speaks to not only the organizers’ ability to make a strong class climate but also the potential of what using those methods in the classroom can do for our students,” she says. “The UVM John Dewey Kitchen Institute is a non-conventional way to approach an element of teaching that should be very basic, which is getting students to have agency and initiative, and to work together and understand each other.”